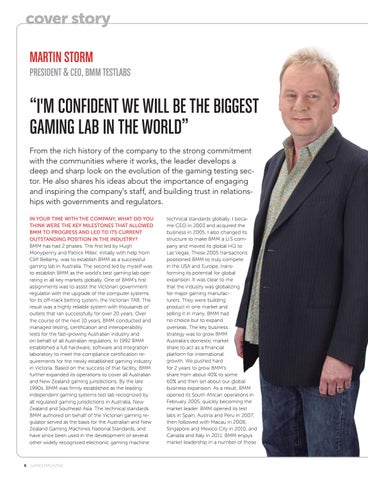 “I&#39;M CONFIDENT WE WILL BE THE BIGGEST GAMING LAB IN THE WORLD” From the rich history of the company to the strong commitment with the communities where it works, the leader develops a deep and sharp look on the evolution of the gaming testing sector. He also shares his ideas about the importance of engaging and inspiring the company&#39;s staff, and building trust in relationships with governments and regulators. In your tIme wIth the company, what do you thInk were the key mIlestones that allowed Bmm to progress and led to Its current outstandIng posItIon In the Industry? Bmm has had 2 phases. The irst led by Hugh monypenny and Patrick miller, initially with help from Clif Bellamy, was to establish Bmm as a successful gaming lab in australia. The second led by myself was to establish Bmm as the world’s best gaming lab operating in all key markets globally. One of Bmm’s irst assignments was to assist the Victorian government regulator with the upgrade of the computer systems for its of-track betting system, the Victorian TaB. The result was a highly reliable system with thousands of outlets that ran successfully for over 20 years. Over the course of the next 10 years, Bmm conducted and managed testing, certiication and interoperability tests for the fast-growing australian industry and on behalf of all australian regulators. in 1992 Bmm established a full hardware, software and integration laboratory to meet the compliance certiication requirements for the newly established gaming industry in Victoria. Based on the success of that facility, Bmm further expanded its operations to cover all australian and new zealand gaming jurisdictions. By the late 1990s, Bmm was irmly established as the leading independent gaming systems test lab recognized by all regulated gaming jurisdictions in australia, new zealand and southeast asia. The technical standards Bmm authored on behalf of the Victorian gaming regulator served as the basis for the australian and new zealand Gaming machines national standards, and have since been used in the development of several other widely recognized electronic gaming machine

technical standards globally. i became CeO in 2003 and acquired the business in 2005. i also changed its structure to make Bmm a U.s company and moved its global HQ to Las Vegas. These 2005 transactions positioned Bmm to truly compete in the Usa and europe, transforming its potential for global expansion. it was clear to me that the industry was globalizing for major gaming manufacturers. They were building product in one market and selling it in many. Bmm had no choice but to expand overseas. The key business strategy was to grow Bmm australia’s domestic market share to act as a inancial platform for international growth. We pushed hard for 2 years to grow Bmm’s share from about 40% to some 60% and then set about our global business expansion. as a result, Bmm opened its south african operations in February 2005, quickly becoming the market leader. Bmm opened its test labs in spain, austria and Peru in 2007; then followed with macau in 2008, singapore and mexico City in 2010, and Canada and italy in 2011. Bmm enjoys market leadership in a number of those

The leading Latin American publication for the global gaming industry. 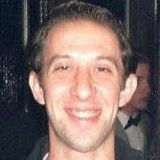