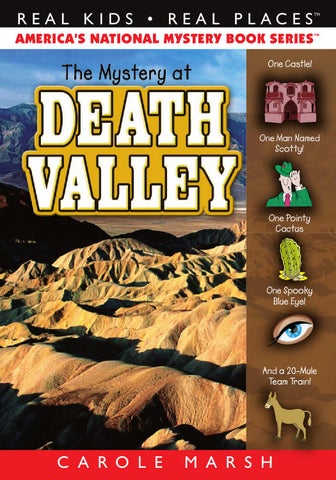 The ghost of Death Valley Scotty hovered on the near side of the estate. It was almost high noon. The castle—known as Scotty’s Castle, after him—shimmered like a mirage in the 100-degree heat rising off the desert floor. The white stucco glistened blindingly in the sun. The red terra-cotta tiles of the roof glowed as if alive with fire. The backdrop of massive mountains and brilliant blue sky really set off the castle, Scotty thought. A ruffle of

green trees, thriving happily in their challenging environment, flapped as though in greeting to him, in the rare, surprising breeze. Scotty liked to watch the visitors. He liked to see them “ooh” and “aah” and crane their necks, sashay across the bridge that joined the main house to the guest building, and climb the crenelated tower that looked right out of an Arabian knights’ fairytale. He especially liked to watch them snap roll after roll of photographs. Memories, he thought, memories were why he couldn’t quite leave, couldn’t quite bear to finally and completely give up his castle. Scotty felt he had to stay nearby, perhaps needed to stay close, to keep watch by noonday sun and moon-glade night over the castle blessed, or cursed, with his name. But now, years and years after he was buried atop Windy Hill, overlooking the castle, he guessed he was literally much more a part of the death in Death Valley than the vibrant life that still (well at least for awhile each day) filled his former home.

Perhaps it was time for him to “rest in peace.” Perhaps. Perhaps not.

In the back seat of the car, Erin tossed and turned in a snarl of blanket. A strange eerie dream roamed through her dark-haired head. There was a vision of a monstrouslylarge thing that glowed from without and within as though infested with, and borne by, gigantic fireflies. Wind moaned sadly as if it was the chant of a ghost. And yet, there was the lilting tinkle of happy talk and satisfied laughter in the

background. First the wind. Then the laughter. Then the wind, as though two opposing forces sought control of this massive, night-flickering illusion. Erin’s mind’s eye looked into the giant golden eye of . . . of what? A light of lace, panes of gold? A boy, a man? with a sack, leading a beast, or led by a beast, spun through her brain. A skinny black cross loomed, then grew larger as though zoomed in upon with a telescopic lens. In her fitful sleep, Erin gasped, and the cross shattered into a mosaic of black: big black shapeless heaps, slats of black flew by, a lava-flow of black seemed to suck her down . . . down . . . down, until: Her dad hit a pothole—BUMP! Erin popped up, instantly wide-awake. She threw off the blanket and discovered she was damp with sweat. “Are we there yet?” she mumbled, rubbing her eyes. “There yet?” her parents said in unison. “You saw the map, Erin,” her mom reminded her. “We are still hundreds and hundreds of miles away.” 46

“Well, you seem to be in a little better spirits!” Erin’s mom said. “I’m in blueberry pancake spirits,” Erin hinted. It was morning. It was Nevada. It was Route 66. And it was time for breakfast. “Daaaaaaaad,” Erin pleaded when there was no response from the front seat. Her mother was busy reading USA Today; her father was singing Achy Breaky Heart at the top of his lungs.

They stopped for breakfast at a weirdlooking diner that looked like something out of an old-timey movie. “This looks like the kind of place we wouldn’t normally stop at,” Erin reminded her mother as they went through a door that was actually the heel of a big, blue boot. “Oh, this isn’t that kind of place,” Erin’s mother said, “this is nostalgic!” Erin didn’t know about nostalgic, but her nose told her the food smelled very, very good. “Haven’t you ever heard of Route 66?” her dad asked as they slid into a hot pink booth that had a gold star for a table. “It was the first real highway across the country, after the automobile was invented.” Erin gave her dad a dubious look. Her parents were old—thirty-something—but they weren’t that old! And this wasn’t exactly the interstate, she thought, looking out the window. This was nowhere—maybe even a few miles past it.

Her father passed lime green saguaro cactus menus around and continued his explanation. “It was a big deal to ride this road. The first motels were built along 66—nobody ever needed such a thing until they started traveling by car across America. Diners sprung up like daisies.” Erin looked around and decided that this place had probably been around as long as the first cars. “They even made a TV show based on Route 66,” her dad added before he stuck his nose in the menu. But Erin felt pretty sure he must be making that up. She decided on a short stack of “cactus cakes” with rattlesnake (orange) juice. Yum. 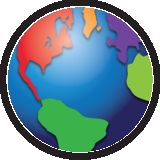 The Mystery at Death Valley

Mimi tells Christina and Grant a mystery story set in Death Valley, one of the most desolate places on Earth! There's Aunt Erin, a creepy ca...

The Mystery at Death Valley

Mimi tells Christina and Grant a mystery story set in Death Valley, one of the most desolate places on Earth! There's Aunt Erin, a creepy ca...