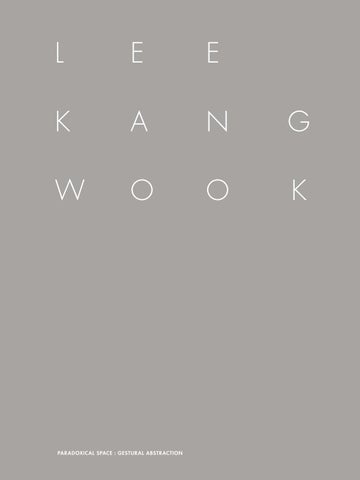 first exhibition in 2017. In 2013, Lee successfully finished his solo exhibition at

Gallery HUUE, and numerous collectors now own his works. We look forward

the two contrasting concepts co-exist. In his new series, The Gesture, the artist

solves his concerns about the essence of painting, and leaves traces of his

HUUE – three years after his first solo exhibition in Singapore.

painterly-like actions. The artist stated: “I asked some basic questions, such as what painting is and why I am painting.” To Lee, a lot of these questions

were raised when studying in London. His paintings are created by using

traces of paints which are repeatedly spread by a sponge, or blown by mouth

where he managed to sell all of his submitted exhibition works. After his

on top of colorful backgrounds. The resulting colors, from numbers of layers,

initial success, he went to study in England in order to expand internationally,

exist like individual tones rather than colors. The detailed drawings on top of

studies. While studying in England he continued his career as an artist, and

required great effort at a glance, but they are actually the ones that reveal the

participated in several group exhibitions. He held a solo exhibition not only in

identity of painting while creating ‘illusory’ spaces. Color is not just a visual

England and South Korea - but also in Japan and Singapore. Upon his return

phenomenon, but an organic being which arouses abstract feelings and gives

to Korea, after finishing his studies in his final year, Lee signed an exclusive

an opportunity to reconsider existing meaning to the artist. Therefore, although

contract with the Arario Gallery, run by one of the world’s top 100 art

the artist uses diverse colors in his works, each work is completed in a single

collectors, Chang-il Kim, and became a professor at the prestigious art school

tone with delicate touches, and leaves his audience’s eyes glued to the canvas.

at Hongik University. The course of his life henceforth demonstrates how

Contrasting concepts of the world depicted in his works allow organic

sincerely Lee has built his career as an artist.

beings to exist neither too heavily nor too lightly within his painting, as referenced within the title of his thesis for his doctorate in London, Aesthetics

of Moderation. In Kang-wook Lee’s painting, when moderation and

business space, and finally had the opportunity to meet with the artist when

discernment, contemplation and echoes of the inner side, and painting-ness

and decorativeness coexist, the gestures in the paradoxical world are seen like

exhibitions. In 2013, I grew more and more interested in his painting world

forms of imagination beyond their original meanings.

after taking the initiative to invite him to the solo exhibition at the gallery in Singapore.

The New World | Abstract paintings can typically be divided into two groups, depending on their purpose. One group is subjective abstraction, with the

enthusiastic expressions of an artist’s inner world in irregular forms and colors,

some sort of refinement, which was neither too light nor too heavy. There

and the other is hard-headed abstraction, with a minimum form and color in a

was no specific form in his abstract painting, but small and big dots were

moderated background with typical elements such as vertical and horizontal

repeatedly drawn like some kind of a cell in layers, and they visually broke the

lines and circles. Unlike many abstract artists, who rely on imagery and

flatness of the surface and created a new form within the distance. I observed

expression rather than a story, Kang-wook Lee’s works can have philosophical

how much those visualized forms finely glittered under sparkling beads, or on

and scientific explanations. Lee’s current paintings even feature a double-

top of spreads of paint in Lee’s abstract painting. This exhibition in Singapore

sidedness which enables him to continuously study his basic action of painting.

aims to examine the changes and aspects of Lee’s works in the existing series,

Thus, his paintings which evoke both emotional and intellectual aspects must

Invisible Space, and a new series, The Gesture.

be considered the new neo-abstraction. His very structured yet free, cold but soft, and empty yet full works convey both primitive and modern feelings,

Invisible Space | The artist has consistently established his art world, since the

dependent on the change of colors. As the opposite or contrasting elements

1990’s, by studying macroscopic and microscopic worlds. When the artist

are layered and mixed in one space, new originality is created, as if the thesis-

worked in the subject of the similarity of those two worlds, he understood that

antithesis-synthesis paradigm has been applied.

the elements in both of these worlds could be seen as one, based on what he had continuously studied in the Upanishads, the ancient Hindus collection of texts of religious and philosophical nature. His paintings, with delicate lines and light colors floating upon surfaces, initially resemble cells in an extremely abstract image, but as they are viewed more closely they seem to represent a big space which cannot be estimated if it was viewed from its wideness, or from the unified space of macroscopic and microscopic worlds. Kang-wook Lee’s painting, Invisible Space, studies the imaginary world where his two contrast concepts of space exist, and simultaneously visualizes traces of senses.

2001 Graduated from Department of Painting, College of Fine Arts,

2003 Graduated from Graduate School of Department of Painting,

The 10th Contemporary Art of Korea and Japan,

He works and lives in London and Seoul.

Professor of Department of Painting,

The Light of Korean Contemporary Painting, The True of Retina, Interalia, Seoul

The 9th Contemporary Arts of Korea and Japan,

55 Contemporary Artists Selected by Critics under

Contemporary Art of Korea and Japan,

A Trio Exhibition, Gallery Happiness of the Art, Seoul

Beyond the Visible, Nook Gallery, Seoul

The 1st Seoul Young Artist Biennial, For the Mutual Understanding of Contemporary Arts

between Korea and America,

HUUE PTE. LTD. 17B Mohamed Sultan Road, Singapore, 238966 T +65 6334 2805 E info@galleryhuue.com W www.galleryhuue.com | www.huuecraft.com Â© Gallery HUUE 2017 Copyright concerning the exhibition leaflet belongs to Gallery Huue. No part of this publication may be reproduced or transmitted in any form without the prior written permission from the publisher.