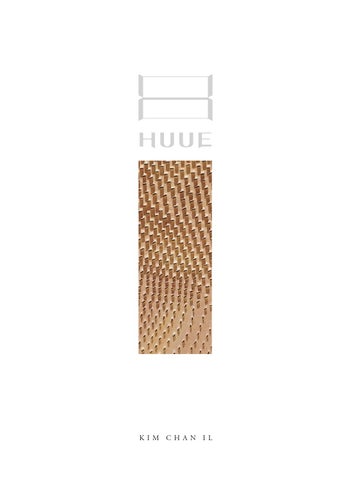 The Impression of Line Since the founding in 2010 as Art On Gallery, we’ve introduced Korean artists to Singapore via an array

of enriching exhibits featuring renowned and up-and-coming artists. Now with the new name Gallery Huue, we plan to continue on our journey with a rejuvenated effort, largely thanks to our newly renovated space designed specifically for the purpose of showcasing Korean art. Kim’s artworks effortlessly embody the understated elegance, and we specifically selected Kim due to

the fact his artwork captures the artistic direction of our gallery. His works evokes a calm and medita-

tive first impression that eases the mind into a tranquil state. This emotion soon gives way to astonish-

ment as the viewer draws in closer to observe the small pieces of board that have been laboriously erected one by one on the canvas. The juxtaposition of calm then awe brings the viewer into a euphoric state moved by the polar emotions reminiscent of the calm after an earthshaking thunderstorm. The most prominent characteristics of Kim’s work are the irregular contour and unique forms of lines that run across the flat canvas in such a way that the forms pop towards the audience. Since his earlier works which used puncture and protruded dots, Kim’s developed a style utilizing the more evolved contoured, uneven lines. Kim’s works consist of the essence of any painting- simple dots and lines. Then he takes these simple forms to the next level by revolting against the status quo concept of ‘painting on a plane’ via literally creating away from the plane. His line series exist somewhere between sculpture and painting, so that critics often refer to the works as ‘post painterly’, ‘drawing objet’. Kim creates his work by first filling the canvas with small black paper board pieces of various heights which are adhered to the plane in regular gaps under a meticulous plan. Next the paper is repeatedly layered then peeled off of oil paint or pigment powder making for an extremely arduous process. Lastly, a layer of metallic monotonous color is carefully laid out for a final touch. What starts as a somewhat busy-looking mass of innumerable lines soon transforms into an intellectually stimulating and elegant display of art. The end result is an artwork with the form of ‘Bas-Relief painting’ that goes beyond a flat plane painting. As such, it can be said that Kim creates something close to three-dimensional structure through an innovative use of a traditional painterly medium. This unique approach is a trademark that Kim has nurtured over the years. The countless short lines, erected meticulously, seem to fall in good order to produce various expressions. In effect this creates distinctive visual illusions of light and dark and of concentration and dispersion, which contrast to form wave-like vibrations that resonate with the primordial visual instincts. His recent paper works, in contrast, makes lines of punctures on paper, which is then covered with corrosive material to make the paper look like metal. The metallic hue births an interesting materialistic variation to the theme of his existing relief painting. The aggregations of lines expressed in various forms are the foundation of Kim’s artworks that evokes figurative imaginations that let the viewer run wild in their interpretations of the art. This solo exhibition showcases not only Chanil Kim’s latest works but a variety of works that he has continuously worked on over the years. We hope this exhibition will serve as a rare opportunity where audiences can immerse into Kim’s evolving artistic world of waves that undulates above and onto the surface of two-dimensional plane.

Drawing lines with Objets The recent works of Kim Chanil emphasize much more on objets and post painterly abstraction. He adhered objets and oil paints doggedly and then minced them thinly. The skin-like canvas dramatically stimulate the viewer’s senses of touch and sight. Kim’s works are flitting on the boundary of sculpture and painting to obscure it. Eventually, they have a new physical property. These bas-relief paintings are not only optical but also kinetic. Interestingly, Kim is riding the crest of art history and at the same time getting his own way. As a matter of fact, the recent paintings pursue visual attention in the wake of hyper realism. Many artists struggle to make extreme visual effects with mighty decorative stimuli. Under the influences of the old-fash-ioned optical art and the dazzling web images, they attempt to dramatize situations using optical illusions. They transfer sensual illusions from a computer monitor to a plane canvas. They create the unconventional and intense images that stimulate the viewers’ retina. It is interesting that the illusive plane paintings make a reappearance in the digital era. Fundamentally, paintings have pursued making visual effects stirring up the viewers’ vision. Paintings have stimulated the viewers’ retina with optical illusions, then with no illusions, and then with extreme illusions. Also, they have continuously reformed and redefined themselves absorbing other contemporary popular visual images. Kim stimulates the viewers’ sense of touch setting up vibrations on the canvases. Recently, his focus has moved from dots to lines. His canvases are not the habitats of the paintings but toe newly-developed materials. In other word, he regards a canvas as an objet with a special skin (or a physical property). He does not repeat the fixed images nor express his thoughts or feelings directly. Instead, he creates illusive virtual images with some strange texture that strongly stimulates the viewers’ retina. As encountering with kim’s paintings, the viewers will clean forget to identify the objet and the meaning, the way of expression. The canvas, on which all the desires for description and expression are retrained and evaporated, causes a ripple and leaves an afterimage in the viewer’s mind. He experiments in pictorialism which completely depends on the sense of sight, researching a new creative expression method. His canvas has not only post painterly modifications but also painterly appeal. He makes a new start to pictorialism at the end of pictorialism. Kim draws a painterly but post painterly painting in the alchemistic process, which nobody has not tried yet.

Paper works give way to new endeavors thematically and technically. Uneven lines in the canvas are illustrated through punctured holes. I made a conscious effort to create a unique property matter that is close to an objet through the use of corrosive materials together with paint, and by doing so I have produced color variation that makes the paper look like a metal plate or a piece of objet. Unevenly contoured lines of punctures, combined with the diverse materialistic feel of the paper works, unleashes a newly expanded space for imagination by the viewers. The display evokes a meditative impression through the color variations which alter depending on the viewpoint, and the lines which are repetitive, yet ever changing, and continuing while attempting to discontinue. All of these elements correspond to the viewerâ&#x20AC;&#x2122;s emotions and make way for continued imagination. Kim, Chanil

A Specialist in Contemporary Korean Art & Craft We at HUUE (formerly known as Art On) specialize in showcasing and consulting the realm of contemporary Korean art & craft. Founded in 2010, Gallery Huue serves as the one and only gallery in Singapore that focuses solely on this particular genre. Our mission is to bring the magic of art to everyday spaces and enrich people’s lives. We do this through various projects and exhibitions curated in delightful and easy-to-understand ways that feature diverse array of artworks. Frequently, our exhibitions feature the most reputable artists in Korea today, but we also branch out from the mainstream names to support young artists through shows like our annual exhibit “Young Revolution”. When one visits our Gallery Huue space in Singapore, they are immediately immersed into a comfortable residential space- a two-level condominium remodeled and designed to fit our vision of the gallery. The gallery feels more like a home than the typical cold and cubic space of a white-cube gallery, and one can really feel at ease as they enjoy the collections. As visitors journey from one floor to another they observe a harmonious space with an accumulation of fine art and crafts around every corner. In Korean “Huue” means to purposefully stop and admire beauty in a restful, meditative state. We want our gallery to be a place where visitors can experience the meaning of the word by escaping the busy world to retreat into a relaxed atmosphere dedicated to art, tranquility and beauty.

Published by I Gallery HUUE

â&#x201C;&#x2019; Copyright concerning the Exhibition leaflet belongs to Gallery HUUE. No part of this book may be reproduced or transmitted without written permission from the publisher.