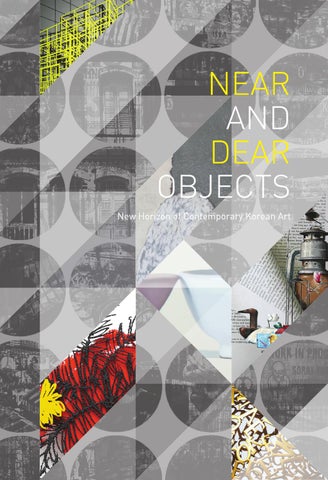 Near and Dear Objects New Horizon of Contemporary Korean Art

New Horizon of Contemporary Korean Art Art history has made a dramatic turn in the late 20th century. Artists have started to spill out experimental works using new medium. These experimental works held their value and meaning in their effort to overcome the logic of modernism. However, that was just a start of trial and error in the art world, one of the many efforts in seeking new possibilities in art. In order for the trend to stand as a style, it needs to gain the sympathy from the public, as was the case with previous art genres. It is in such context that 7Adam Gallery and Art On Gallery are jointly hosting an exhibition of seven artists in hope to open a new horizon for the public reference. Near and Dear Objects We have invited seven Korean artists currently in the limelight in the Korea and Singapore art scene. The recurring theme in the artworks of this exhibition features either a common product or scenery easily seen around us. Then what is it that makes them stand out in the flood of contemporary art? Their unique styles of expression catch viewer’s eyes despite their simple embedded stories. Attractive in themselves, yet don’t necessarily require the viewers to solve the puzzle or to overcome their intuition in order to grasp the artists’ intention, this series of work have opened a new horizon in popularizing contemporary Korean art. According to Russian literary critic Victor Skolovski, the function of an artist is to stimulate senses towards unfamiliarity as well as towards the beauty of the common. He says that the artist approaches common things in fresh new angle and lifts it up to a new dimension of senses or perception. Near and Dear Objects Exhibition brings together artists whose works seek to provide the audience with fresh new angles to the familiar by changing its forms and dressing it with unique colours. Taking things out of their ordinary context, these artworks challenge the preconception of the objects’ functionality and meaning; they reflect a mixture of the artists’ creative imagination and fantasy in their play with their near and dear objects.

, A Specialist in Contemporary Korean Art Art On Gallery is a Singapore based art consultancy that specializes in Korean contemporary art and craft. The gallery provides total art consulting service from art selection to installation and after service management. Our mission at Art On Gallery is to discover and nurture young and talented artists from Korea and introduce them to Singaporeâ&#x20AC;&#x2122;s local art scene through its regular exhibitions of progressive themes. As well as discovering young artists, the gallery also represents some of the most renowned veteran Korean artists whose works are sought after by collectors all over the world. Art On Gallery is also actively engaged in endeavors to make fine art as part of everyday living space. www.artondeco.com

7Adam is a unique concept integrating an art gallery with a chic and modern restaurant serving European food with a twist of Asian fusion. Housed in a black and white bungalow, the ambience is tinged with old world grandeur and oozes intimate charm and elegance at the same time. Specializing in contemporary paintings and sculptures, the works of art can be found throughout the gallery-restaurant and its dedicated alfresco area. The galleryâ&#x20AC;&#x2122;s objective is to promote strong local and regional artists and help art collectors with planning their art selection and collection. In addition to the solo exhibitions for both established and up-and-coming artists from Singapore and in the region including Eng Tay, Kumari Nahappan, Ling Yang Chang, Sujak Rahman, Zhu Hong, Deusa Blumke and Dawn Kwan, 7Adam has also held various group exhibitions and art talks by local and regional artists. The gallery has also secured various commissioning of public art projects in Singapore. www.7adam.com

ⓒ Copyright concerning the Exhibition Catalogue belongs to Art on Gallery and 7 Adam Gallery Restaurant. No part of this book may be reproduced or transmitted without written permission from the publisher.