Understanding the challenges children with ASD face with their surroundings 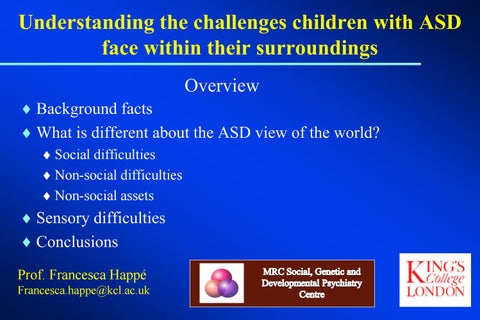 in numbers with ASD probably due to better recognition, widening criteria, etc

What is different about the ASD view of the world? Social difficulties ‘Theory of mind’ = recognising others’ thoughts, beliefs, desires …putting yourself in another person’s shoes Tested by ability to attribute a false belief (3 years+)

Social Insight is a ‘gatekeeper’

• orient to others’ eye gaze, pointing, etc • interested in what others find interesting • infer thoughts/feelings behind actions • imitate others’ actions Paying attention to others becomes second-nature

Eye tracking studies â&amp;#x20AC;&amp;#x201C; what do people with ASD pay attention to?

Mind-blindness in the Classroom? Look at me when I‟m talking to you!

Even signs need some mindreading

What is different about the ASD view of the world? Non-social difficulties

Difficulties with flexibility and practicalities of life often limit independent living, even with very high intelligence

What do we do when our frontal lobes are overloaded?

What is different about the ASD view of the world? Non-social assets -

What is different about the ASD view of the world? An eye for detail

Can you spot the difference?

What matters to you is never ‘tiny’…

Does detail-focus spark talent? Eye for detail is related to talent in music, maths, art of memory (HappĂŠ &amp; Vital, 2009) Passionate special interests can be used to motivate wider learning

What does the person with ASD see?

What counts as the same?

under-responsivity e.g., failure to orient to name or react to pain

over 90% of children with ASD have sensory symptoms in multiple domains Leekam et al. (2007)

to use context? (predictionreduced perceived intensity)

likes and dislikes are idiosyncratic, vary between and even within individuals with ASD

some are more predictable, and can be considered in planning the environment….

of translation between ASD and ‘Neurotypical’ views

stimuli are the most salient aspect of environment for NTs

interests and sensory fascinations can be great motivators (or distractions)

Understanding the challenges children with ASD face with their surroundings 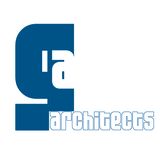