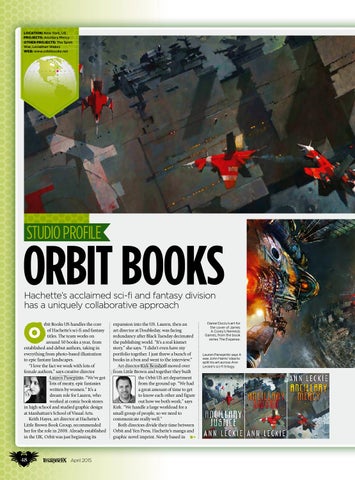 rbit Books US handles the core of Hachette’s sci-fi and fantasy titles. The team works on around 50 books a year, from established and debut authors, taking in everything from photo-based illustration to epic fantasy landscapes. “I love the fact we work with lots of female authors,” says creative director Lauren Panepinto. “We’ve got lots of meaty, epic fantasies written by women.” It’s a dream role for Lauren, who worked at comic book stores in high school and studied graphic design at Manhattan&#39;s School of Visual Arts. Keith Hayes, art director at Hachette’s Little Brown Book Group, recommended her for the role in 2008. Already established in the UK, Orbit was just beginning its

expansion into the US. Lauren, then an art director at Doubleday, was facing redundancy after Black Tuesday decimated the publishing world. “It’s a real kismet story,” she says. “I didn’t even have my portfolio together. I just threw a bunch of books in a box and went to the interview.” Art director Kirk Benshoff moved over from Little Brown and together they built the Orbit US art department from the ground up. “We had a great amount of time to get to know each other and figure out how we both work,” says Kirk. “We handle a large workload for a small group of people, so we need to communicate really well.” Both directors divide their time between Orbit and Yen Press, Hachette’s manga and graphic novel imprint. Newly based in

Daniel Dociu’s art for the cover of James A Corey’s Nemesis Games, from the book series The Expanse.