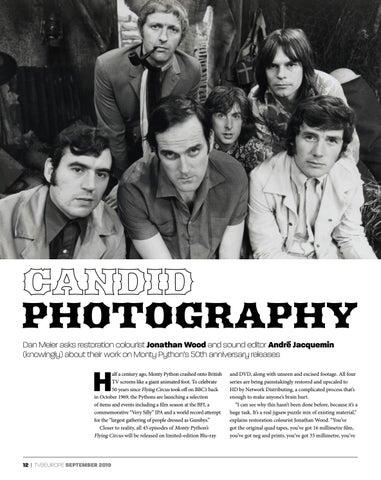 alf a century ago, Monty Python crashed onto British TV screens like a giant animated foot. To celebrate 50 years since Flying Circus took off on BBC1 back in October 1969, the Pythons are launching a selection of items and events including a film season at the BFI, a commemorative “Very Silly” IPA and a world record attempt for the “largest gathering of people dressed as Gumbys.” Closer to reality, all 45 episodes of Monty Python’s Flying Circus will be released on limited-edition Blu-ray

and DVD, along with unseen and excised footage. All four series are being painstakingly restored and upscaled to HD by Network Distributing, a complicated process that’s enough to make anyone’s brain hurt. “I can see why this hasn’t been done before, because it’s a huge task. It’s a real jigsaw puzzle mix of existing material,” explains restoration colourist Jonathan Wood. “You’ve got the original quad tapes, you’ve got 16 millimetre film, you’ve got neg and prints, you’ve got 35 millimetre, you’ve