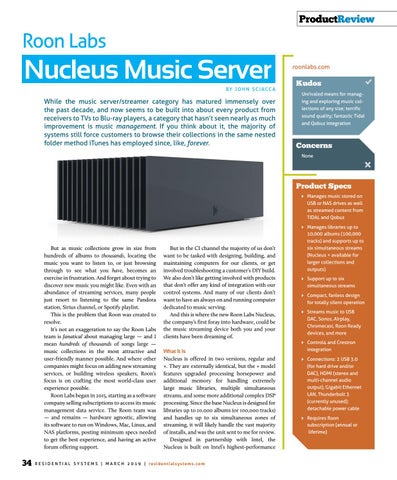 While the music server/streamer category has matured immensely over the past decade, and now seems to be built into about every product from receivers to TVs to Blu-ray players, a category that hasn’t seen nearly as much improvement is music management. If you think about it, the majority of systems still force customers to browse their collections in the same nested folder method iTunes has employed since, like, forever.

But as music collections grow in size from hundreds of albums to thousands, locating the music you want to listen to, or just browsing through to see what you have, becomes an exercise in frustration. And forget about trying to discover new music you might like. Even with an abundance of streaming services, many people just resort to listening to the same Pandora station, Sirius channel, or Spotify playlist. This is the problem that Roon was created to resolve. It’s not an exaggeration to say the Roon Labs team is fanatical about managing large — and I mean hundreds of thousands of songs large — music collections in the most attractive and user-friendly manner possible. And where other companies might focus on adding new streaming services, or building wireless speakers, Roon’s focus is on crafting the most world-class user experience possible. Roon Labs began in 2015, starting as a software company selling subscriptions to access its music management data service. The Roon team was — and remains — hardware agnostic, allowing its software to run on Windows, Mac, Linux, and NAS platforms, posting minimum specs needed to get the best experience, and having an active forum offering support.

But in the CI channel the majority of us don’t want to be tasked with designing, building, and maintaining computers for our clients, or get involved troubleshooting a customer’s DIY build. We also don’t like getting involved with products that don’t offer any kind of integration with our control systems. And many of our clients don’t want to have an always on and running computer dedicated to music serving. And this is where the new Roon Labs Nucleus, the company’s first foray into hardware, could be the music streaming device both you and your clients have been dreaming of. What It Is Nucleus is offered in two versions, regular and +. They are externally identical, but the + model features upgraded processing horsepower and additional memory for handling extremely large music libraries, multiple simultaneous streams, and some more additional complex DSP processing. Since the base Nucleus is designed for libraries up to 10,000 albums (or 100,000 tracks) and handles up to six simultaneous zones of streaming, it will likely handle the vast majority of installs, and was the unit sent to me for review. Designed in partnership with Intel, the Nucleus is built on Intel’s highest-performance