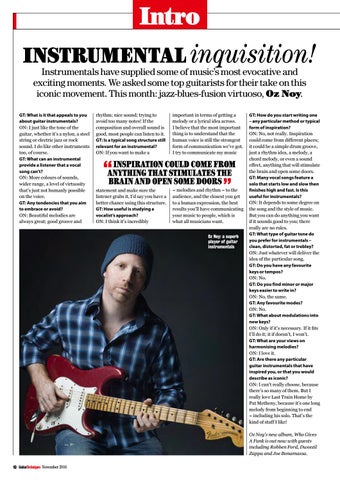 Intro Instrumental inquisition! Instrumentals have supplied some of music’s most evocative and exciting moments. We asked some top guitarists for their take on this iconic movement. This month: jazz-blues-fusion virtuoso, Oz Noy.

GT: What is it that appeals to you about guitar instrumentals? ON: I just like the tone of the guitar, whether it’s a nylon, a steel string or electric jazz or rock sound. I do like other instruments too, of course. GT: What can an instrumental provide a listener that a vocal song can’t? ON: More colours of sounds, wider range, a level of virtuosity that’s just not humanly possible on the voice. GT: Any tendencies that you aim to embrace or avoid? ON: Beautiful melodies are always great; good groove and

rhythm; nice sound; trying to avoid too many notes! If the composition and overall sound is good, most people can listen to it. GT: Is a typical song structure still relevant for an instrumental? ON: If you want to make a

important in terms of getting a melody or a lyrical idea across. I believe that the most important thing is to understand that the human voice is still the strongest form of communication we’ve got. I try to communicate my music

inspiration could come from anything that stimulates the brain and open some doors statement and make sure the listener grabs it, I’d say you have a better chance using this structure. GT: How useful is studying a vocalist’s approach? ON: I think it’s incredibly

– melodies and rhythm – to the audience, and the closest you get to a human expression, the best results you’ll have communicating your music to people, which is what all musicians want. Oz Noy: a superb player of guitar instrumentals

GT: How do you start writing one – any particular method or typical form of inspiration? ON: No, not really. Inspiration could come from different places; it could be a simple drum groove, just a rhythm idea, a melody, a chord melody, or even a sound effect, anything that will stimulate the brain and open some doors. GT: Many vocal songs feature a solo that starts low and slow then finishes high and fast. Is this useful for instrumentals? ON: It depends to some degree on the song and the style of music. But you can do anything you want if it sounds good to you; there really are no rules. GT: What type of guitar tone do you prefer for instrumentals – clean, distorted, fat or trebley? ON: Just whatever will deliver the idea of the particular song. GT: Do you have any favourite keys or tempos? ON: No. GT: Do you find minor or major keys easier to write in? ON: No, the same. GT: Any favourite modes? ON: No. GT: What about modulations into new keys? ON: Only if it’s necessary. If it fits I’ll do it; it if doesn’t, I won’t. GT: What are your views on harmonising melodies? ON: I love it. GT: Are there any particular guitar instrumentals that have inspired you, or that you would describe as iconic? ON: I can’t really choose, because there’s so many of them. But I really love Last Train Home by Pat Metheny, because it’s one long melody from beginning to end – including his solo. That’s the kind of stuff I like! Oz Noy’s new album, Who Gives A Funk is out now with guests including Robben Ford, Dweezil Zappa and Joe Bonamassa.