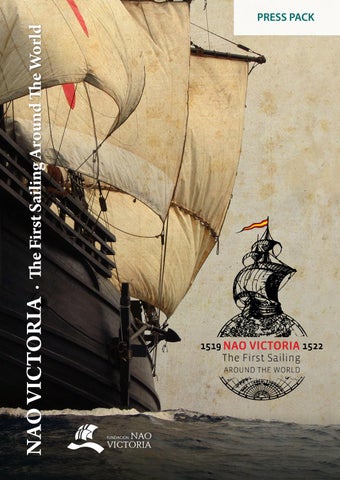 NAO VICTORIA Â· The First Sailing Around The World

The Nao Victoria was Ferdinand Magellan and Juan Sebastián El Cano’ ship, which reached the greatest adventure in the maritime history: the first circumnavigation of the world in the 16th century (1519-1522). “The Spice Route Armada” The expedition comprised five ships and had a crew of 243 men, commanded by Ferdinand Magellan. It set sail from the port of Seville (Spain) on the 10th of August of 1519. It was known as Armada de la Especiería (Spice Route Armada) and it was financed by the Spanish Crown, since its goal was to find a new westbound route to reach the Moluccas, islands known back then as the Spice Islands (now Indonesia).

They sailed across the immense Pacific Ocean, discovered islands and archipelagos and finally reached the Philippines and the Moluccas. The Nao Victoria, the only ship to survive the voyage, started her return trip under the command of Juan Sebastián Elcano. Having crossed the For three years, the expedition sailed across Indian Ocean, the ship arrived to the African three oceans, arrived to Brazil, Uruguay and continent, navigated south to round the Cape ARTIC OCEAN Argentina and discovered the Strait of Magellan. of Good Hope and returned to Spain.

The Victoria, commanded by Juan Sebastian Elcano, reached port at Seville thus being the first ship to sail around the world September 8, 1522

The Trinidad, Concepcion and Victoria crossed the Pacific Ocean April 1, 1521

The Trinidad and Victoria arrives to Moluccas Island March 6, 1521

The Trinidad is arrested by portuguese

The Victoria begun her way back to Spain from Timor March 18, 1522

Vial, who made an exhaustive historical research on its forms and details. Carpenters and engineers worked hard and eight months later the ship was ready to be launched. When the construction was completed, the Nao Victoria remained on display during the EXPO’92, together with the replicas of the nao Santa María and the caravels Pinta and Niña, all three Christopher Columbus’ ships. These ships, permeated with history, were visited by more than three million people. On the 8th of September of 1522, eighteen men returned to Seville without truly realizing that they had accomplished the greatest adventure in the maritime history: the first round-theworld voyage.

After the Universal Exposition, the Nao Victoria was installed on land to allow visitors to admire her from all angles, thus becoming a star exhibit at the Seville Sailing Pavilion (Pabellón de la Navegación).

The replica of the Nao Victoria

The replica was built for the EXPO, the World’s Fair that was held in 1992 in Seville, capital of the autonomous community of Andalusia and the original nao’s port of origin. The Nao Victoria is the only replica of the original ship that managed to circumnavigate the world.

In 2003, we presented the project of the Nao’s circumnavigation of the world to the State Society for the Management of Assets (Sociedad Nacional de Gestión de Activos) and to the National Society for International Exhibitions (Compañía Nacional de Exposiciones Internacionales). Both institutions decided to support the initiative with great enthusiasm. The restoration and preparation of the ship for navigation were initiated immediately.

The construction of the replica started in March of 1991 at Isla Cristina (Huelva- Spain). It was designed and constructed by Ignacio Fernandez

In 2004, the Nao Victoria’s replica repeated the epic journey of the first circumnavigation of the globe in order to promote this great maritime feat and the contribution of the Spanish sailors to geographical discoveries. The replica left Seville with 20 members of the crew onboard. From 2004 to 2006 it sailed

26,894 nautical miles, visited 17 countries on 5 different continents and became the first replica of a ship to complete the journey around the world. The Naos: ships of the discoveries age Naos were, with the caravels, the ships of the Spanish age of discoveries. These ships had a typical round-bottomed hull, a forecastle and a poop deck, and were designed for the great atlantics navigations in the in the 16th century. Magellan’s fleet, which set sail from the port of Seville in 1519, comprised ships big enough to carry men and provisions in huge holds, which made possible the transportation of precious spices.

Elevation from midship section to bow

Elevation from midship section to stern 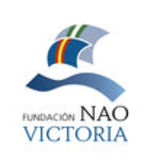