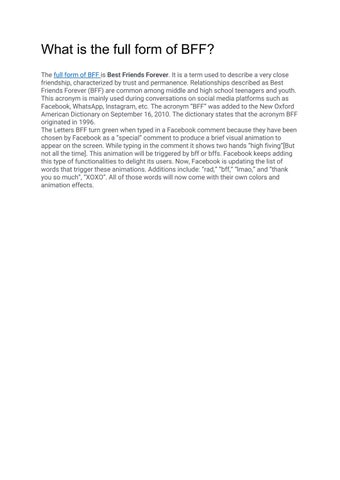 What is the full form of BFF? The full form of BFF is Best Friends Forever. It is a term used to describe a very close friendship, characterized by trust and permanence. Relationships described as Best Friends Forever (BFF) are common among middle and high school teenagers and youth. This acronym is mainly used during conversations on social media platforms such as Facebook, WhatsApp, Instagram, etc. The acronym “BFF” was added to the New Oxford American Dictionary on September 16, 2010. The dictionary states that the acronym BFF originated in 1996. The Letters BFF turn green when typed in a Facebook comment because they have been chosen by Facebook as a “special” comment to produce a brief visual animation to appear on the screen. While typing in the comment it shows two hands “high fiving”[But not all the time]. This animation will be triggered by bff or bffs. Facebook keeps adding this type of functionalities to delight its users. Now, Facebook is updating the list of words that trigger these animations. Additions include: “rad,” “bff,” “lmao,” and “thank you so much”, “XOXO”. All of those words will now come with their own colors and animation effects.