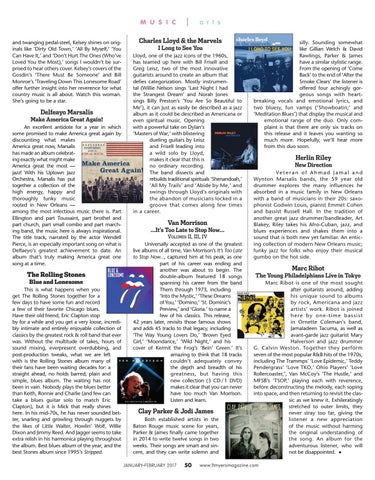 M U S I C and twanging pedal-steel, Kelsey shines on originals like ‘Dirty Old Town,’ ‘All By Myself,’ ‘You Can Have It,’ and ‘Don’t Hurt The Ones (Who’ve Loved You the Most),’ songs I wouldn’t be surprised to hear others cover. Kelsey’s covers of the Gosdin’s ‘There Must Be Someone’ and Bill Monroe’s ‘Traveling Down This Lonesome Road’ offer further insight into her reverence for what country music is all about. Watch this woman. She’s going to be a star.

Delfeayo Marsalis Make America Great Again! An excellent antidote for a year in which some promised to make America great again by discounting what makes America great now, Marsalis has made an album celebrating exactly what might make America great the most — jazz! With his Uptown Jazz Orchestra, Marsalis has put together a collection of the high energy, happy and thoroughly funky music rooted in New Orleans — among the most infectious music there is. Part Ellington and part Toussaint, part brothel and part church, part small combo and part marching band, the music here is always inspirational. The title track, narrated by the actor Wendell Pierce, is an especially important song on what is Delfaeyo’s greatest achievement to date. An album that’s truly making America great one song at a time.

The Rolling Stones Blue and Lonesome This is what happens when you get The Rolling Stones together for a few days to have some fun and record a few of their favorite Chicago blues. Have their old friend, Eric Clapton stop by for a while and you get a very loose, incredibly intimate and entirely enjoyable collection of classics by the greatest rock &amp; roll band that ever was. Without the multitude of takes, hours of sound mixing, everpresent overdubbing, and post-production tweaks, what we are left with is the Rolling Stones album many of their fans have been waiting decades for: a straight ahead, no holds barred, plain and simple, blues album. The waiting has not been in vain. Nobody plays the blues better than Keith, Ronnie and Charlie (and few can take a blues guitar solo to match Eric Clapton), but it is Mick that really shines here. In his mid-70s, he has never sounded better, snarling and growling through nuggets by the likes of Little Walter, Howlin’ Wolf, Willie Dixon and Jimmy Reed. And Jagger seems to take extra relish in his harmonica playing throughout the album. Best blues album of the year, and the best Stones album since 1995’s Stripped.

Charles Lloyd &amp; the Marvels I Long to See You Lloyd, one of the jazz icons of the 1960s, has teamed up here with Bill Frisell and Greg Leisz, two of the most innovative guitarists around to create an album that defies categorization. Mostly instrumental (Willie Nelson sings ‘Last Night I had the Strangest Dream’ and Norah Jones sings Billy Preston’s ‘You Are So Beautiful to Me’), it can just as easily be described as a jazz album as it could be described as Americana or even spiritual music. Opening with a powerful take on Dylan’s ‘Masters of War,’ with blistering dueling guitars by Leisz and Frisell leading into a wild solo by Lloyd, makes it clear that this is no ordinary recording. The band dissects and rebuilds traditional spirituals ‘Shenandoah,’ ‘All My Trails’ and ‘Abide by Me,’ and swings through Lloyd’s originals with the abandon of musicians locked in a groove that comes along few times in a career.

Van Morrison ...It’s Too Late to Stop Now... VOLUMES II, III, IV Universally accepted as one of the greatest live albums of all time, Van Morrison’s It’s Too Late to Stop Now..., captured him at his peak, as one part of his career was ending and another was about to begin. The double-album featured 18 songs spanning his career from the band Them through 1973, including ‘Into the Mystic,’ ‘These Dreams of You,’ ‘Domino,’ ‘St. Dominic’s Preview,’ and ‘Gloria.’ to name a few of his classics. This release, 42 years later, revisits those famous shows and adds 45 tracks to that legacy, including ‘The Way Young Lovers Do,’ ‘Brown Eyed Girl,’ ‘Moondance,’ ‘Wild Night,’ and his cover of Kermit the Frog’s ‘Bein’ Green.’ It’s amazing to think that 18 tracks couldn’t adequately convey the depth and breadth of his greatness, but having this new collection (3 CD / 1 DVD) makes it clear that you can never have too much Van Morrison. Listen and learn.

Clay Parker &amp; Jodi James Both established artists in the Baton Rouge music scene for years, Parker &amp; James finally came together in 2014 to write twelve songs in two weeks. Their songs are smart and sincere, and they can write solemn and JANUARY-FEBRUARY 2017

silly. Sounding somewhat like Gillian Welch &amp; David Rawlings, Parker &amp; James have a similar stylistic range. From the opening of ‘Come Back’ to the end of ‘After the Smoke Clears’ the listener is offered four achingly gorgeous songs with heartbreaking vocals and emotional lyrics, and two bluesy, fun vamps (‘Showboatin;’ and ‘Meditation Blues’) that display the musical and emotional range of the duo. Only complaint is that there are only six tracks on this release and it leaves you wanting so much more. Hopefully, we’ll hear more from this duo soon.

Herlin Riley New Direction Ve t e r a n o f A h m a d J a m a l a n d Wynton Marsalis bands, the 59 year old drummer explores the many influences he absorbed in a music family in New Orleans with a band of musicians in their 20s: saxophonist Godwin Louis, pianist Emmet Cohen and bassist Russell Hall. In the tradition of another great jazz drummer/bandleader, Art Blakey, Riley takes his Afro-Cuban, jazz, and blues experiences and shakes them into a sound that is both new yet familiar. An enticing collection of modern New Orleans music; funky jazz for folks who enjoy their musical gumbo on the hot side.

Marc Ribot The Young Philadelphians Live in Tokyo Marc Ribot is one of the most sought after guitarists around, adding his unique sound to albums by rock, Americana and jazz artists’ work. Ribot is joined here by one-time bassist in Ornette Coleman’s band, Jamaladeen Tacuma, as well as avant-garde jazz guitarist Mary Halverson and jazz drummer G. Calvin Weston. Together they perform seven of the most popular R&amp;B hits of the 1970s, including The Trammps’ ‘Love Epidemic,’ Teddy Pendergrass’ ‘Love TKO,’ Ohio Players’ ‘Love Rollercoaster,’, Van McCoy’s ‘The Hustle,’ and MFSB’s ‘TSOP,’ playing each with reverence, before deconstructing the melody, each soping into space, and then returning to revisit the classic as we knew it. Exhileratingly stretched to outer limits, they never stray too far, giving the listener a new appreciation of the music without harming the original understanding of the song. An album for the adventurous listener, who will not be disappointed. •