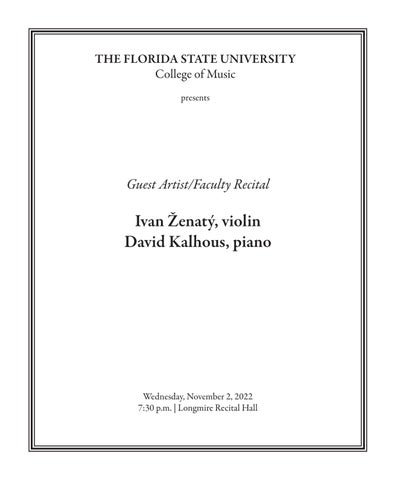 To Ensure An Enjoyable Concert Experience For All… Please refrain from talking, entering, or exiting during performances. Food and drink are prohibited in all concert halls. Recording or broadcasting of the concert by any means, including the use of digital cameras, cell phones, or other devices is expressly forbidden. Please deactivate all portable electronic devices including watches, cell phones, pagers, hand-held gaming devices or other electronic equipment that may distract the audience or performers. Recording Notice: This performance may be recorded. Please note that members of the audience may at times be included in this process. By attending this performance you consent to have your image or likeness appear in any live or recorded video or other transmission or reproduction made in conjunction to the performance. Health Reminder: The Florida Board of Governors and Florida State University expect masks to be worn by all individuals in all FSU facilities. Florida State University provides accommodations for persons with disabilities. Please notify the College of Music at (850) 644-3424 at least five working days prior to a musical event to request accommodation for disability or alternative program format.

PROGRAM Sonata in A Major for piano and violin, KV 305 I. Allegro II. Andante grazioso

Z domoviny (From the Homeland), two duets for violin and piano I. Moderato II. Andantino

ABOUT THE ARTISTS Ivan Ženatý reaches a broad public without abandoning the world of classical music for even a moment. Besides the technical perfection one would expect, he is also appreciated for his taste, style and a captivatingly beautiful tone. With his exceptional wealth of repertoire including more than 50 violin concertos, he is a favored guest artist with many international orchestras. Known for his versatility, his engagements also include solo recitals and chamber music collaborations. The springboard to his international career came as a result of being a prize winner in the Tchaikovsky International Violin Competition followed immediately by debut engagements with the Moscow and Czech Philharmonic. Other successes include First Prize at the Prague Spring Competition, as well as being a chosen laureate of the UNESCO International Rostrum of Young Performers. In the subsequent years following his victories, Mr. Zenaty made his orchestral and solo debuts in London, Berlin, Amsterdam, Vienna, Zurich, Tokyo, New York, Buenos Aires, Madrid and Jerusalem. The musicianship of Ženatý has been influenced the most by his personal encounters with Nathan Milstein, Ruggiero Ricci and André Gertler. Studies at the Tchaikovsky Conservatory in Moscow under the tutelage of Igor Bezrodny, had the greatest impact on his technical approach to the violin.

The great Czech musical tradition was passed on to Ženatý through his mentor Josef Suk, which resulted in many subsequent years of professional partnership and culminated in a recording of the complete works of W. A. Mozart. Other collaborations include great artists such as Yehudi Menuhin, Yo-Yo Ma, Serge Baudo, Valery Gergiev and Neville Marriner. Ženatý’s recordings have always aroused the enthusiastic acclaim of listeners and music critics. His prolific output of over 40 CDs includes the complete works of Telemann, Bach, Mendelssohn, Schumann, Schulhoff, Dvořák, and Grieg. His new recording of the complete works of Dvořák has attracted extraordinary attention, as has his recording of both violin concertos by J. B. Foerster with the BBC Symphony Orchestra London and its music director Jiri Belohlavek. A natural counterbalance to Ženatý’s concert and recording activities is his work as an acclaimed teacher. Ženatý has taught at the Cleveland Institute of Music, at the Royal Academy of Music in Copenhagen and in the Fall of 2019 was invited to join the faculty of the Hochschule fur Musik in Dresden. Summer activities will include teaching at the Meadowmount School of Music. Thanks to the Harmony Foundation of New York, Ivan Ženatý plays a rare Giuseppe Guarneri del Gesu violin made in 1740.

Pianist David Kalhous has gained recognition and critical acclaim in the United States and Europe for his wideranging repertoire and adventurous programming spanning more than three centuries. He has appeared as a soloist with Prague Symphony Orchestra FOK, Prague Philharmonia, Israel Symphony Orchestra, Moravian Philharmonic, and Chamber Philharmonia Pardubice. As a recitalist and a chamber musician, he performed at the Prague Spring Festival, Gilmore Keyboard Festival, Czech Philharmonic Chamber Music Series, Czech Radio’s Studio Live Rising Stars Series. In New York City, he appears at Bargemusic, Symphony Center, and Spectrum; in Chicago, at PianoForte Foundation and Constellation. Kalhous regularly performs, lectures, and teaches masterclasses at leading universities and conservatories around the world. Kalhous’s interest in new music has resulted in collaboration with many composers who have dedicated works to him. He has performed with Fonema Consort in Chicago and Konvergence Ensemble in Prague. Kalhous has appeared on Czech Radio and Television, on WFMT Chicago, and has written, produced, and hosted programs devoted to piano music for Prague’s Classic FM Radio. His recordings of can be heard on the Neos and ArcoDiva labels. Kalhous holds a doctorate from Northwestern University, where he studied with Urusla Oppens. His formal studies began at the Prague Conservatory with Jaroslav Čermák. He subsequently attended Hochschule für Musik in Vienna, Rubin Academy of Music at Tel-Aviv University, and Yale University, and studied with Paul Badura Skoda, Emil Leichner, Victor Derevianko, David Northington, and Peter Frankl. He also worked with Jerome Lowenthal at the Music Academy of the West. Kalhous is an Associate Professor of Piano at Florida State University College of Music. 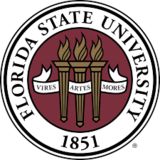