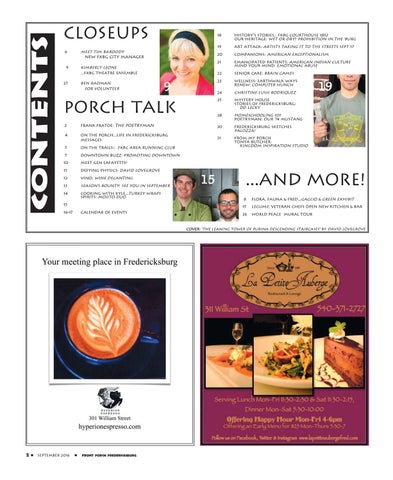 history’s stories.: fxbg courthouse 1852 our heritage: wet or dry? prohibition in the ‘burg

art attack: artists taking it to the streets sept 17

on the porch...life in fredericksburg Messages

season’s bounty: see you in september

Seven years ago in June of 2009, the first of Frank Fratoe’s poems filled a corner box in Front Porch Magazine with short, sentimental verse under the moniker The PoetryMan. Fratoe piqued Rob Grogan’s interest after sending him a manuscript of poems he had written about people and places around Fredericksburg, and eighty-six poems later he continues to delight and inspire readers with his column each month. Fratoe grew up in Cleveland, Ohio and earned his B.A. in philosophy from Ohio State University. He then studied sociology at the University of Pennsylvania, where he earned masters and doctoral degrees. While valuing his education, he adds, “My informal education has come from early jobs, college teaching, and a 25-year career with the federal government, but mostly from sharing other people’s company.” Fratoe met his wife Jane in New Jersey, and raised two sons with her while living in Springfield, Virginia and working at the Minority Business Development Agency, U.S. Department of Commerce in Washington, D.C. It was here that Fratoe

did much of this formal writing, compiling research reports focusing on issues related education, entrepreneurship, training and employment, several of which won him honors for his work. Of his poetry, however, Fratoe says Jane was his first inspiration. “I put together a manuscript of poems I wrote for her from the first time that we dated in 1975 until she passed away in 1998, and then some after her death as well. Every time there was a special occasion, an anniversary, a birthday, I wrote a poem. In the early days, I would write them on a card and mail them to her, but after we started to live with one another I’d pass them along to her. My early attempts at poetry were inspired by Jane and, in a way, they still are because my poems celebrate life, something she did very well every day we were together.” AfterJane’s death in 1998, and after his sons left home, Fratoe retired to Fredericksburg where he was inspired by its people and places. He says, “Fredericksburg got me back into writing poetry after retirement. I do a lot of walking, as there are so many beautiful

streets in this town and so many beautiful spots. There’s a spot over on Fall Hill Road where it meets River Road, and I will go over there and sit and look out over the river for quite some time. I’ve probably written about a dozen poems from that area alone.” Fratoe is inspired by poets in the vein of Whitman and Wordsworth, Oliver and Berry. He has written nearly 600 poems by hand, saying, “I can’t think very well in front of a keyboard or touchscreen, so I do it the old fashioned way. It flows out of you, comes right out of your mind, flows down through your fingers and onto the page.” He muses, “I hope handwriting is not a thing of the past.” Fratoe says he is grateful for the opportunity offered to him by Rob and Virginia Grogan to publish in Front Porch Magazine each month. Initially, he wished only for a place to share his poems with

his community, but he has been delighted with the outcome and response from the community over the years. He adds, “I love writing poetry. It’s so enjoyable, and it’s a lot of work to get a poem the right way, to say what you want it to say.” In Frank Fratoe’s case, that’s quite a lot. A.E. Bayne is a writer, visual artists, and educator living in Fredericksburg, Virginia. She publishes Fredericksburg Literary and Art Review in November and May each year. Photo by A.E.Bayne