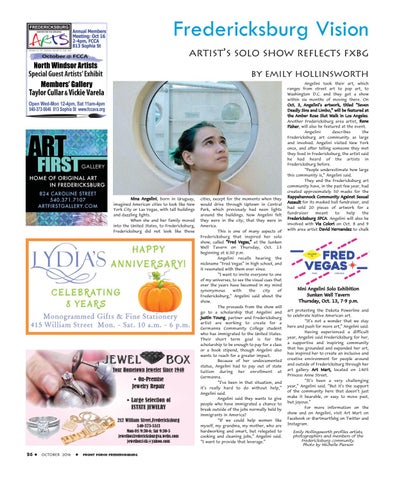 Nina Angelini, born in Uruguay, imagined American cities to look like New York City or Las Vegas, with tall buildings and dazzling lights. When she and her family moved into the United States, to Fredericksburg, Fredericksburg did not look like those

Your Hometown Jeweler Since 1940

cities, except for the moments when they would drive through Uptown in Central Park, which previously had neon lights around the buildings. Now Angelini felt they were in the city, that they were in America. This is one of many aspects of Fredericksburg that inspired her solo show, called “Fred Vegas,” at the Sunken Well Tavern on Thursday, Oct. 13 beginning at 6:30 p.m. Angelini recalls hearing the nickname “Fred Vegas” in high school, and it resonated with them ever since. “I want to invite everyone to one of my universes, to see the visual cues that over the years have becomed in my mind synonymous with the city of Fredericksburg,” Angelini said about the show. The proceeds from the show will go to a scholarship that Angelini and Justin Young, partner and Fredericksburg artist are working to create for a Germanna Community College student who has immigrated to the United States. Their short term goal is for the scholarship to be enough to pay for a class or a book stipend, though Angelini also wants to reach for a greater impact. Because of her undocumented status, Angelini had to pay out of state tuition during her enrollment at Germanna. “I’ve been in that situation, and it’s really hard to do without help,” Angelini said. Angelini said they wants to give people who have immigrated a chance to break outside of the jobs normally held by immigrants in America? “If we could help women like myself, my grandma, my mother, who are hardworking and smart, but relegated to cooking and cleaning jobs,” Angelini said. “I want to provide that leverage.”

Angelini took their art, which ranges from street art to pop art, to Washington D.C. and they got a show within six months of moving there. On Oct. 3, Angelini’s artwork, titled “Seven Deadly Sins and Limbo,” will be featured at the Amber Rose Slut Walk in Los Angeles. Another Fredericksburg area artist, Rene Fisher, will also be featured at the event. Angelini describes the Fredericksburg art community as large and involved. Angelini visited New York once, and after telling someone they met they lived in Fredericksburg, the artist said he had heard of the artists in Fredericksburg before. “People underestimate how large this community is,” Angelini said. They and the Fredericksburg art community have, in the past few year, had created approximately 50 masks for the Rappahannock Community Against Sexual Assault for its masked ball fundraiser, and had sold 20 pieces of artwork for a fundraiser meant to help the Fredericksburg SPCA. Angelini will also be involved with Via Colori on Oct. 8 and 9 with area artist David Hernandez to chalk

Nini Angelini Solo Exhibition Sunken Well Tavern Thursday, Oct. 13, 7-9 9 p.m. art protesting the Dakota Powerline and to celebrate Native American art. “It’s not a wonder that we stay here and push for more art,” Angelini said. Having experienced a difficult year, Angelini said Fredericksburg for her, a supportive and inspiring community that has grounded and expanded her art, has inspired her to create an inclusive and creative environment for people around and outside of Fredericksburg through her art gallery Art Mart, located on 1405 Princess Anne Street. “It’s been a very challenging year,” Angelini said. “But it’s the support of the community here that doesn’t just make it bearable, or easy to move past, but joyous.” For more information on the show and on Angelini, visit Art Mart on Facebook or @artmartfxbg on Twitter and Instagram. Emily Hollingsworth profiles artists, photographers and members of the Fredericksburg community. Photo by Michelle Pierson

A Prophetic Son of a Beach comes home

This month, we shine the spotlight on a “Favorite Son” of the city who has finally come home. Beach Music Hall of Fame member Steve Jarrell moved back to Fredericksburg this year after leaving in 1968 for the USAF and a long music career. We asked Steve to describe what it was like to grow up and play music in Fredericksburg during the 1960s, and also what is keeping him busy these days. Q. What was it like to be a teenager in Fredericksburg in the 1960s? We moved from North Carolina to scenic Riverside Drive when I was around 11 years old. Fredericksburg was a special place to grow up as a teenager in the 1960s. It was small town America, and those days seemed a lot like “Happy Days”. We’d cruise the circuit of the Hot Shoppes Restaurant, the R&S Snack Bar, and Eddie Mack’s Drive In where the waiters would hop onto the hood of your car and take your order as you drove into the parking lot. Then we’d head over to the drive in theater, back up our cars, and enjoy a show. We’d gather for “Dragnet” live music events hosted by Rev. and Mrs. Faulkner at the St. George’s Episcopal Church basement. Some lucky kids got jobs at the General Washington Inn where

by A.E. Bayne they enjoyed access to the pool in the summer. With neighbors Billy Kain, Robert Chinn, and Barry Sullivan, I’d wade across the river to Lauck’s Island and visit the house ruins over there. We’d wander up the river to the Embry Dam to swim and “do homework”. Forming bands was all the rage back when we were teenagers, and several of us musicians played all over town and Fairview Beach. Popular groups at that time were the Rebels (my first band), the Royals, the Exciters, the Infernos, the Rotations, and of course, the Prophets in our trademark togas. The Prophets become nationally known and provided the springboard for my music career, highlighted by a long stint with the Sons of the Beach. Q. Now that you have finally come full circle and moved back to Fredericksburg, what brought you back, and what are you up to? I came back to Fredericksburg because this is where I feel most at home. At my age, you appreciate more and more the value of a rock-solid support network of lifelong friends. I’m thankful that God has blessed me with the opportunity at this stage in life to return to residing alongside the scenic Rappahannock River and this city I so enjoyed as a teenager in the 60s. Now that I’m back, I still love playing and promoting the best music of my generation. You can find me playing with the Sons of the Beach at Shannon’s at Central Park on Wednesday nights, as well as other venues. I host the “Daddy O on the Patio” radio show from 10-2 PM MonFri on FredNetRadio, mybnr.com. I am working on plans to build the Virginia Music Hall of Fame right here in Fredericksburg to honor our famous Virginian musicians and inspire future generations. In my downtime, you might see me walking or biking loops around the River Heritage Trail/Canal Path where I meditate and recharge my batteries. It sure is good to be back home!

Album Release Party Karen Jonas / Country Songs Kenmore Inn Ballroom October 14, 2016, 8 p.m. $20.00 includes entry and CD Cash bar and merchandise available at the venue “We’d each like a Manhattan, and if you’d make it a little orangey? Up.” Tim Bray orders drinks at Kenmore Inn for Karen Jonas and himself that put a signature twist on a classic medley. The two have been experimenting with recipes in preparation for the release party of their highly anticipated sophomore album, Country Songs, just as they’ve often put a personal spin on classic country rhythms and lyrics during their time playing as a duo. Jonas and Bray have been such a fixture in Fredericksburg in recent years that they decided to keep it local while producing Country Songs and its accompanying music videos. Jonas says, “We wanted to make it a Fredericksburgcentric, local sound, so we recorded it at Wally Cleaver’s with Jeff Covert. It features a lot of Tim, and a little bit of Eddie Dickerson and Jay Starling, just a lot of Fredericksburg homegrown folks that we wanted to be a big part of this recording.” Jonas also hired local videographer Ryan Poe to shoot music videos for two songs off of Country Songs that show the versatility of Jonas’s and Bray’s talents. “Wasting Time” features Jonas at her emotive best, her voice a plaintive sigh among the oak barrels in the darkened warehouse of A. Smith Bowman Distillery. Alternately, Poe shot the title track “Country Songs” as a narrative that traverses the town of Fredericksburg, from the eclectic retail shop Hooked to the iconic train station to the oft frequented bar and music venues Colonial Tavern and the Kenmore Inn. The video also features many of the band’s family and friends. Though the wait has been longer than they anticipated for the release of Country Songs, Jonas says its been worth it. With their debut release, Bray says that the goal was to create something for family and friends to take away from their shows and enjoy. “Oklahoma Lottery picked up its own traction, which we were excited about but didn’t really expect,” Jonas says. “We’ve had Country Songs recorded since March of 2015, and

we wanted to have the time and space to do it the way you’re supposed to release an album, which meant a lot of front end work that we didn’t do with Oklahoma Lottery. We’re excited to do it the right way and really make a go of it. Plus, the press has been kind and we’ve received a lot of positive feedback.” While Jonas and Bray both acknowledge the pressure surrounding a second album, Bray says, “It’s art, so people might hate it.” Jonas elaborates, “If you send someone an album and they’ve never heard of you, they may not like it but that’s as far as it goes. If you send them a new album and they liked your last album, they’re going to tell people if they don’t like it. In the end it’s fine because I believe in what I’ve done, but it’s the risk that comes with a second album release.” Judging from the pre-release buzz in the press, Jonas and Bray have little to be anxious about with Country Songs. Country media website The Boot calls Jonas’s voice “smooth as a shot of bourbon,” and Saving Country Music calls the album "one of the most anticipated releases for the second half of 2016.” With the two years of touring that Jonas and Bray have been doing for Oklahoma Lottery, their latest collaboration is primed to push them even further in to the lime light. Next up for the group are more shows and a number of album release parties in New York, Philadelphia, Richmond, South Carolina, and the one right here at Kenmore Inn in Fredericksburg on Friday, October 14th. Buy your tickets today through Facebook at Karen Jonas Music, or on their website www.karenjonasmusic.com