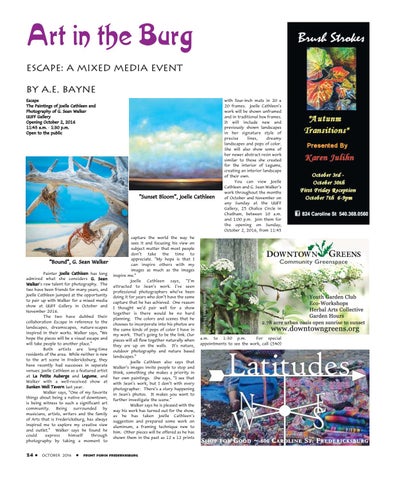 Art in the Burg

Art is a Gift from the Heart

“Bound”, G. Sean Walker Painter Joelle Cathleen has long admired what she considers G. Sean Walker’s raw talent for photography. The two have been friends for many years, and Joelle Cathleen jumped at the opportunity to pair up with Walker for a mixed media show at UUFF Gallery in October and November 2016. The two have dubbed their collaboration Escape in reference to the landscapes, dreamscapes, nature-scapes inspired in their works. Walker says, “We hope the pieces will be a visual escape and will take people to another place.” Both artists are long-time residents of the area. While neither is new to the art scene in Fredericksburg, they have recently had successes in separate venues: Joelle Cathleen as a featured artist at La Petite Auberge and Legume, and Walker with a well-received show at Sunken Well Tavern last year. Walker says, “One of my favorite things about being a native of downtown, is being witness to such a significant art community. Being surrounded by musicians, artists, writers and the family of Arts that is Fredericksburg, has always inspired me to explore my creative view and outlet.” Walker says he found he could express himself through photography by taking a moment to

Identify this mystery house and you could win a gift certificate from a downtown merchant.

capture the world the way he sees it and focusing his view on subject matter that most people don’t take the time to appreciate. “My hope is that I can inspire others with my images as much as the images inspire me.” Joelle Cathleen says, “I’m attracted to Sean’s work. I've seen professional photographers who’ve been doing it for years who don’t have the same capture that he has achieved. One reason I thought we’d pair well for a show together is there would be no hard planning. The colors and scenes that he chooses to incorporate into his photos are the same kinds of pops of color I have in my work. That’s going to be the link. Our pieces will all flow together naturally when they are up on the walls. It’s nature, outdoor photography and nature based landscapes.” Joelle Cathleen also says that Walker's images invite people to stop and think, something she makes a priority in her own paintings. She says, “I see that with Sean’s work, but I don’t with every photographer. There’s a story happening in Sean's photos. It makes you want to further investigate the scene.” Walker says he is pleased with the way his work has turned out for the show, as he has taken Joelle Cathleen’s suggestion and prepared some work on aluminum, a framing technique new to him. Other pieces will be offered as he has shown them in the past as 12 x 12 prints

with four-inch mats in 20 x 20 frames. Joelle Cathleen’s work will be shown unframed and in traditional box frames. It will include new and previously shown landscapes in her signature style of precise lines, dreamy landscapes and pops of color. She will also show some of her newer abstract resin work similar to those she created for the interior of Legume, creating an interior landscape of their own. You can view Joelle Cathleen and G. Sean Walker’s work throughout the months of October and November on any Sunday at the UUFF Gallery, 25 Chalice Circle in Chatham, between 10 a.m. and 1:00 p.m. Join them for the opening on Sunday, October 2, 2016, from 11:45

The poem below is a hint of the location of the mystery house. Good Luck!

My beautiful white face looks out on a scene not much changed by time. In the dim days of old, love abounded as my six young girls did frolic on my porches, Looking out on our honored veterans sleeping, horse and carriages creeping, But as the years flew by, my girls dwindled down to only two, white haired with changes aplenty, now gone with our love untouched. Oh joy,new laughter and young lives expected soon, new timbers and paint I can hardly wait, My porches will be filled like in the way back yonder, with happiness and prime-time partners.