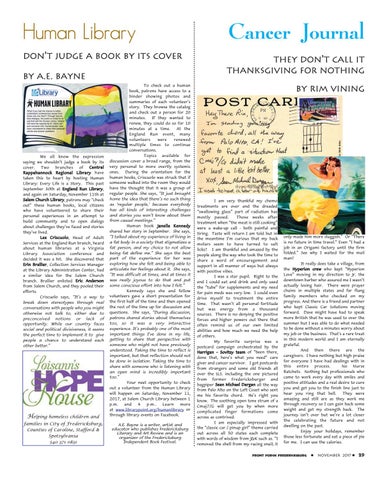 Roxy In the past few weeks the Fredericksburg SPCA has brought in dozens of homeless cats and dogs from the Virgin Islands, Houston, and South Carolina. Some of the animals are able to go up for adoption right away, but what about those who aren’t healthy enough or need some help with socialization? For this we have one of the best volunteer programs! It is our foster program. We give animals that don’t have families of their own time to heal physically and emotionally from whatever trauma they have suffered. There are of course other reasons why animals go into foster

me the most was a very shy dog name Watson. He was abandoned and lived in the woods for a long time, so when he was brought to the shelter he was terrified. I got a call from Sarah Chiles and I agreed to give Watson a place to stay for a couple of weeks. Getting him to my apartment was the hard part because it took two hours to get him out of his kennel at the shelter. When I finally got him into the car and then into my apartment, he hid in the closet for almost two days! Poor Watson was so fearful of everything, but with love and patience he started to come out of his shell. After two weeks, he turned into the happiest, sweetest dog I knew! Now he is living with a great family and adores his three year-old little “sister”, his owner’s little girl.

Tigger It is stories like Watson’s that help me to remember what a difference one person can make by opening their home temporarily for a homeless animal in need. Most of the dogs and cats that go into foster care just need a little love and kindness to heal. If this sounds like a job for you, give us a call! We are always looking for volunteer foster families!

don’t judge a book by its cover By A.E. Bayne Better value, more love for your pet than if you kennel board him!

We all know the expression saying we shouldn’t judge a book by its Central cover. Two branches of Rappahannock Regional Library have taken this to heart by hosting Human Library: Every Life is a Story. This past September 30th at England Run Library, and again on Saturday, November 11th at Salem Church Library, patrons may “check out” these human books, local citizens who have volunteered to share their personal experiences in an attempt to build community and to open dialogs about challenges they’ve faced and stories they’ve lived. Lee Criscuolo, Head of Adult Services at the England Run branch, heard about human libraries at a Virginia Library Association conference and decided it was a hit. She discovered that Erin Brallier, Collection Services Manager at the Library Administration Center, had a similar idea for the Salem Church branch. Brallier enlisted Eric Anderson from Salem Church, and they pooled their efforts. Criscuolo says, “It’s a way to break down stereotypes through real conversations with people who you might otherwise not talk to, either due to preconceived notions or lack of opportunity. While our country faces social and political divisiveness, it seems the perfect time to implement it to give people a chance to understand each other better.”

Jules care. If kittens or puppies are underweight, too young, or if an animal has been in the shelter for an extended period of time, our incredible foster coordinator, Sarah Chiles, finds them a foster family until they are ready to be adopted. Not only does the foster program save many animals and free up space in the shelter, but it is also a great experience for the foster families. I personally have fostered many dogs and cats, but one that stuck out to

Candi Armstrong, MSW is the Community Outreach and Volunteer Coordinator, at Fredericksburg Regional SPCA. She can be reached at : 540-8981500 x17

To check out a human book, patrons have access to a binder showing photos and summaries of each volunteer’s story. They browse the catalog and check out a person for 20 minutes. If they wanted to renew, they could do so for 10 minutes at a time. At the England Run event, many volunteers were renewed multiple times to continue conversations. Topics available for discussion cover a broad range, from the very personal to more overtly systemic ones. During the orientation for the human books, Criscuolo was struck that if someone walked into the room they would have the thought that it was a group of regular people. She says, “It just brought home the idea that there’s no such thing as ‘regular people,’ because everybody has all kinds of interesting challenges and stories you won’t know about them from casual meetings.” Human book Janelle Kennedy shared her story in September. She says, “I talked about my experience of living in a fat body in a society that stigmatizes a fat person, and my choice to not allow being fat define me.” She says the best part of the experience for her was exploring how she felt and being able to articulate her feelings about it. She says, “It was difficult at times, and at times it was really joyous to do that and put some conscious effort into how I felt.” Kennedy says she and fellow volunteers gave a short presentation for the first half of the time and then opened the rest of the time up for discussion and questions. She says, “During discussion, patrons shared stories about themselves too, so it was a very interactive experience. It’s probably one of the most important things I’ve done in my life, getting to share that perspective with someone who might not have previously understood. Taking the time to reflect is important, but that reflection should not be done in isolation. Taking the time to share with someone who is listening with an open mind is incredibly important too.” Your next opportunity to check out a volunteer from the Human Library will happen on Saturday, November 11, 2017, at Salem Church Library between 1 p.m. and 4 p.m.. Learn more at www.librarypoint.org/humanlibrary or through library events on Facebook. A.E. Bayne is a writer, artist and educator who publishes Fredericksburg Literary and Art Review and is an organizer of the Fredericksburg Independent Book Festival.

I am very thankful my chemo treatments are over and the dreaded “swallowing glass” part of radiation has mostly passed. Those weeks after treatment when “the meat is still cooking” were a wake-up call - both painful and tiring. Taste will return I am told but in the meantime I’m curious that my back molars seem to have turned to salt licks? I am thankful and amazed by the people along the way who took the time to share a word of encouragement and support in all manner of ways but always with positive vibes. I was a star pupil. Right to the end I could eat and drink and only used the “tube” for supplements and my need for pain meds was very low. I could even drive myself to treatment the entire time. That wasn’t all personal fortitude but was energy from a thousand sources. There is no denying the positive forces and higher powers out there that often remind us of our own limited abilities and how much we need the help of others. My favorite surprise was a postcard campaign orchestrated by the Harrigan – Sovitsy team of “been there, done that, here’s what you need” care giver and cancer survivor. I got postcards from strangers and some old friends all over the U.S. including the one pictured from former Fredericksburger and bagpiper Sean Michael Dargan all the way from Palo Alto on the Left Coast who sent me his favorite chord. He’s right you know. The soothing open tone strum of a Cmaj7/G will get you by when more complicated finger formations come across as contrived. I am especially impressed with the “classic car / pinup girl” theme carried out across all 50 states each complete with words of wisdom from J&K such as. “I removed the shell from my racing snail; it

only made him more sluggish.” Or “There is no future in time travel.” Even “I had a job in an Origami factory until the firm folded.” See why I waited for the mail man? It really does take a village, from the Hyperion crew who kept “Hyperion Love” moving in my direction to Jr. the downtown barber who assured me I wasn’t actually losing hair. There were prayer chains in multiple states and far flung family members who checked on my progress. And there is a friend and partner who kept Classic Car Solutions moving forward. Dave might have had to speak more British that he was used to over the summer but I was able to do what needed to be done without a minutes worry about my job or the business. That’s a rare treat in this modern world and I am eternally grateful. And then there are the caregivers. I have nothing but high praise for everyone I have had dealings with in this entire process. No Nurse Ratchets. Nothing but professionals who came to work every day with smiles and positive attitudes and a real desire to cure you and get you to the finish line just to hear you ring that bell. They were amazing and still are as they work me through recovery so I can gain back some weight and get my strength back. The journey isn’t over but we’re a lot closer the celebrating the future and not dwelling on the past. Enjoy your holidays, remember those less fortunate and eat a piece of pie for me. I can use the calories.