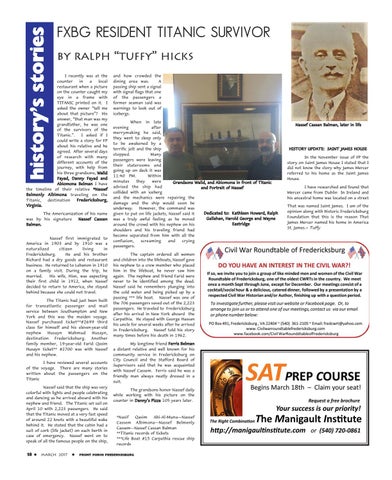 I recently was at the counter in a local restaurant when a picture on the counter caught my eye in a frame with TITANIC printed on it. I asked the owner “tell me about that picture”? His answer, “that man was my grandfather, he was one of the survivors of the Titanic.”. I asked if I could write a story for FP about his relative and he agreed. After several days of research with many different accounts of the journey, with help from his three grandsons, Walid Fayad, Danny Fayad and Abiomona Belman I have the timeline of their relative *Nassef Belmenly Albimona traveling on the Fredericksburg, Titanic, destination Virginia.

The Americanization of his name Nassef Cassan was by his signature Balman. Nassef first immigrated to America in 1903 and by 1910 was a naturalized citizen living in Fredericksburg. He and his brother Richard had a dry goods and restaurant business. He returned to Lebanon in 1910 on a family visit. During the trip, he married. His wife, Hisn, was expecting their first child in 1912, when Nassef decided to return to America, she stayed behind because she could not travel. The Titanic had just been built for transatlantic passenger and mail service between Southampton and New York and this was the maiden voyage. Nassef purchased ticket**#2699 third class for himself and his eleven-year-old nephew Husayn Mahmud Husayn, destination Fredericksburg. Another family member, 19-year-old Farid Qasim Husayn ticket** #2700 was with Nassef and his nephew. I have reviewed several accounts of the voyage. There are many stories written about the passengers on the Titanic Nassef said that the ship was very colorful with lights and people celebrating and dancing as he arrived aboard with his nephew and friend. The Titanic set sail on April 10 with 2,223 passengers. He said that the Titanic moved at a very fast speed of around 22 knots with a beautiful wake behind it. He stated that the cabin had a suit of cork (life jacket) on each berth in case of emergency. Nassef went on to speak of all the famous people on the ship,

When in late evening after merrymaking he said, they went to sleep only to be awakened by a terrific jolt and the ship stopped. Many passengers were leaving their staterooms and going up on deck it was 11:40 PM. Within minutes they were Grandsons Walid, and Abiomona in front of Titanic advised the ship had and Portrait of Nassef collided with an iceberg and the mechanics were repairing the damage and the ship would soon be underway. However, the command was Dedicated to: Kathleen Howard, Ralph given to put on life jackets, Nassef said it Gallahan, Harold George and Wayne was a truly awful feeling as he moved Eastridge around the crowd with his nephew on his shoulders and his traveling friend had become separated from him with all the confusion, screaming and crying passengers.

and how crowded the dining area was. A passing ship sent a signal with signal flags that one of the passengers a former seaman said was warnings to look out of icebergs. Nassef Cassan Balman, later in life

HISTORY UPDATE: SAINT JAMES HOUSE In the November issue of FP the story on Saint James House I stated that I did not know the story why James Mercer referred to his home as the Saint James House. I have researched and found that Mercer came from Dublin In Ireland and his ancestral home was located on a street That was named Saint James. I am of the opinion along with Historic Fredericksburg Foundation that this is the reason That James Mercer named his home in America St. James.~ Tuffy

Friends of Wilderness Battlefield (FoWB) is seeking new volunteers to staff positions at Ellwood Manor for the 2017 Season. FoWB volunteers form a dynamic team of dedicated individuals who share multiple common interests. We still have several openings available and would love to have you join us this year. At Ellwood Manor, the only Civil War-era structure remaining on the Wilderness Battlefield, volunteers may choose to become an interpreter, providing guided tours in the house, or to become a member of the Ground Force, maintaining the beautiful grounds surrounding the manor. We are also seeking volunteers interested in assisting with various projects on the battlefield, community outreach events and historical research. FoWB, in conjunction with the National Park Service, will provide a training session for new volunteers who are interested in becoming interpreters. Both new and returning guides need to attend either of the two training sessions offered on Thursday, March 9, or

By kiernan ziletti Saturday, March 18. Lunch and snacks will be provided for all sessions. Please contact Bob Lookabill at ellwood@fowb.org or (540) 972-5668 to indicate interest or with any questions regarding the training. For volunteers interested in joining the Ground Force, contact Mark Wakeman at Battlefield@fowb.org for information. Friends of Wilderness Battlefield is a nonprofit, all-volunteer organization devoted to helping preserve and interpret the Wilderness battlefield in Orange and Spotsylvania counties. Ellwood Manor is owned by the National Park Service. Friends of Wilderness Battlefield is pleased to steward the property in partnership with the?Fredericksburg and Spotsylvania National Military Park.?For more information or directions, please visit us at www.fowb.org.

The captain ordered all women and children into the lifeboats, Nassef gave his nephew to a crew member who placed him in the lifeboat, he never saw him again. The nephew and friend Farid were never to be identified among the dead. Nassef said he remembers plunging into the cold water and being picked up by a passing *** life boat. Nassef was one of the 706 passengers saved out of the 2,223 passengers. He traveled to Fredericksburg after his arrival in New York aboard the Carpathia. He stayed with George Hassan his uncle for several weeks after he arrived in Fredericksburg. Nassef told his story many times before his death in 1962. My longtime friend Ferris Belman a distant relative and well known for his community service in Fredericksburg on City Council and the Stafford Board of Supervisors said that he was acquainted with Nassef Cassem. Ferris said he was a friendly man always neatly dressed in a suit.

The grandsons honor Nassef daily while working with his picture on the counter in Danny’s Pizza 105 years later.

Fredericksburg has always been very concerned with the preservation of its historic buildings. Despite the advancement of technologies and changing building aesthetics, Fredericksburg has continued to protect its historic buildings. It is important we continue to cultivate the abundance of history present in the area. You now have an opportunity to help with this. On Sophia Street, in downtown Fredericksburg, there rests a house built in the 1890s. This building is a classic example of a working-class family home. It was built in 1894 by Gilbert C. Walker, an ironworker with a midsize family. The house is described by Kate Schwartz, Historic Resources Planner for the City of Fredericksburg, as follows: This two-story, wood-framed dwelling is clad in weatherboard siding and displays elements of the Colonial Revival and Craftsman styles in its simple form, open eaves, and full-width front porch. Topped by a hipped roof clad in asphalt shingles, the structure rests on a stretcher-bond brick foundation. A hipped roof also covers the projecting front porch and is supported by brick piers topped with battered wood posts. A simple picket balustrade surrounds the front porch. A 1984 photograph shows that the rafter tails were previously exposed under the porch and roof eaves, but have since been boxed in with simple framing. The front porch was added between 1927 and 1947, and a building permit indicates that an addition of “four frame rooms” was added to the rear of the house in 1953. 1210 Sophia Street is the last standing building from its time period on this block. The historic value that this home adds to Fredericksburg is being threatened. Currently, plans are to demolish the working-class structure to expand the library’s parking lot and in the future, provide space for an addition to the library building itself. It would be unfortunate to lose another contributing structure in our historic district. To help save the building, the City of Fredericksburg is offering $20,000 from the City’s Blight Abatement Fund (created in a partnership between the Historic Fredericksburg Foundation, Inc. and the City in 2012). These funds are offered to encourage and offset the costs of an investor relocating the building within the City of Fredericksburg.

This relocation would preferably be in the historic district but could be elsewhere in the city with the inclusion of overlay zoning to protect its historic fabric. It is important to keep the history of Fredericksburg alive—historic architecture such as the house on Sophia Street keeps the social fabric together through the built environment. By saving this structure, we would be protecting as well as teaching our city’s history. The success of this project would set a precedent for future buildings that could face destruction as the city continues to expand. Interested in obtaining 1210 Sophia Street and helping with the relocation? Contact Kate Schwartz in City Hall at 540-372-1179. Learn more about this building and the possible relocation at hffi.org/1210-sophia-street Kiernan Ziletti is a senior at the University of Mary Washington in the Historic Preservation Department and is currently completing an internship with the Historic Fredericksburg Foundation, Inc. After graduation Kiernan hopes to do hands-on work restoring historic buildings.