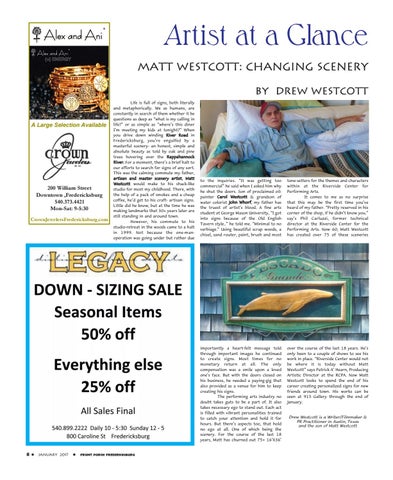 Life is full of signs, both literally and metaphorically. We as humans, are constantly in search of them whether it be questions as deep as “what is my calling in life?” or as simple as “where’s this diner I’m meeting my kids at tonight?” When you drive down winding River Road in Fredericksburg, you’re engulfed by a masterful scenery- an honest, simple and absolute beauty as told by oak and pine trees hovering over the Rappahannock River. For a moment, there’s a brief halt to our efforts to search for signs of any sort. This was the calming commute my father, artisan and master scenery artist, Matt Westcott would make to his shack-like studio for most my childhood. There, with the help of a pack of smokes and a cheap coffee, he’d get to his craft- artisan signs. Little did he know, but at the time he was making landmarks that 30+ years later are still standing in and around town. However, his commute to his studio-retreat in the woods came to a halt in 1999. Not because the one-manoperation was going under but rather due

to the inquiries. “It was getting too commercial” he said when I asked him why he shut the doors. Son of proclaimed oilpainter Carol Westcott & grandson of water colorist John Whorf, my father has the truest of artist’s blood. A fine arts student at George Mason University, “I got into signs because of the Old English Tavern style..” he told me. “Minimal to no verbiage.” Using beautiful scrap woods, a chisel, sand router, paint, brush and most

tone-setters for the themes and characters within at the Riverside Center for Performing Arts. It comes to me as no surprise that this may be the first time you’ve heard of my father. “Pretty reserved in his corner of the shop, if he didn’t know you.” say’s Phil Carluzzi, former technical director at the Riverside Center for the Performing Arts. Now 60, Matt Westcott has created over 75 of these sceneries

importantly a heart-felt message told through important images he continued to create signs. Most times for no monetary return at all. The only compensation was a smile upon a loved one’s face. But with the doors closed on his business, he needed a paying-gig that also provided as a venue for him to keep creating his signs. The performing arts industry no doubt takes guts to be a part of. It also takes necessary ego to stand out. Each act is filled with vibrant personalities trained to catch your attention and hold it for hours. But there’s aspects too, that hold no ego at all. One of which being the scenery. For the course of the last 18 years, Matt has churned out 75+ 16‘X36’

over the course of the last 18 years. He’s only been to a couple of shows to see his work in place. “Riverside Center would not be where it is today without Matt Westcott” says Patrick A’ Hearn, Producing Artistic Director at the RCPA. Now Matt Westcott looks to spend the end of his career creating personalized signs for new friends around town. His works can be seen at 915 Gallery through the end of January.

Drew Westcott is a Writer/Filmmaker & PR Practitioner in Austin, Texas and the son of Matt Westcott

“Heidi”, Cheryl Bosch It is common knowledge that area animal shelters often find themselves filled to the point where they have to turn some animals away, so outreach is crucial. Fredericksburg Regional SPCA’s director, Caitlin Daly, and local artist Jayme Bauguess have teamed up to pair ingenuity with creativity in the first ever SPCA Art Crawl. Join them and other area artists on Thursday, January 5, 2017, between 7 p.m. and 9 p.m., for an event designed to highlight some of the many affectionate companions wanting to be adopted at the facility. Light hors d’oeuvres, drinks and music will be on the schedule for the evening, and you might just find yourself leaving with a fourlegged friend. Bauguess is a self-proclaimed animal hoarder (in the best sense of the word). She says, “I was wondering what I could do with the skills that I have to help area animals since I’m now living in an apartment. Caitlin had been wanting to partner with artists for a while, so this was perfect timing.” Daly concurs, “I had been wanting to do something like things since I started as director here. I saw art hanging downtown at Sunken Well and I though we could do something like that here. When Jayme approached me, I knew it would work.” Bauguess networked with many local artists for this event. She invited them to visit the facility in early December to spend time getting to know a pawed friend or two, before returning home to create artwork to represent each animal. Nearly twenty artists signed. Now, when people come to adopt one of these lucky pups or pusses, they will also take home a masterpiece by a local artist. Cheryl Bosch, artist and owner of

Frame Design Gallery, says, “If a painting - something I love to do anyway - can help an animal find a home, then why wouldn’t I do this?” Other artists echo Bosch’s sentiment. Alexis Kay explains, “I love dogs so much, but because my allergies prohibit me from owning most breeds, I wanted to express that enthusiasm through art, to hopefully encourage people to take home a dog I can’t. I fell in love with Paco’s affectionate personality, so I know that he will make someone happy.” Joshua Luna chose a dog breed that typically has a hard time finding a home: a Pit Bull. He says, “There’s still a prevailing stigma against Pit Bulls / Staffordshire Terriers, and it’s a big reason why so many occupy shelters and struggle to get adopted. I chose Sparky because my goal is to show that these breeds are actually very loving animals and make wonderful companions, if people would only look past the underserved bad reputation.” In addition to these dog breeds, Daly notes that certain cats are hard to place. She says, “There are several black cats that have been with us for a long time. There’s one named Adams Morgan who has been here for nearly two years.” Daly has high hopes for her charges and sees this event as one where the public will look forward to visiting the shelter while enjoying an evening of art, food and music. She says donations are always welcome. “Our shelter runs 100% on community donations,” Daly explains. “Any event like this is not only to partner with our community in new ways, but also to spread awareness of what we do. Every day we save lives, sometimes up to 400 a day. Every donation matters and counts. We hope you come out and have a glass of wine, a good time, and support the cause.” SPCA ART CRAWL. Fredericksburg Regional SPCA at 10819 Courthouse Rd, FXBG, VA 22408 Thursday, January 5, 7-9 9pm Light hors d’oeuvres, drinks and music Art & Four-L Legged Adoptable Companions A.E. Bayne is a writer, artists and educator who published the Fredericksburg Literary and Art Review.