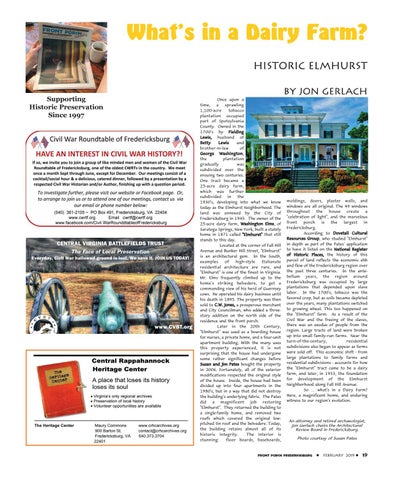 By jon gerlach Once upon a time, a sprawling 1,100-acre tobacco plantation occupied part of Spotsylvania County. Owned in the 1700's by Fielding Lewis, husband of Betty Lewis and brother-in-law of George Washington, the plantation gradually was subdivided over the ensuing two centuries. One tract became a 25-acre dairy farm, which was further subdivided in the 1930's, developing into what we know today as the Elmhurst Neighborhood. The land was annexed by the City of Fredericksburg in 1945. The owner of the 25-acre dairy farm, Washington Elms, of Saratoga Springs, New York, built a stately home in 1871 called "Elmhurst" that still stands to this day. Located at the corner of Fall Hill Avenue and Bunker Hill Street, "Elmhurst" is an architectural gem. In the South, examples of high-style Italianate residential architecture are rare, and "Elmhurst" is one of the finest in Virginia. Mr. Elms frequently climbed up to the home's striking belvedere, to get a commanding view of his herd of Guernsey cows. He operated his dairy business until his death in 1895. The property was then sold to C.W. Jones, a prosperous merchant and City Councilman, who added a threestory addition on the north side of the residence and the front porch. Later in the 20th Century, "Elmhurst" was used as a boarding house for nurses, a private home, and a four-unit apartment building. With the many uses this property experienced, it is not surprising that the house had undergone some rather significant changes before Susan and Jim Pates bought the property in 2006. Fortunately, all of the exterior modifications respected the original style of the house. Inside, the house had been divided up into four apartments in the 1980's, but in a way that did not destroy the building's underlying fabric. The Pates did a magnificent job restoring "Elmhurst". They returned the building to a single-family home, and removed two roofs which covered the original lowpitched tin roof and the belvedere. Today, the building retains almost all of its historic integrity. The interior is stunning: floor boards, baseboards,

moldings, doors, plaster walls, and windows are all original. The 49 windows throughout the house create a "celebration of light", and the marvelous front porch is the largest in Fredericksburg. According to Dovetail Cultural Resources Group, who studied "Elmhurst" in depth as part of the Pates' application to have it listed on the National Register of Historic Places, the history of this parcel of land reflects the economic ebb and flow of the Fredericksburg region over the past three centuries. In the antebellum years, the region around Fredericksburg was occupied by large plantations that depended upon slave labor. In the 1700's, tobacco was the favored crop, but as soils became depleted over the years, many plantations switched to growing wheat. This too happened on the "Elmhurst" farm. As a result of the Civil War and the freeing of the slaves, there was an exodus of people from the region. Large tracts of land were broken up into small family-run farms. Near the turn-of-the-century, residential subdivisions also began to appear as farms were sold off. This economic shift - from large plantations to family farms and residential subdivisions - accounts for how the "Elmhurst" tract came to be a dairy farm, and later, in 1933, the foundation for development of the Elmhurst Neighborhood along Fall Hill Avenue. So â&#x20AC;Ś what's in a Dairy Farm? Here, a magnificent home, and enduring witness to our region's evolution.

An attorney and retired archaeologist, Jon Gerlach chairs the Architectural Review Board in Fredericksburg. Photo courtesy of Susan Pates