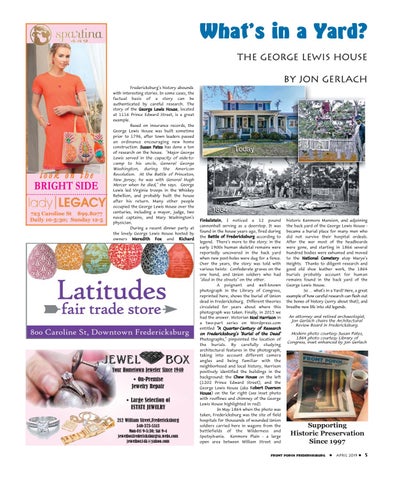 Fredericksburg's history abounds with interesting stories. In some cases, the factual basis of a story can be authenticated by careful research. The story of the George Lewis House, located at 1116 Prince Edward Street, is a great example. Based on insurance records, the George Lewis House was built sometime prior to 1796, after town leaders passed an ordinance encouraging new home construction. Susan Pates has done a ton of research on the house. "Major George Lewis served in the capacity of aide-tocamp to his uncle, General George Washington, during the American Revolution. At the Battle of Princeton, New Jersey, he was with General Hugh Mercer when he died," she says. George Lewis led Virginia troops in the Whiskey Rebellion, and probably built the house after his return. Many other people occupied the George Lewis House over the centuries, including a mayor, judge, two naval captains, and Mary Washington's physician. During a recent dinner party at the lovely George Lewis House hosted by owners Meredith Fox and Richard

Your Hometown Jeweler Since 1940

Finkelstein, I noticed a 12 pound cannonball serving as a doorstop. It was found in the house years ago, fired during the Battle of Fredericksburg according to legend. There's more to the story: in the early 1900s human skeletal remains were reportedly uncovered in the back yard when new post-holes were dug for a fence. Over the years, the story was told with various twists: Confederate graves on the one hand, and Union soldiers who had "died in the streets" on the other. A poignant and well-known photograph in the Library of Congress, reprinted here, shows the burial of Union dead in Fredericksburg. Different theories circulated for years about where this photograph was taken. Finally, in 2015 we had the answer. Historian Noel Harrison in a two-part series on Wordpress.com Century of Research entitled "A Quarter-C on Fredericksburg's 'Burial of the Dead' Photographs," pinpointed the location of the burials. By carefully studying architectural features in the photograph, taking into account different camera angles and being familiar with the neighborhood and local history, Harrison positively identified the buildings in the background: the Chew House on the left (1202 Prince Edward Street), and the George Lewis House (aka Robert Duerson House) on the far right (see inset photo with rooflines and chimney of the George Lewis House highlighted in red). In May 1864 when the photo was taken, Fredericksburg was the site of field hospitals for thousands of wounded Union soldiers carried here in wagons from the battlefields of the Wilderness and Spotsylvania. Kenmore Plain - a large open area between William Street and

historic Kenmore Mansion, and adjoining the back yard of the George Lewis House became a burial place for many men who did not survive their hospital ordeals. After the war most of the headboards were gone, and starting in 1866 several hundred bodies were exhumed and moved to the National Cemetery atop Marye's Heights. Thanks to diligent research and good old shoe leather work, the 1864 burials probably account for human remains found in the back yard of the George Lewis House. So â&#x20AC;Ś what's in a Yard? Here, a great example of how careful research can flesh out the bones of history (sorry about that), and breathe new life into old legends. An attorney and retired archaeologist, Jon Gerlach chairs the Architectural Review Board in Fredericksburg. Modern photo courtesy Susan Pates, 1864 photo courtesy Library of Congress, inset enhanced by Jon Gerlach