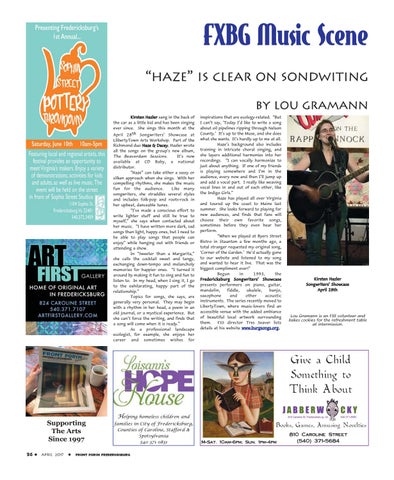 Sarah Lapp At the Crossroads of Color & Creativity By A.E. Bayne

By Lou Gramann Kirsten Hazler sang in the back of the car as a little kid and has been singing ever since. She sings this month at the April 28th Songwriters’ Showcase at LlibertyTown Arts Workshop. Part of the Richmond duo Haze & Dacey, Hazler wrote all the songs on the group’s new album, The Beaverdam Sessions. It’s now available at CD Baby, a national distributor. “Haze” can take either a sassy or silken approach when she sings. With her compelling rhythms, she makes the music fun for the audience. Like many songwriters, she straddles several styles and includes folk-pop and roots-rock in her upbeat, danceable tunes. “I’ve made a conscious effort to write lighter stuff and still be true to myself,” she says when contacted about her music. “I have written more dark, sad songs than light, happy ones, but I need to be able to play songs that people can enjoy” while hanging out with friends or attending a show. In “Sweeter than a Margarita,” she calls the cocktail sweet and tangy, exchanging down-tempo and melancholy memories for happier ones. “I turned it around by making it fun to sing and fun to listen to. In my head, when I sing it, I go to the exhilarating, happy part of the relationship.” Topics for songs, she says, are generally very personal. They may begin with a rhythm in her head, a poem in an old journal, or a mystical experience. But she can’t force the writing, and finds that a song will come when it is ready.” As a professional landscape ecologist, for example, she enjoys her career and sometimes wishes for

inspirations that are ecology-related. “But I can’t say, ‘Today I’d like to write a song about oil pipelines ripping through Nelson County.’ It’s up to the Muse, and she does what she wants. It’s hardly up to me at all. Haze’s background also includes training in intricate choral singing, and she layers additional harmonies into her recordings. “I can vocally harmonize to just about anything. If one of my friends is playing somewhere and I’m in the audience, every now and then I’ll jump up and add a vocal part. I really like weaving vocal lines in and out of each other, like the Indigo Girls.” Haze has played all over Virginia and toured up the coast to Maine last summer. She looks forward to playing for new audiences, and finds that fans will choose their own favorite songs, sometimes before they even hear her perform. “When we played at Byers Street Bistro in Staunton a few months ago, a total stranger requested my original song, ‘Corner of the Garden.’ He’d actually gone to our website and listened to my song and wanted to hear it live. That was the biggest compliment ever!” Begun in 1993, the Fredericksburg Songwriters’ Showcase presents performers on piano, guitar, mandolin, fiddle, ukulele, banjo, saxophone and other acoustic instruments. The series recently moved to LibertyTown, where music-lovers find an accessible venue with the added ambiance of beautiful local artwork surrounding them. FSS director Tres Seaver lists details at his website www.burgsongs.org.

Lapp is known for her expansive works, with standard size measuring 48” x 48”. She says, “It’s the size that works best for what I do. I find that when I work smaller I try to fit so much in that it obscures it. I also work strictly with a palette knife which doesn’t lend itself to small scale work.” Lapp says she takes her inspiration from abstract expressionism, but she has a hard time labeling her style. She says, “You could call it abstract and mixed media work, because there’s definitely different bodies in the work. There’s a body of work that’s strictly abstract oil paintings, and then there’s a body of work that has abstracted imagery worked in.” Kirsten Hazler Songwriters’ Showcase April 28th

Lou Gramann is an FSS volunteer and bakes cookies for the refreshment table at intermission.

Give a Child Something to Think About

Local artist Sarah Lapp has been painting seriously for about seven years, making a living by creating and selling large-scale abstract works from her studio at LibertyTown Arts Workshop.

“I like to be able to see the hand and movement of the body in a piece of work. I also like introducing these figures into this kind of abstracted color landscape. It has a sense of timelessness for me.”

With her mixed media, Lapp says she has a departure point, a frame of reference from some sort of imagery. She has mixed media pieces that she has thought about for years before creating them. She finds that revealing when it happens and it directs the mood of the piece upon which she is working.

Lapp doesn’t mind telling her audience what her pieces represent to her. While she knows her audience will bring their own experiences to them, she sees no harm in giving them a reference point through a title or caption. She says, “They say that art is a living thing and that’s what makes it such a great podium to connect with people in the first place. I think it’s interesting to talk about what pieces mean, and I’m not offended when people don’t see my meaning in one of my pieces. I don’t ever want people to think there’s something they need to 'get.' I feel that if you respond to a piece, that’s fantastic; if you don’t, then there’s nothing wrong with that."

Lapp’s description of her process of painting sounds like that of narrative writing. Each piece evolves around tone and mood, color and character. She agrees with the analogy, saying, “I actually had a show a few years back that I titledStories; there’s very much a story that goes with each piece. It’s a story that I know before I start creating the piece, but I don’t necessarily know which story is going to come out when I’m not working in mixed media. That’s part of the enjoyment.”

Most recently, Lapp has returned to school to pursue a Master of Fine Arts at Lesley University in Boston, Massachusetts, where she is completing a low residency program which allows her to remain in Fredericksburg for most of the semester. She says grad school has further delineated the bodies of her work into strictly abstract color field or abstract expressionist influenced work versus a body that is more raw and nonaesthetic, both of which she finds exciting and satisfying as an artist.

Lapp says she came to mixed media three years ago when she was having a hard time reaching the part of her brain that would work strictly abstractly or intuitively. Lapp says the process requires many layers. She layers under and leaves a grid. She paints under the images, but also over top of them to give them what she describes as a moody, haunting memory-like quality. She says,

Lapp's current work is on display at Sunken Well Tavern through April 13, 2017. A longer version of this piece was originally printed in the fall edition of the Fredericksburg Literary and Art Review (FLAR), a regional literary and art journal published biannually by A.E. Bayne. It is available atfredericksburgwriters.com .