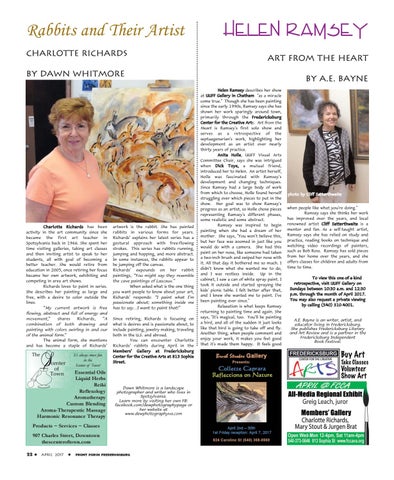 Rabbits and Their Artist Charlotte Richards

Art from the Heart

Charlotte Richards has been activity in the art community since she became the first art teacher in Spotsylvania back in 1966. She spent her time visiting galleries, taking art classes and then inviting artist to speak to her students, all with goal of becoming a better teacher. She would retire from education in 2005, once retiring her focus became her own artwork, exhibiting and competing in area art shows. Richards loves to paint in series. She describes her painting as large and free, with a desire to color outside the lines. “My current artwork is free flowing, abstract and full of energy and movement,” shares Richards, “A combination of both drawing and painting with colors swirling in and our of the animal form.” The animal form, she mentions and has become a staple of Richards’

It’s always more fun in the Scenter of Town!

artwork is the rabbit. She has painted rabbits in various forms for years. Richards’ explains her latest series has a gestural approach with free-flowing strokes. This series has rabbits running, jumping and hopping, and more abstract. In some instances, the rabbits appear to be jumping off the canvas. Richards’ expounds on her rabbit paintings, “You might say they resemble the cave paintings of Lascaux.” When asked what is the one thing you want people to know about your art, Richards’ responds: “I paint what I’m passionate about; something inside me has to say…I want to paint that!” Since retiring, Richards is focusing on what is desires and is passionate about, to include painting, jewelry making, traveling both in the U.S. and abroad. You can encounter Charlotte Richards’ rabbits during April in the Members’ Gallery at Fredericksburg Center for the Creative Arts at 813 Sophia Street.

By A.E. Bayne Helen Ramsey describes her show at UUFF Gallery in Chatham "as a miracle come true." Though she has been painting since the early 1990s, Ramsey says she has shown her work sparingly around town, primarily through the Fredericksburg Center for the Creative Arts. Art from the Heart is Ramsey's first solo show and serves as a retrospective of the septuagenarian's work, highlighting her development as an artist over nearly thirty years of practice. Anita Holle, UUFF Visual Arts Committee Chair, says she was intrigued when Dick Toye, a mutual friend, introduced her to Helen. An artist herself, Holle was fascinated with Ramsey's development and changing techniques. Since Ramsey had a large body of work from which to choose, Holle found herself struggling over which pieces to put in the show. Her goal was to show Ramsey's progress as an artist, so Holle chose pieces representing Ramsey's different phases, some realistic and some abstract. Ramsey was inspired to begin painting when she had a dream of her mother. She says, "You won't believe this, but her face was zoomed in just like you would do with a camera. She had this paint on her nose, like someone had taken a two-inch brush and swiped her nose with it. All that day it bothered me so much. I didn't know what she wanted me to do, and I was restless inside. Up in the cabinet, I saw a can of white spray paint. I took it outside and started spraying the kids' picnic table. I felt better after that, and I knew she wanted me to paint. I've been painting ever since." Relaxation is what keeps Ramsey returning to painting time and again. She says, "It's magical, too. You'll be painting a bird, and all of the sudden it just looks like that bird is going to take off and fly. Another thing, when people comment and enjoy your work, it makes you feel good that it's made them happy. It feels good

photo by Cliff Satterthwaite when people like what you're doing." Ramsey says she thinks her work has improved over the years, and local renowned artist Cliff Satterthwaite is a mentor and fan. As a self-taught artist, Ramsey says she has relied on study and practice, reading books on technique and watching video recordings of painters, such as Bob Ross. Ramsey has sold pieces from her home over the years, and she offers classes for children and adults from time to time.

Trista Chapman of Sophia Street Studios is pleased to announce the first annual Sophia Street Pottery Throwdown to be held on June 10th in the 1100 block of Sophia Street in downtown Fredericksburg, Virginia. Featuring local and regional artists working with clay, this festival provides an opportunity for the community to meet local potters, see demonstrations of a variety of techniques

as well as an opportunity for children and adults to get their hands dirty at the 'hands on' area. A wide variety of work will be for sale. Music will be provided by Larry Hinkle and Friends and a raffle will be held for a collaborative pot made by Dan Finnegan and decorated by Trista Chapman. Trista Chapman has been making her whimsical and uniquely colorful pottery (see above) in Fredericksburg since 1995 and is the founder of the annual Empty Bowls Fundraiser in aid of Empowerhouse.

Dan Finnegan in his studio deep in the woods beside his 2 chambered wood-ffired kiln For further information contact: Trista Chapman Sophia Street Studios 1104 Sophia Street Fredericksburg, Virginia 22401 540-2 208-2 2422 Dan Finnegan is a renowned potter of over 40 years. His work is included in numerous collections, museums and publications in the US and UK. At Left Teapot by Dan

Dawn Whitmore is a landscape photographer and writer who lives in Spotsylvania. Learn more by visiting her own FB: facebook.com/dewphotographypage or her website at www.dewphotographyva.com