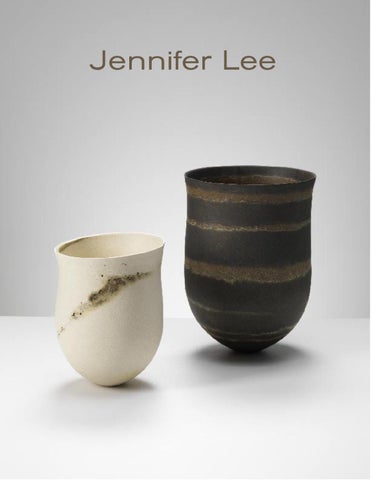 Jennifer Lee New Works Jennifer Lee’s pots evoke a poised and certain stillness. Created on an intimate scale, the impact of these objects is nonetheless substantial, their elegant presence ﬁlling the gallery with color and pure form.

created through an additive method. Her incorporation of oxides into the stoneware tells a story of formation, a coming together of elements to create singular works. Instead of erosion, there is steady accumulation, as her works acquire their dignity through the long process of their making.

Formed without glazing, the softly textured surface of the stoneware bodies that Jennifer Lee builds up and burnishes are striking. Referring to her unique pigments, Sir David Attenborough noted that “Because she does not use glaze, her subtle colours and misty shades come not from a veil draped over the pot but from within its very substance, as in the face of a cliff.”1 Lee uses a limited palette of hues that evoke the natural world, including olive, peat, moss, and slate blue. Like naturally burnished river rocks, her surfaces have a gently worn patina that suggests the passage of time. Rusted specks, traces, halos and bands seem to propose a reduction of the works to their essences. There is a sense of erosion, that the surfaces of her works could be the result of natural processes.

Beginning with a pinched base and rising up through the addition of larger bands of clay, every color, trace, and halo is incorporated into the body of the pot, and is therefore visible on the interior as well as the exterior. Her labor is arduous, carried out by hand, and in the words of Tanya Harrod, “conﬁrms what we always suspected, that there must be dark determination, toughness, and struggle to create works of such poised purity and perfection.”2 Lee’s vessels are imbued with the activity of their creation, resulting in ﬁnely balanced forms. The delicate feet of her works deftly generate a feeling of graceful suspension, as though the pieces have chosen to momentarily settle in their space. Although these bases may seem improbably small, they function effectively as her vessels’ center of gravity, the point of contact

between the work and the world. They are poised on the very edge of action and motion, remaining utterly still on their pedestals.

descriptions “are concerned with telling us about the very nature of the pot, with conveying the qualities which make it what it is, the qualities which are the essence of the vessel.”4 In this way, the titles announce that the ﬁnished pieces could never have been other than they are.

However, balance is not always synonymous with symmetry; it can instead indicate a harmonious deviation from classical forms. Carefully considered asymmetries can disturb the equilibrium of her vessels and add to their elegance. Tilted and leaning rims, swelling proﬁles and soft ridges are all possible variations on this theme. These irregularities echo how her pieces function within space, an important component of Lee’s work. Arranged on two oval pedestals, as they are in the main gallery, their curves create a compelling negative space in which they can exist and make their presence known. According to Edmund de Waal in his essay on the artist, “Some objects shrink in the world, or diminish their surroundings. Others, like Jennifer Lee’s, seem to add.”3

Jennifer Lee’s body of work, like the geological processes it conjures, has evolved slowly since she began working as a ceramic artist in the early 1980s, after completing her studies at the Edinburgh College of Art and the Royal College of Art in London. She has limited her explorations to bowl and vessel forms, but has found freedom within these self-imposed constraints. Through concentrated effort, Lee has made expansive the borders of her artistic production. This exhibition will be Jennifer Lee’s fourth solo show in Los Angeles. Lee has been regularly exhibiting work worldwide since 1981. In 2009, she was invited by Issey Miyake to participate in a three person show at 21_21 Design Sight, Tokyo. This show, entitled U-Tsu-Wa, was designed by acclaimed Japanese architect Tadao Ando.

Each of Lee’s works exists with a quiet selfconﬁdence. The works are given descriptive titles such as Dark olive, umber rings, or Pale, ﬂashing speckled trace, tilted. Ian Wilson has theorized that these seemingly straightforward

Lee’s work is internationally represented in major museum collections, including the Metropolitan Museum of Art, New York, the Philadelphia Museum of Art, the Los Angeles County Museum of Art, the Victoria & Albert Museum, London, and the Royal Scottish Museum, Edinburgh. Jennifer Lee was born in Aberdeenshire, Scotland, in 1956. She lives and works in London. —Kelly E. Boyd