Craig Kauffman: The Numbers Paintings from 1989 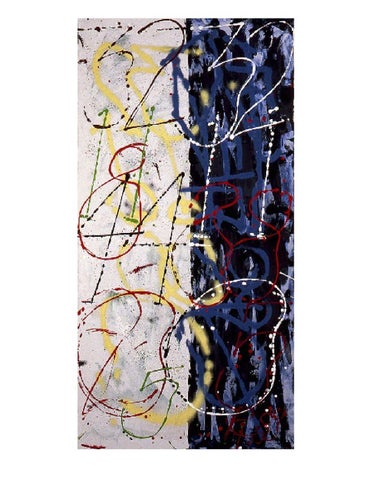 The Numbers Paintings from 1989

The Numbers Paintings from 1989 A rhythmic, wandering line has been present in Craig Kauffman’s paintings since the 1950s. Based in his experiments with skipping, dotted lines made with ink on paper, the line in those paintings displayed a loose, calligraphic hand that seems to deﬁne form, yet also describe a suspended space. In the Numbers paintings from 1989, Kauffman employed that line again to make numerals, boldly drawn in paint and hovering over a colored ground of imagery.

The large-scale paintings—some as tall as ten feet—were made following Kauffman’s ﬁrst move to the Philippines. A rich landscape and powerful native forms from his newfound home are interwoven with the layers of numbers. Images of volcanos, ethnic ﬁgurative sculpture (Santos) and architecture (Four Kubo) are included in the backgrounds of the works. With these allusions to elements from his new environment, as well as his use of the of the bifurcated canvas, Kauffman again made use of his broken, skipping line. As biographer Hunter Drohojowska-Philp has written, “Most are divided vertically, like Asian scrolls, and painted in two contrasting colors such as white and red. The outlines of orchids, volcanos or houses with pitched roofs are repeated like a fabric pattern while the thin, curling numbers are overlaid. The iconography is drawn from his exposure to Philippine culture.” 1

In the third exhibition to be drawn from the Estate of Craig Kauffman (1932-2010), the Frank Lloyd Gallery presents a series of paintings by Kauffman made in 1989. Kauffman’s interest in unorthodox application of paint and his love of the physicality of painting are accompanied by a brilliant color sense. Kauffman considered these works, which became known as the Numbers, to be a continuation of his use of calligraphic line, and an integration of sensuous color with architectural form. The paintings demonstrate a masterful range of painting’s language: dark versus light, the organic and architectural, and luminosity with density.

The vertical composition of the Numbers paintings can also be strongly associated with Asian calligraphy. This clear structure of marking from top to bottom, and the reference to the format of a scroll, belies the artist’s lifelong fascination with the arts of Japan, China and Southeast Asia. Indeed, his move to the Philippines provided him with easy access to Taiwan and Hong Kong, and his viewing of landscape paintings made with ink was made possible. “Japanese calligraphy is organized in columns and rows,” Belloli wrote, “and Japanese painting as one or several simple recognizable elements.” The format of the Numbers paintings not only recalls the inﬂuence of Asian painting, but also provides an expansive view of pictorial space, which Kauffman skillfully divides into a space for a speciﬁc purpose: a combination of linear and architectural form.

Kauffman retained the unusual line from his early drawings. In an essay for Craig Kauffman drawing retrospective in 2008, curator Jay Belloli wrote: In these linear works on paper, Kauffman began an approach to drawing that he has employed more and more frequently over the years. At the time, the top of a bottle of Pelikan ink had a rubber squeeze attachment similar to an eye dropper, so an artist could draw up small quantities of ink and put them in a bowl or shallow tray for easier use. Kauffman used the squeeze attachment directly as a drawing tool. The line that resulted was uneven, sometimes broken, and it revealed the direct and somewhat uncontrolled way in which it was made. This approach to ink drawing was like a Western means of creating some of the spontaneity associated with Asian calligraphy. 2

Architecture was one of the artist’s passions since his teenage years. Kauffman was highly inﬂuenced by reading Kindergarten Chats, by Louis Sullivan and A New Vision, from Material to Architecture, by Laszlo Moholy-Nagy. These books lay out the foundations of modern art. Intended to inform readers about the elements of Bauhaus design, the text by Moholy-Nagy merges theory, art and design. The inﬂuence on Kauffman, and on his desire to create a new way of seeing the world through art, was profound. Kauffman’s architectural elements in the Numbers paintings also reﬂect his own practical experience of building. In the later

decades of his life, Kauffman designed several homes, including four in the Philippines and one in the Central California town of Arroyo Grande. His eye and hand were naturally drawn to architecture, a profession he considered when he ﬁrst entered college at the University of Southern California. The Numbers paintings contain some of the simple architecture of the Philippines, known as Kubo bamboo houses.

These eight paintings were not shown in Los Angeles, although some were included in the large survey of Los Angeles painting, Abstraction, mounted by the Nagoya City Art Museum in 1990. 3 That Nagoya exhibit included the work of Kauffman, Sam Francis, John Altoon, John McLaughlin and Ed Moses. The eight major paintings in the current show are accompanied by ﬁve works on paper. --Frank Lloyd ________________________

The paintings present a merging of all of these elements: architecture, calligraphy, and painting. They are held together by the network of lines, executed in an architect’s italic block numbers. But the unity is also achieved by Kauffman’s extraordinary ability with brilliant color combinations—from the rich reddish column on the left to the subtle whites and greys on the right, or the overlays of red and green.

Craig Kauffman: The Numbers Paintings from 1989

With eighteen color reproductions and a short essay by Frank Lloyd, this catalogue documents the third exhibition to be drawn from the Estate of Craig Kauffman (1932-2010). Presenting a series of paintings made by Kauffman in 1989, the exhibition highlighted Kauffman's interest in the unorthodox application of paint, and his integration of sensuous color with architectural form. 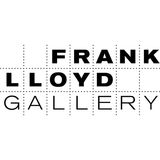