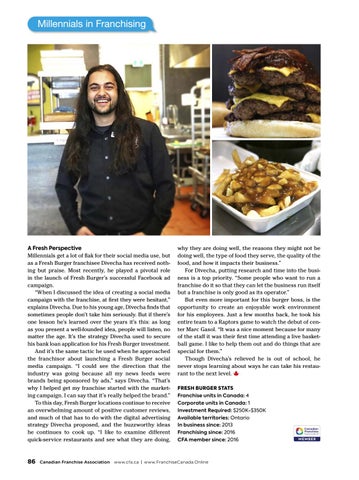 A Fresh Perspective Millennials get a lot of flak for their social media use, but as a Fresh Burger franchisee Divecha has received nothing but praise. Most recently, he played a pivotal role in the launch of Fresh Burger’s successful Facebook ad campaign. “When I discussed the idea of creating a social media campaign with the franchise, at first they were hesitant,” explains Divecha. Due to his young age, Divecha finds that sometimes people don’t take him seriously. But if there’s one lesson he’s learned over the years it’s this: as long as you present a well-founded idea, people will listen, no matter the age. It’s the strategy Divecha used to secure his bank loan application for his Fresh Burger investment. And it’s the same tactic he used when he approached the franchisor about launching a Fresh Burger social media campaign. “I could see the direction that the industry was going because all my news feeds were brands being sponsored by ads,” says Divecha. “That’s why I helped get my franchise started with the marketing campaign. I can say that it’s really helped the brand.” To this day, Fresh Burger locations continue to receive an overwhelming amount of positive customer reviews, and much of that has to do with the digital advertising strategy Divecha proposed, and the buzzworthy ideas he continues to cook up. “I like to examine different quick-service restaurants and see what they are doing,

why they are doing well, the reasons they might not be doing well, the type of food they serve, the quality of the food, and how it impacts their business.” For Divecha, putting research and time into the business is a top priority. “Some people who want to run a franchise do it so that they can let the business run itself but a franchise is only good as its operator.” But even more important for this burger boss, is the opportunity to create an enjoyable work environment for his employees. Just a few months back, he took his entire team to a Raptors game to watch the debut of center Marc Gasol. “It was a nice moment because for many of the staff it was their first time attending a live basketball game. I like to help them out and do things that are special for them.” Though Divecha’s relieved he is out of school, he never stops learning about ways he can take his restaurant to the next level. FRESH BURGER STATS Franchise units in Canada: 4 Corporate units in Canada: 1 Investment Required: $250K-$350K Available territories: Ontario In business since: 2013 Franchising since: 2016 CFA member since: 2016

The Home Improvement and Maintenance Issue 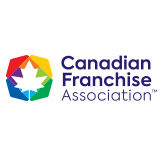