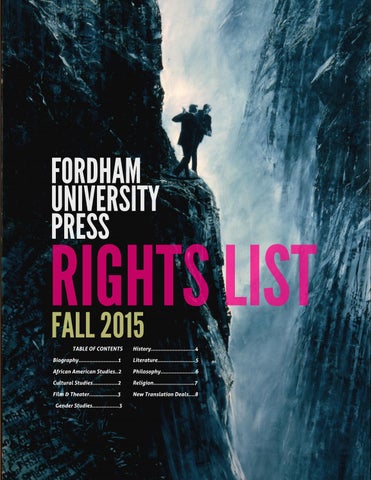 PureAct The Uncommon Life of Robert Lax Michael N. McGregor ?In clear, evocative prose, McGregor brings a triangular tale vividly to life: One side tells the story of Robert Lax?s searching into religion and poetry, a second side reveals his lifelong friendship with Trappist monk and acclaimed author Thomas Merton, and the third is a memoir of McGregor?s own development as a writer through his visits with Lax on Patmos. Lax?s story alone is as strange and gripping as any by Kafka. Read, and you will never forget Robert Lax.? ? Ian MacNiven, author of ?Literchoor Is My Beat?: A Life of James Laughlin, Publisher of New Directions Michael N. McGregor is Professor of English and Creative Writing at Portland State University. 472 pages, 14 b/w illustrations 978-0-8232-6801-6 Cloth, $34.95

TheAmazingAdventuresof BobBrown A Real-Life Zelig Who Wrote His Way Through the 20th Century Craig Saper ?A cross between an intellectual biography of this literary dynamo and a picaresque novel. Bob Brown has found a sensitive, insightful, and appreciative biographer who knows not only how to narrate (and condense) his amazing adventures but also how to draw the connections that make this overflowing life of letters seem all the more meaningful and significant in our era of digital multimedia.? ? Louis Kaplan, Professor of History and Theory of Photography and New Media, University of Toronto Craig Saper is Professor and Director of the Language, Literacy, and Culture Doctoral Program at the University of Maryland, Baltimore. 288 pages, 52 b/w illustrations 978-0-8232-7146-7 Paper, $24.95 978-0-8232-7145-0 Cloth, $90.00 Empire State Editions May 2016

WhoCanAffordtoImprovise? James Baldwin and Black Music, the Lyric and the Listeners Ed Pavli? ?Ed Pavli??s words have always heard the music and with Who Can Afford to Improvise? he shows the exquisite ways that James Baldwin?s words both heard the music and was the music itself.? ? Mark Anthony Neal, author of Looking for Leroy: Illegible Black Masculinities ?Who Can Afford to Improvise? is a tour de force from one of our premier Baldwin scholars. Ed Pavli??s brilliantly insightful meditation on black music and culture and Baldwin?s centrality to that tradition is a must-read.? ? Peniel E. Joseph, author of Dark Days, Bright Nights Ed Pavli? is Professor of English and Creative Writing at the University of Georgia. 352 pages, 20 b/w illustrations 978-0-8232-6848-1 Cloth, $29.95 October 2015 Literature / Music

LiteracyWorkintheReignof HumanCapital Evan Watkins ?Everyone, these days, seems to be an advocate of more and better schools in order to create a more literate workforce. Watkins effectively demonstrates that?s simply not enough? not if we think seriously about literacies and the role they play in reproducing the kinds of economic and social inequalities that have emerged over the course of the past three decades.? ? David Ruccio, Professor of Economics, University of Notre Dame Evan Watkins is Professor of English at the University of California, Davis. He is the author of Class Degrees: Smart Work, Managed Choice, and the Transformation of Higher Education (Fordham). 184 pages 978-0-8232-6423-0 Paper, $24.00

RealizingtheWitch Science, Cinema, and the Mastery of the Invisible Richard Baxstrom and Todd Meyers ?Baxstrom and Meyers?book is more than a meticulous analysis of Benjamin Christensen?s masterpiece HĂ¤xan, more than a model monograph. It finds and charts undiscovered tracks in the field of film studies, tracks that the authors invest with methods of analysis inspired by Warburgian iconology. In the light of their work, the film becomes a privileged way of accessing the history of discourses and representations.? ? Philippe-Alain Michaud, Director and Film Curator, MusĂŠe national d?art moderne??Centre Georges Pompidou Richard Baxstrom is Lecturer in Social Anthropology at the University of Edinburgh. Todd Meyers is Associate Professor of Medical Anthropology at Wayne State University. 296 pages, 64 b/w illustrations 978-0-8232-6825-2 Paper, $29.95 978-0-8232-6824-5 Cloth, $95.00 Forms of Living November 2015 Anthropology / History

Lovecidal Walking with the Disappeared Trinh T. Minh-ha ?Lovecidal: Walking with the Disappeared is filled with provocation and guided by evocation. Encompassing various forms (poetry, treatise, memoir, and historiography) and capaciously conceived, Trinh T. Minh-ha?s contemplation of war, state-authorized violence, state-sanctioned ?security,? and international amnesia is skillfully tempered by observations of beauty, humanity, and resistance. To say that this is an important book is in many ways an understatement; rather, Lovecidal is transformative.? ? Cathy Schlund-Vials, author of War, Genocide, and Justice: Cambodian American Memory Work Trinh T. Minh-ha is a filmmaker, writer, composer and Professor of Rhetoric and of Gender &amp; Women?s Studies at the University of California, Berkeley. 256 pages, 17 b/w illustrations 978-0-8232-7110-8 Paper, $28.00

Cool How Air Conditioning Changed Everything Salvatore Basile ?The all-encompassing guidebook to the history of air conditioning, chronicling the numerous gimmicks, failed attempts, con jobs, and eventual successes ? a surprisingly interesting journey.? ? San Francisco Book Review Salvatore Basile was educated at the Boston Conservatory and The Juilliard School and began his career as a professional musician. After penning various music-related articles, he entered the field of social commentary with his history Fifth Avenue Famous: The Extraordinary Story of Music at St. Patrick?s Cathedral (Fordham). 288 pages, 80 b/w illustrations 978-0-8232-7178-8 Paper, $19.95

ChasingGhosts A Memoir of a Father, Gone to War Louise DeSalvo ?Both a beautifully detailed examination of wartime life and a searingly honest depiction of a fraught father?daughter relationship, Louise DeSalvo?s Chasing Ghosts is a unique and valuable contribution to the literature of World War II.? ? Philip Klay, author of Redeployment, winner of the 2014 National Book Award for Fiction Louise DeSalvo is Jenny Hunter Professor of Creative Writing at Hunter College and the author of several books, including Virginia Woolf: The Impact of Childhood Sexual Abuse on Her Life and Work; Vertigo: A Memoir; and The Art of Slow Writing: Reflections on Time, Craft, and Creativity. 288 pages 978-0-8232-6884-9 Paper, $24.95

Think,Pig! Beckett at the Limit of the Human Jean-Michel Rabaté ?Very few critics have all the qualities and competencies required to engage fully with the entirety of Beckett?s work in all genres: a detailed familiarity with Beckett?s texts in both English and French; a sensitivity to his linguistic, stylistic, and thematic maneuvers; an encyclopedic knowledge of his intellectual context; an awareness of the range and detail of Beckett studies; and an ability to write with refinement and wit. It is clear from this remarkable book that Jean-Michel Rabaté is one of those few.? ? Derek Attridge, University of York Jean-Michel Rabaté is Professor of English and Comparative Literature at the University of Pennsylvania. 264 pages 978-0-8232-7086-6 Paper, $32.00

Theoryat Yale The Strange Case of Deconstruction in America Marc Redfield ?Was the Yale School a media creation? Marc Redfield here offers us both a shrewd account of the quite different contributions of Geoffrey Hartman, Harold Bloom, and Paul de Man to literary studies and a smart, subtle analysis of the myth of the ?Yale School?and its fortunes in the culture wars. An invigorating retrospective on an important chapter in American intellectual history that is not yet over.? ? Jonathan Culler, Cornell University Marc Redfield is Professor of English and Comparative Literature and chair of Comparative Literature at Brown University. 272 pages, 8 b/w illustrations 978-0-8232-6867-2 Paper, $29.95 978-0-8232-6866-5 Cloth, $95.00 Lit Z November 2015 Philosophy

TheEthnographyof Rhythm Orality and Its Technologies Haun Saussy ?Only Haun Saussy? with his historical range, theoretical breadth, and fine close-reading? could have pulled off this brilliant comparative history of ?the perturbation caused by the idea of oral literature.?The disciplinary range of this dazzling scholarly performance takes us from linguistics and philology to ethnography and religious studies, from physiology and psychiatry to the history of graphic and sound technologies. Be prepared to marvel? and learn.? ? Linda Hutcheon, University Professor Emeritus of English and Comparative Literature, University of Toronto Haun Saussy is University Professor at the University of Chicago. 264 pages, 13 b/w illustrations 978-0-8232-7047-7 Paper, $32.00 978-0-8232-7046-0 Cloth, $100.00 Verbal Arts: Studies in Poetics March 2016 Media Studies &amp; Communication

Scatter 1 The Politics of Politics in Foucault, Heidegger, and Derrida Geoffrey Bennington ?Bennington?s Scatter 1 is a sophisticated, detailed, and strikingly original demonstration of the political efficacy of deconstruction. As always with Bennington, to read him is to undergo an education in reading.? ? Robert Bernasconi, Pennsylvania State University Geoffrey Bennington is Asa G. Candler Professor of Modern French Thought at Emory University. His most recent books are Not Half No End: Militantly Melancholic Essays in Memory of Jacques Derrida and GĂŠographie et autres lectures. 344 pages, 5 b/w illustrations 978-0-8232-7053-8 Paper, $35.00

TheMatter of Voice Sensual Soundings Karmen MacKendrick ?The Matter of Voice is a work of philosophical theology in a multidisciplinary and poetic key. Its central organizing insight is that voice and voicing are productive of corporeality and rhythm in language. As MacKendrick shows, at the heart of the voice is ?an irreducible and carnal strangeness?that refuses closure and invites passion back into thinking. The book is a sterling exemplar of the richness that results from attending to the somatic quality of words, yielding a layering of ideas that forms a virtual chorus of multiperspectival thinking.? ? Patricia Cox Miller, Syracuse University Karmen MacKendrick is Professor of Philosophy at Le Moyne College. 224 pages 978-0-8232-7000-2 Paper, $25.00

WhiteEagle,BlackMadonna One Thousand Years of the Polish Catholic Tradition Robert E. Alvis ?Perhaps more than any other nation, Poland has been influenced throughout its history by its relationship to the Roman Catholic Church. For more than a millennium, Poles have defined themselves in great part as members of this church. White Eagle, Black Madonna is the first work in English to examine this important religious?national nexus from its beginnings to the present day. Profoundly researched and written in an engaging manner, this book deserves a broad readership.? ? Theodore Weeks, Southern Illinois University, Carbondale Robert E. Alvis is Academic Dean and Associate Professor of Church History at Saint Meinrad Seminary and School of Theology. 312 pages, 25 b/w illustrations 978-0-8232-7171-9 Paper, $35.00 978-0-8232-7170-2 Cloth, $125.00 August 2016 History

ImagineNoReligion How Modern Abstractions Hide Ancient Realities Carlin A. Barton and Daniel Boyarin ?A timely contribution to a growing and important conversation about the inadequacy of our common category ?religion?for the understanding of many practices, attitudes, emotions, and beliefs? especially of peoples in other times and contexts? that we usually classify as ?religion.?? ? Wayne A. Meeks, Yale University Carlin A. Barton is Professor Emerita in the Department of History at the University of Massachusetts, Amherst. Daniel Boyarin is Hermann P. and Sophia Taubman Professor of Talmudic Culture in the departments of Near Eastern Studies and Rhetoric at the University of California, Berkeley.