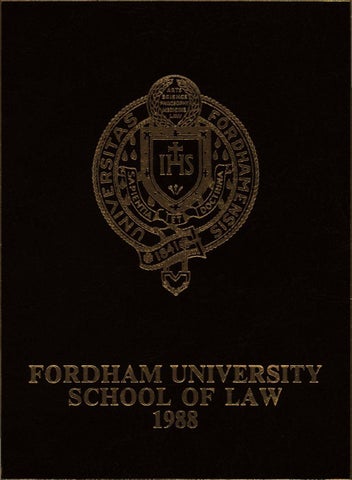 By 1915 extraordinary growth necess itated moving the Law School to the Woolworth Building, then the tallest building in the world. Tuition wa s $180 per annum. Life at the Law School was int e rrupt ed s hortly th e reafter by America's entry into World War I.

T he new building was o pened in 1961 with a dedication speech by Robert Kenned y, A tt orney Genera l of the United States.

A new wing of the law School was completed in October 1984. Key note speaker at this dedication was Supreme Court Justice Sandra Day O'Connor.

In April 1987, New York Governor Mario Cuomo appointed Dean Feerick Chairman of the Commission on Government Integrity. The Commission was created by Executive Order and investigates corruption in the administration of government and determines the adequacy of laws. regulations and procedures relating to government integrity. Announcing the appointment, Gov. Cuomo said he was grateful to Dean Feerick for agreeing to lead the Commission. "His years of practice as one of New York's leading law firms, his record as an impartial but vigorous fact finder , his role in the state and city Bars' work on ethics reform, his accomplishments as a determined advocate of reform , and his leadership of one of the state's great law schools all uniquely qualify him for the position ," the governor stated.

A DEDICATION We the class of 1988 dedicate our yearbook to Prof. Peter J. O'Connor. Prof. O'Connor joined the Fordham Law School faculty in 1974 following an impressive career in both the public and private sector. Prof. O'Connor served as an Assistant District Attorney under N. Y. DA Frank Hogan and as the Chief of the Appeals Bureau in the Queens County District Attorney's Office . He was a partner in the law firm of Keefee. Costikiyan & O'Connor. Prof. O'Connor received his B.A. and J.D. from Fordham and a LLM. from Harvard. He married the former Agnes Shaker in 1956. Mrs. O'Connor graduated from our law school in 1987. Prof. O'Connor has taught a variety of courses at Fordham including N. Y. Practice and Evidence. He is currently writing a book for Little Brown on N.Y . Motion Practice. The entire Fordham community gives special thanks to Prof. O 'Co nnor for his dedica ted service and friendship.

Dean Feerick with two recipients of the 1987 Dean's Medal of Recognition. On the left is Frances G. Berko '44, and on the right is Linda Young, former Assistant Dean of the Law School.

Joe Cerra and Barbara Flynn add a new twist to bobbing for apples.

The Law School Class of 1988 will emerge in a world which needs legal services as much or more than ever. We live in a complex and highly regulated society. The first obligation of a lawyer is to know the substantive law and to analyze and resolve legal problems. That presumably is what you have been doing the last three years. But lawyers must do even more than know the law and the art of practicing it. They need, as well, to develop a consciousness of their moral and social responsibility to their clients, to the courts in which they appear, to the attorneys and clients on the other side of an issue and to others who are affected by the lawyer's conduct. A great lawyer is always mindful of the moral and social aspects of the lawyer's power and position as an officer of the court. My wish for you in the Class of 1988 is that you will try to leave the world a little better than you found it on your arrival; that you will use your talent and legal education to h elp those who need it and in ways which will make all of us in t he legal profession proud of your efforts. Sincerely,

"It was good for Fordham and for New York that we should build here and set our cornerstone in the heart of this 'tight little island,'" recalls University President Emeritus Laurence J. McGinley, SJ. In 1958, with visions of what the future might hold, he strolled across the nothingness that today is Fordham s Lincoln Center campus .

CONGRATULATIONS TO THE GRADUATES OF 1988 FROM

THE FORDHAM UNIVERSITY BOARD OF TRUSTEES

CONGRATULATIONS TO THE CLASS OF 1988!

CONGRATULATIONS AND BEST WISHES TO THE CLASS OF 1988 Rev. Eugene J. O'Brien, S.J. Vice President of University Relations and

AND THE REST OF THE GRADUATING CLASS OF 1988.

CONGRATULATIONS TO THE CLASS OF 1988!

BOARD OF EDITORS AVA MARION PLAKINS

TO CAMELIA AMPARO MARCELINO-RODRIGUEZ AND THE CLASS OF 1988

(There is nothing which persevering effort and unceasing and diligent care cannot overcome.)

From the Advocate Editors & Staff

"Each lawyer must find within his own conscience the touchstone against which to test the extent to which his actions should rise above the minimum standards. But in the last analysis it is the desire for the respect and confidence of the members of his profession and of the society which he serves that should provide to a lawyer the incentive for the highest possible degree of ethical conduct." ABA Code of Professional Responsibility Preamble

With Congratulations And Best Wishes To The Class of 1988

THE ADMINISTRATION, FACULTY AND STAFF OF FORDHAM UNIVERSITY SCHOOL OF LAW

Lawyers know the law no better than other people; they only know where to find it. (attributed to George Ill)

FORDHAM UNIVERSITY SHOP A Service of

THE CLASS OF 1988 Fordham University Graduate School of Social Services

Dear Bob Lendino, What a long hard road it's been, but now you can see the light ahead ... Milbank Tweed is getting the best!!! Congratulations With All Our Love, MOM & DAD & BABY

Sane Smith, Dr. Francis B. Gross, Larry DeSilva, Zodiac, Chuck Savage, Sardu, Flash and the Gang at Dave's 43rd, Angelo and Kenny, #546, The Boys at Fricky's Hideaway, Trim, Chuck Zito and the rest of the Angels, Busty Hart, Dr. Toussie, Akasha, Mr. Brown, Louis Cypher, The Widow Murphy, Freddie Krueger, Morris Winograd, all the Skillets at the Shortshop, Pogo the Clown, Joe Kallinger and the Total Gods, the Acid King, Mamarisse and Adolph Coors, not to mention a whole other group of undesirables, would like to congratulate Mark, Jerry and Paul on the purchase of their law degrees.

Congratulations to the Class of 1988

and BEST WISHES to

BEST WISHES To my brother. . .

He is the Best Robert