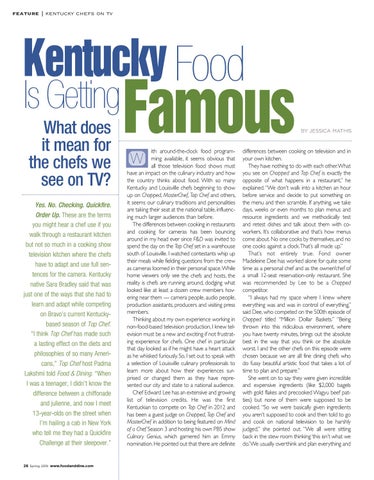 Kentucky Food Is Getting What does it mean for the chefs we see on TV? Yes. No. Checking. Quickfire. Order Up. These are the terms you might hear a chef use if you walk through a restaurant kitchen but not so much in a cooking show television kitchen where the chefs have to adapt and use full sentences for the camera. Kentucky native Sara Bradley said that was just one of the ways that she had to learn and adapt while competing on Bravo’s current Kentuckybased season of Top Chef. “I think Top Chef has made such a lasting effect on the diets and philosophies of so many Americans,” Top Chef host Padma Lakshmi told Food &amp; Dining. “When I was a teenager, I didn’t know the difference between a chiffonade and julienne, and now I meet 13-year-olds on the street when I’m hailing a cab in New York who tell me they had a Quickfire Challenge at their sleepover.”

Famous ith around-the-clock food programming available, it seems obvious that all those television food shows must have an impact on the culinary industry and how the country thinks about food. With so many Kentucky and Louisville chefs beginning to show up on Chopped, MasterChef, Top Chef and others, it seems our culinary traditions and personalities are taking their seat at the national table, influencing much larger audiences than before. The differences between cooking in restaurants and cooking for cameras has been bouncing around in my head ever since F&amp;D was invited to spend the day on the Top Chef set in a warehouse south of Louisville. I watched contestants whip up their meals while fielding questions from the crew as cameras loomed in their personal space. While home viewers only see the chefs and hosts, the reality is chefs are running around, dodging what looked like at least a dozen crew members hovering near them — camera people, audio people, production assistants, producers and visiting press members. Thinking about my own experience working in non-food-based television production, I knew television must be a new and exciting if not frustrating experience for chefs. One chef in particular that day looked as if he might have a heart attack as he whisked furiously. So, I set out to speak with a selection of Louisville culinary professionals to learn more about how their experiences surprised or changed them as they have represented our city and state to a national audience. Chef Edward Lee has an extensive and growing list of television credits. He was the first Kentuckian to compete on Top Chef in 2012 and has been a guest judge on Chopped, Top Chef and MasterChef in addition to being featured on Mind of a Chef Season 3 and hosting his own PBS show Culinary Genius, which garnered him an Emmy nomination. He pointed out that there are definite

differences between cooking on television and in your own kitchen. They have nothing to do with each other. What you see on Chopped and Top Chef is exactly the opposite of what happens in a restaurant,” he explained. “We don’t walk into a kitchen an hour before service and decide to put something on the menu and then scramble. If anything, we take days, weeks or even months to plan menus and resource ingredients and we methodically test and retest dishes and talk about them with coworkers. It’s collaborative and that’s how menus come about. No one cooks by themselves, and no one cooks against a clock. That’s all made up.” That’s not entirely true. Fond owner Madeleine Dee has worked alone for quite some time as a personal chef and as the owner/chef of a small 12-seat reservation-only restaurant. She was recommended by Lee to be a Chopped competitor. “I always had my space where I knew where everything was and was in control of everything,” said Dee, who competed on the 500th episode of Chopped titled “Million Dollar Baskets.” “Being thrown into this ridiculous environment, where you have twenty minutes, brings out the absolute best in the way that you think or the absolute worst. I and the other chefs on this episode were chosen because we are all fine dining chefs who do fussy beautiful artistic food that takes a lot of time to plan and prepare.” She went on to say they were given incredible and expensive ingredients (like $2,000 bagels with gold flakes and precooked Wagyu beef patties) but none of them were supposed to be cooked. “So we were basically given ingredients you aren’t supposed to cook and then told to go and cook on national television to be harshly judged,” she pointed out. “We all were sitting back in the stew room thinking ‘this isn’t what we do.’ We usually overthink and plan everything and 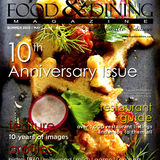