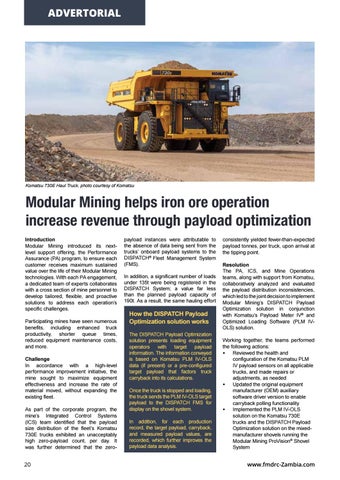 payload instances were attributable to the absence of data being sent from the trucks’ onboard payload systems to the DISPATCH® Fleet Management System (FMS). In addition, a significant number of loads under 135t were being registered in the DISPATCH System; a value far less than the planned payload capacity of 190t. As a result, the same hauling effort

consistently yielded fewer-than-expected payload tonnes, per truck, upon arrival at the tipping point. Resolution The PA, ICS, and Mine Operations teams, along with support from Komatsu, collaboratively analyzed and evaluated the payload distribution inconsistencies, which led to the joint decision to implement Modular Mining’s DISPATCH Payload Optimization solution in conjunction with Komatsu’s Payload Meter IV® and Optimized Loading Software (PLM IVOLS) solution.

In addition, for each production record, the target payload, carryback, and measured payload values, are recorded, which further improves the payload data analysis.

Working together, the teams performed the following actions: • Reviewed the health and configuration of the Komatsu PLM IV payload sensors on all applicable trucks, and made repairs or adjustments, as needed • Updated the original equipment manufacturer (OEM) auxiliary software driver version to enable carryback polling functionality • Implemented the PLM IV-OLS solution on the Komatsu 730E trucks and the DISPATCH Payload Optimization solution on the mixedmanufacturer shovels running the Modular Mining ProVision® Shovel System

Challenge In accordance with a high-level performance improvement initiative, the mine sought to maximize equipment effectiveness and increase the rate of material moved, without expanding the existing fleet. As part of the corporate program, the mine’s Integrated Control Systems (ICS) team identified that the payload size distribution of the fleet’s Komatsu 730E trucks exhibited an unacceptably high zero-payload count, per day. It was further determined that the zero-

Once the truck is stopped and loading, the truck sends the PLM IV-OLS target payload to the DISPATCH FMS for display on the shovel system. 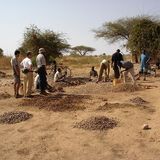