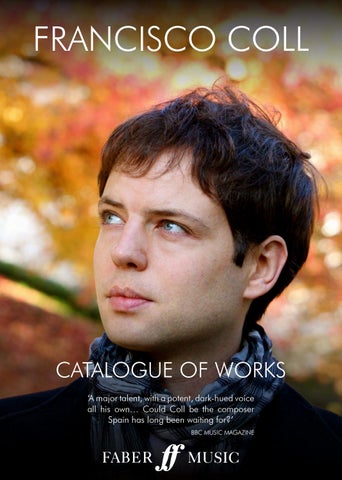 CATALOGUE OF WORKS ‘A major talent, with a potent, dark-hued voice all his own… Could Coll be the composer Spain has long been waiting for?’ BBC MUSIC MAGAZINE

Francisco Coll (b. Valencia, 1985) studied at the Valencia and Madrid Conservatoires before moving to London as a private pupil of Thomas Adès (his only pupil to date). He was also a student at the Guildhall School of Music and Drama, where he won the 2010 Ian Horsburgh Memorial Prize for the best postgraduate composition. Coll’s music has received the advocacy of some of the world’s leading ensembles including the Los Angeles Philharmonic New Music Group, Ensemble intercontemporain, Birmingham Contemporary Music Group, and the London Sinfonietta. In 2014 his chamber opera Café Kafka, to a libretto by Meredith Oakes, premiered to great acclaim in a production by the Royal Opera House Covent Garden, Aldeburgh Music, and Opera North, and has since been staged at the Palau de les Arts Reina Sofia, Valencia. The Piano Concertino ‘No seré yo quien diga nada’, one of several works written as Composer in Association with the Joven Orquesta de la Generalidad Valenciana, was given its UK premiere by Nicolas Hodges and the City of Birmingham Symphony Orchestra under Thomas Adès, and featured at the Aldeburgh Festival. Other festivals that have presented his music include Aspen, Cheltenham, Huddersfield and Verbier. Hidd’n Blue – originally written for the London Symphony Orchestra and FrançoisXavier Roth – has since been performed by the SWR Sinfonieorchester Baden-Baden und Freiburg, Orchestre Philharmonique du Luxembourg, Munich Philharmonic and the Mediterranean Youth Orchestra. In 2016 Coll made his BBC Proms debut with a performance of the Four Iberian Miniatures for violin and chamber orchestra by Augustin Hadelich and the Britten Sinfonia conducted by Thomas Adès. 2016 also saw the premiere of Mural by the Orchestre Philharmonique du Luxembourg under Gustavo Gimeno, and a Harpsichord Concerto for Mahan Esfahani and the Britten Sinfonia. The performance of Mural at the 2017 BBC Proms by Thomas Adès and the National Youth Orchestra of Great Britain was televised, and a recording by La Joven Orquesta Nacional de España under Cristóbal Soler is currently in production.

Coll has written two works for Cuarteto Casals: a short quartet movement entitled Cantos, and a Concerto Grosso for the Orquesta Nacional de España and David Afkham, both of which premiered in 2017. Other recent pieces include Stella, an unaccompanied motet for ORA and Suzi Digby, and Turia, a concerto for guitar and ensemble premiered by Jacob Kellermann and Norrbotten NEO under Christian Karlsen.

Future projects include a second chamber opera – based on Dostoyevsky’s The Dream of a Ridiculous Man – and several works for the violinist Patricia Kopatchinskaja, including a concerto. In 2018 Coll begins a two-season residency with the Orquesta de Valencia.

All other instrument names are given in full.

Café Kafka ‘Quite dazzling, both in terms of its originality and sonically... [The] treatment of disconnected fragments, mainly dialogues, had a Pinterish insouciance with non sequiturs, a dramatic freedom and indeed a poetic quality… Astonishing compositional assurance.’ The Sunday Times (Paul Driver), 23 March 2014

chamber opera in one act for 5 singers and 10 players

‘A major talent, with a potent, dark-hued voice all his own. Oakes has distilled the claustrophobia and despair of Kafka’s writing into a few brief lines that drive a hot-blooded score, voices and instruments sparking off each other in an intimate dance, mirrored by the vivacious jiving on stage… Could Coll be the composer Spain has long been waiting for?’

‘A brightly-coloured high-wire act; its musical coup de théâtre revealed Coll to be a master of his art. This could become a classic.’

‘A witty fantasy set to music of real imagination and prodigious technical skill… it entertains in a sophisticated fashion… My guess is that it will have an afterlife.’

Hidd’n Blue ‘Its scary view of a polarised world of extremes seemed full of Adès-like gestures refracted through an extended scream, leaving only a lone violin wailing. Coll is clearly one to watch.’

‘The piece certainly lives up to Coll’s description as “3D music for a virtuoso orchestra of the 21st century”. It displays a brilliant colouristic range.’

In Extremis ‘The excellence of In Extremis justifies Coll’s residence with the Valenica Youth Orchestra. Its movements are handled by a large and constantly spectacular orchestral apparatus.’

Mural ‘Adès’s only pupil shares his teacher’s ear for alluring orchestral effects. Apollo meets Dionysus, slow and fast movements alternate, fragments of Victoria’s Requiem meet modern anxiety. And Coll is good at endings: a marvellous chord that seems to be at once standing still and teeming with life concludes the central movement, while the finale is pared back to a simple glimpse of E-major purity. Yet when that evaporates, a quiet cluster hangs on – a shadow of doubt.’

‘Vivid instrumental imagery… It is music of extremes, which is constantly reassessing its options and the directions it can take. The whole structure is tethered by a pair of slow movements – the churning, string-dominated canon that’s placed at the centre, and the finale, which opens vast, almost Brucknerian harmonic vistas as it proceeds.’

‘Febrile with imaginative ideas… it does not feel a minute too long.’

Tapias ‘An oddball piece with a tremendous racket that suggested to me, repeatedly, a busy, heavy urban landscape.’

Piano Concertino ‘An elegant, feisty showpiece, full of vividly imagined ideas and quicksilver changes of direction and mood, through which the soloist cavorts like a high-wire artist, over an orchestra… which comments on and supports its act.’ The Guardian (Andrew Clements), 12 June 2014

‘It dances in the stratosphere, tugged back to earth by contrabassoons, contrabass clarinet and sax. In four almost continuous movements, the work is gloriously yet anarchically pianistic.’

cantata for choir and orchestra

Overture after ‘In Extremis’ (2014) orchestra

viola and ensemble of 12 players

Four Iberian Miniatures ‘Hadelich brought bravura technique and personality to his sometimes soulful, sometimes flamboyant solo line as it filtered through the score’s lucid textures… Coll was making his debut as a Proms composer with this witty and attractive piece, whose heritage in the idioms of flamenco and tango was brazenly flaunted.’

‘Like images of Spain seen through an insect’s eye. Spanish elements such as tango and flamenco become flickers of light, colour and rhythm.’

Piedras ‘A sophisticated and daring soundscape of extreme and polarised sonorities, coalescing and sliding between stability and instability.’

‘Coll’s glittering Piedras was positively stuffed with brilliantly focused musical images. A young composer with a fund of fiercely original ideas and all the technique needed to realise them.’

Ad Marginem ‘Soloist Paul Silverthorne’s often combative role successfully took on the brittle brilliance of the ensemble around him.’

Liquid Symmetries ‘A dark, brilliantly inventive evocation of the anxieties of living in the modern age… The piece began as if fired from a gun, the bass and muted trumpet sprinting with jazz-like haste… Coll’s piece showed a young man troubled by the world.’

‘Music that seems to be crammed with ideas, which tumble over each other in a constant state of flux, sometimes bewildering but fabulously vivid.’

‘Coll studied with Adès and has the same gift for ear-popping instrumentations.’

‘Surreal, expressionist and sometimes rather unsettling…’

Harpsichord Concerto ‘With a solo part that’s hyperactive in the outer movements, dark and inward in the central Lento, which is linked to the finale by the briefest of retrospective cadenzas, it has all the characteristics we’ve come to associate with Coll’s works. The disruptive and unstable rhythms, abrupt switches of mood and direction, and intricate, slightly brittle meshing of the harpsichord and the orchestra kept the music constantly on the move, never staying in one place for too long. Even its ending seems provisional.’

mezzo-soprano and ensemble of 17 players

harpsichord and ensemble of 14 players

concerto for guitar and ensemble of 7 players

Score and parts on special sale from the Hire Library

SATB a cappella choir in 8 parts 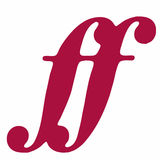