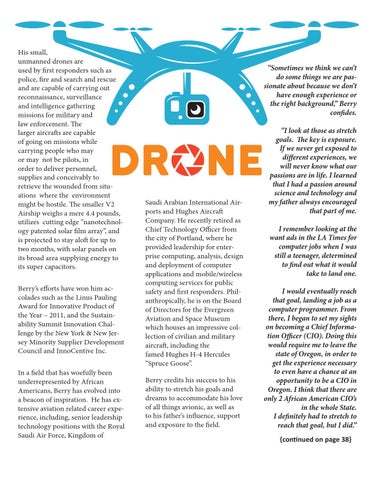 His small, unmanned drones are used by first responders such as police, fire and search and rescue and are capable of carrying out reconnaissance, surveillance and intelligence gathering missions for military and law enforcement. The larger aircrafts are capable of going on missions while carrying people who may or may not be pilots, in order to deliver personnel, supplies and conceivably to retrieve the wounded from situations where the environment might be hostile. The smaller V2 Airship weighs a mere 4.4 pounds, utilizes cutting edge “nanotechnology patented solar film array”, and is projected to stay aloft for up to two months, with solar panels on its broad area supplying energy to its super capacitors. Berry’s efforts have won him accolades such as the Linus Pauling Award for Innovative Product of the Year – 2011, and the Sustainability Summit Innovation Challenge by the New York & New Jersey Minority Supplier Development Council and InnoCentive Inc. In a field that has woefully been underrepresented by African Americans, Berry has evolved into a beacon of inspiration. He has extensive aviation related career experience, including, senior leadership technology positions with the Royal Saudi Air Force, Kingdom of

“Sometimes we think we can’t do some things we are passionate about because we don’t have enough experience or the right background,” Berry confides.

Saudi Arabian International Airports and Hughes Aircraft Company. He recently retired as Chief Technology Officer from the city of Portland, where he provided leadership for enterprise computing, analysis, design and deployment of computer applications and mobile/wireless computing services for public safety and first responders. Philanthropically, he is on the Board of Directors for the Evergreen Aviation and Space Museum which houses an impressive collection of civilian and military aircraft, including the famed Hughes H-4 Hercules “Spruce Goose”. Berry credits his success to his ability to stretch his goals and dreams to accommodate his love of all things avionic, as well as to his father’s influence, support and exposure to the field.

“I look at those as stretch goals. The key is exposure. If we never get exposed to different experiences, we will never know what our passions are in life. I learned that I had a passion around science and technology and my father always encouraged that part of me. I remember looking at the want ads in the LA Times for computer jobs when I was still a teenager, determined to find out what it would take to land one. I would eventually reach that goal, landing a job as a computer programmer. From there, I began to set my sights on becoming a Chief Information Officer (CIO). Doing this would require me to leave the state of Oregon, in order to get the experience necessary to even have a chance at an opportunity to be a CIO in Oregon. I think that there are only 2 African American CIO’s in the whole State. I definitely had to stretch to reach that goal, but I did.” {continued on page 38} 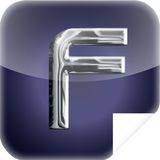