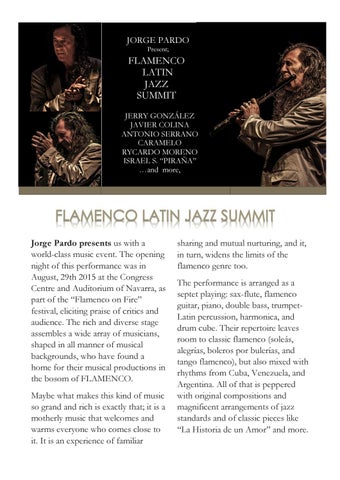 Jorge Pardo presents us with a world-class music event. The opening night of this performance was in August, 29th 2015 at the Congress Centre and Auditorium of Navarra, as part of the “Flamenco on Fire” festival, eliciting praise of critics and audience. The rich and diverse stage assembles a wide array of musicians, shaped in all manner of musical backgrounds, who have found a home for their musical productions in the bosom of FLAMENCO. Maybe what makes this kind of music so grand and rich is exactly that; it is a motherly music that welcomes and warms everyone who comes close to it. It is an experience of familiar

sharing and mutual nurturing, and it, in turn, widens the limits of the flamenco genre too. The performance is arranged as a septet playing: sax-flute, flamenco guitar, piano, double bass, trumpetLatin percussion, harmonica, and drum cube. Their repertoire leaves room to classic flamenco (soleás, alegrías, boleros por bulerías, and tango flamenco), but also mixed with rhythms from Cuba, Venezuela, and Argentina. All of that is peppered with original compositions and magnificent arrangements of jazz standards and of classic pieces like “La Historia de un Amor” and more.

A bit of History, It is a fact that in the last century, we can find proof of flamenco meeting and evolving along with other kinds of music. In particular, flamenco meets Latino and Afro-American rhythms. The birth of this music is probably influenced by the Spanish folklore, and it flourishes around the lively atmosphere of people and cargo (and the music that travelled with them) back in the XVI century in the ports of Seville, Cadiz, and Havana. The Cantes de Ida y Vuelta (roundtrip songs) started as a consequence of this. However, that is not the end of the story, but it carries on until our days. During the late

80’s, early 90’s flamenco goes through another major event: Many musicians from Latin America arrive in Madrid, looking to improve their musical careers. This development creates a deep process aiming to build a community and to cohabitate that is still ongoing between many jazz, flamenco and Latino musicians. Performances and groups of many sorts count with members of this extraordinary band between their lines, either as core constituents or featuring them, but now they come together for this: FLAMENCO LATIN JAZZ SUMMIT

“Flamenco conveys a feeling that fulfills me, and it has rhythm patterns that allow me to play with them.” Jerry González

Jerry Gonzalez is a New Yorker jazz musician with Puerto Rican roots, who lives in Madrid. Trumpeter and percussionist, he is a pioneer of the Latin jazz; he created the legendary “Fort Apache” Band. He studied in the Music &amp; Art High School, the Music College of New York, and New York’s University. From 1984 to 1999 he played with Tito Puente&#39;s Latino jazz ensemble; from 1984 to 1990 with McCoy Tyner&#39;s band (in a sextet and in a big band later on); and from 1984 to 1987 he played with Jaco Pastorius&#39; band. Jerry González’s popularity grew exponentially after his participation in Fernndo Trueba’s film, “Calle 54.”

“I’ve been very lucky in having the opportunity of playing hand in hand with a lot of musicians who have taught me I-don’t-yet-knowhow-much.” Javier Colina

“After studying jazz and classical music, working with Paco de Lucía showed me the depth of flamenco.”

Javier Colina taught himself to play the double bass after learning to play piano. He is a reference for double bass players in both Spain and Europe.

Antonio Serrano started to learn music at the age of 7, mentored by his father, who developed a personal teaching method designed to teach to play any instrument and musical genre using the harmonica as the axial instrument.

He inherited the expressive dynamism from Bill Evans, but he is also an exceptionally versatile musician who dominates effortlessly music as miscellaneous as jazz, Latino music, pop, and, more than anything, flamenco. In this type of music, Colina has taken the lead in the use of the double bass. He is, along with Carles Benavent, one of the greatest exponents of today’s panorama in the world of four-stringinstruments.

Antonio complemented this formation in the conservatoires of Madrid and Alicante, learning to play several instruments. There he starts to gain some notoriety as a harmonica player and he was called by the great Larry Adler, to play with him to a concert for the United Nations in Paris, with Barbara Hendricks and Plácido Domingo. That was the beginning of his career as a classical harmony player.

“Flamenco and jazz have one of their points of convergence in that both are kinds of music that belong to the soul of their people.” Javier Massó “Caramelo”

Javier Massó (Caramelo) is a great musician from Cuba: pianist, composer, arranger, percussionist, and producer. He lives in Madrid, Spain. Javier Massó “Caramelo” is praised by the audience in every stage where he plays. He is considered one of the best Cuban pianists of Latin jazz in the world, capable of fusing any musical genre. His interpretations of flamenco, made side by side with artists as great as Ramón “El Portugués”, Niño Josele, or Duquende, are especially noteworthy.

De Lebrija (Seville 1981) was born into a gypsy family and a mulatto mother, which makes fusion something deeply ingrained in him. The start of his musical career was at age 11 playing the guitar for the cante of his grandmother; “Pepa la Cartuja”, and for his uncles… He is related to Diego Flores “El Lebrijano”, Juaniquí and la Rumbilla de Lebrija, among others. He has played the guitar with Cuarteto Dorantes at the Jazz Festival of San Sebastian, the San Javier Jazz Festival, the Toulouse Jazz Festival, the Paris Jazz Festival, and at the National Music Auditorium.

A creative meeting of immense luxury; a group with an original repertoire and extraordinary arrangements of standards from both sides of the Atlantic considered under the same light. FLUTE SOLO(Camarón, Morente, de Lucia 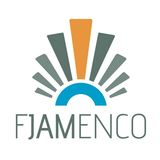