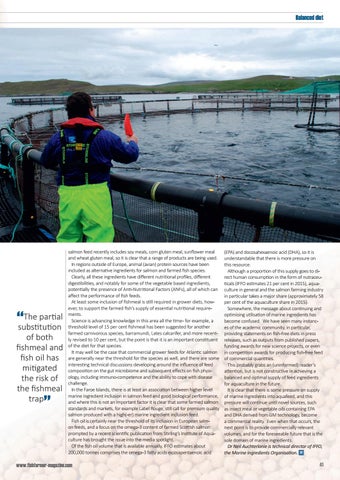 salmon feed recently includes soy meals, corn gluten meal, sunﬂower meal and wheat gluten meal, so it is clear that a range of products are being used. In regions outside of Europe, animal (avian) protein sources have been included as alternative ingredients for salmon and farmed ﬁsh species. Clearly, all these ingredients have diﬀerent nutritional proﬁles, diﬀerent digestibilities, and notably for some of the vegetable based ingredients, potentially the presence of Anti-Nutritional Factors (ANFs), all of which can aﬀect the performance of ﬁsh feeds. At least some inclusion of ﬁshmeal is still required in grower diets, however, to support the farmed ﬁsh’s supply of essential nutritional requirements. Science is advancing knowledge in this area all the time- for example, a threshold level of 15 per cent ﬁshmeal has been suggested for another farmed carnivorous species, barramundi, Lates calcarifer, and more recently revised to 10 per cent, but the point is that it is an important constituent of the diet for that species. It may well be the case that commercial grower feeds for Atlantic salmon are generally near the threshold for the species as well, and there are some interesting technical discussions developing around the inﬂuence of feed composition on the gut microbiome and subsequent eﬀects on ﬁsh physiology, including immuno-competence and the ability to cope with disease challenge. In the Faroe Islands, there is at least an association between higher level marine ingredient inclusion in salmon feed and good biological performance, and where this is not an important factor it is clear that some farmed salmon standards and markets, for example Label Rouge, still call for premium quality salmon produced with a high(-er) marine ingredient inclusion feed. Fish oil is certainly near the threshold of its inclusion in European salmon feeds, and a focus on the omega-3 content of farmed Scottish salmon prompted by a recent scientiﬁc publication from Stirling’s Institute of Aquaculture has brought the issue into the media spotlight. Of the ﬁsh oil volume that is available annually, IFFO estimates about 200,000 tonnes comprises the omega-3 fatty acids eicosapentaenoic acid

(EPA) and docosahexaenoic acid (DHA), so it is understandable that there is more pressure on this resource. Although a proportion of this supply goes to direct human consumption in the form of nutraceuticals (IFFO estimates 21 per cent in 2015), aquaculture in general and the salmon farming industry in particular takes a major share (approximately 58 per cent of the aquaculture share in 2015). Somewhere, the message about continuing and optimising utilisation of marine ingredients has become confused. We have seen many instances of the academic community, in particular, providing statements on ﬁsh-free diets in press releases, such as outputs from published papers, funding awards for new science projects, or even in competition awards for producing ﬁsh-free feed of commercial quantities. This probably grabs an (uninformed) reader’s attention, but is not constructive in achieving a balanced and optimal supply of feed ingredients for aquaculture in the future. It is clear that there is some pressure on supply of marine ingredients into aquafeed, and this pressure will continue until novel sources, such as insect meal or vegetable oils containing EPA and DHA derived from GM technology, become a commercial reality. Even when that occurs, the next point is to provide commercially relevant volumes, and for the foreseeable future that is the sole domain of marine ingredients. Dr Neil Auchterlonie is technical director of IFFO, the Marine Ingredients Organisation. FF 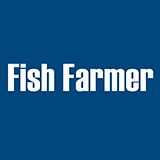