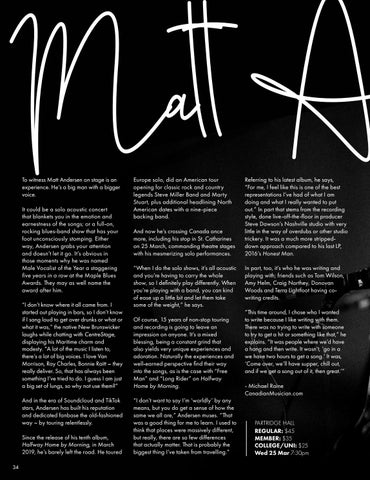 A t t a M To witness Matt Andersen on stage is an experience. He’s a big man with a bigger voice. It could be a solo acoustic concert that blankets you in the emotion and earnestness of the songs; or a full-on, rocking blues-band show that has your foot unconsciously stomping. Either way, Andersen grabs your attention and doesn’t let it go. It’s obvious in those moments why he was named Male Vocalist of the Year a staggering five years in a row at the Maple Blues Awards. They may as well name the award after him. “I don’t know where it all came from. I started out playing in bars, so I don’t know if I sang loud to get over drunks or what or what it was,” the native New Brunswicker laughs while chatting with CentreStage, displaying his Maritime charm and modesty. “A lot of the music I listen to, there’s a lot of big voices. I love Van Morrison, Ray Charles, Bonnie Raitt – they really deliver. So, that has always been something I’ve tried to do. I guess I am just a big set of lungs, so why not use them?” And in the era of Soundcloud and TikTok stars, Andersen has built his reputation and dedicated fanbase the old-fashioned way – by touring relentlessly. Since the release of his tenth album, Halfway Home by Morning, in March 2019, he’s barely left the road. He toured 34

And now he’s crossing Canada once more, including his stop in St. Catharines on 25 March, commanding theatre stages with his mesmerizing solo performances. “When I do the solo shows, it’s all acoustic and you’re having to carry the whole show, so I definitely play differently. When you’re playing with a band, you can kind of ease up a little bit and let them take some of the weight,” he says. Of course, 15 years of non-stop touring and recording is going to leave an impression on anyone. It’s a mixed blessing, being a constant grind that also yields very unique experiences and adoration. Naturally the experiences and well-earned perspective find their way into the songs, as is the case with “Free Man” and “Long Rider” on Halfway Home by Morning. “I don’t want to say I’m ‘worldly’ by any means, but you do get a sense of how the same we all are,” Andersen muses. “That was a good thing for me to learn. I used to think that places were massively different, but really, there are so few differences that actually matter. That is probably the biggest thing I’ve taken from travelling.”

Referring to his latest album, he says, “For me, I feel like this is one of the best representations I’ve had of what I am doing and what I really wanted to put out.” In part that stems from the recording style, done live-off-the-floor in producer Steve Dawson’s Nashville studio with very little in the way of overdubs or other studio trickery. It was a much more strippeddown approach compared to his last LP, 2016’s Honest Man. In part, too, it’s who he was writing and playing with; friends such as Tom Wilson, Amy Helm, Craig Northey, Donovan Woods and Terra Lightfoot having cowriting credits. “This time around, I chose who I wanted to write because I like writing with them. There was no trying to write with someone to try to get a hit or something like that,” he explains. “It was people where we’d have a hang and then write. It wasn’t, ‘go in a we have two hours to get a song.’ It was, ‘Come over, we’ll have supper, chill out, and if we get a song out of it, then great.’” - Michael Raine CanadianMusician.com 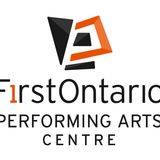