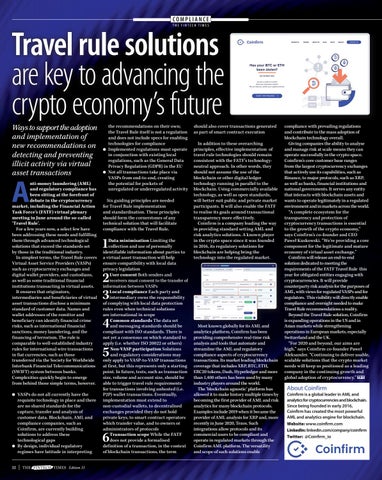 nti-money laundering (AML) and regulatory compliance has been sitting at the forefront of debate in the cryptocurrency market, including the Financial Action Task Force’s (FATF) virtual plenary meeting in June around the so-called ‘Travel Rule’. For a few years now, a select few have been addressing these needs and fulfilling them through advanced technological solutions that exceed the standards set by those in the traditional industry. In simplest terms, the Travel Rule covers Virtual Asset Service Providers (VASPs) such as cryptocurrency exchanges and digital wallet providers, and custodians, as well as some traditional financial institutions transacting in virtual assets. It ensures that originators, intermediaries and beneficiaries of virtual asset transactions disclose a minimum standard of customer data. Names and wallet addresses of the remitter and beneficiary can identify financial crime risks, such as international financial sanctions, money laundering, and the financing of terrorism. The rule is comparable to well-established industry rules for international wire transactions in fiat currencies, such as those transferred via the Society for Worldwide Interbank Financial Telecommunications (SWIFT) system between banks. Complexities quickly begin to emerge from behind those simple terms, however. VASPs do not all currently have the requisite technology in place and there are no shared standards for the capture, transfer and analysis of customer data. Blockchain, AML and compliance companies, such as Coinfirm, are currently building solutions to address these technological gaps ● By design, individual regulatory regimes have latitude in interpreting ●

the recommendations on their own; the Travel Rule itself is not a regulation and does not include specs for enabling technologies for compliance ● Implemented regulations must operate in conjunction with existing local regulations, such as the General Data Privacy Regulation (GDPR) in the EU ● Not all transactions take place via VASPs from end-to-end, creating the potential for pockets of unregulated or underregulated activity Six guiding principles are needed for Travel Rule implementation and standardisation. These principles should form the cornerstones of any technical solution that will facilitate compliance with the Travel Rule.

Data minimisation Limiting the collection and use of personally identifiable information about parties to a virtual asset transaction will help ensure compatibility with local data privacy legislation User consent Both senders and receivers must consent to the transfer of information between VASPs Local compliance Each party and intermediary owns the responsibility of complying with local data protection rules even when technical solutions are international in scope Common standards The data set and messaging standards should be compliant with ISO standards. There is not yet a consensus on which standard to apply (i.e. whether ISO 20022 or others) Non-VASP participation Solutions and regulatory considerations may only apply to VASP-to-VASP transactions at first, but this represents only a starting point. In future, tests, such as transaction size, volume and account size, should be able to trigger travel rule requirements for transactions involving unhosted (i.e. P2P) wallet transactions. Eventually, implementation must extend to non-custodial wallets, to decentralised exchanges provided they do not hold private keys, to smart contract operators which transfer value, and to owners or administrators of protocols Transaction scope While the FATF does not provide a formalised definition of a transaction, in the context of blockchain transactions, the term

should also cover transactions generated as part of smart contract execution In addition to these overarching principles, effective implementation of travel rule technologies should remain consistent with the FATF’s technologyneutral approach. In other words, they should not assume the use of the blockchain or other digital ledger technology running in parallel to the blockchain. Using commercially available technology, as well as open standards, will better suit public and private market participants. It will also enable the FATF to realise its goals around transactional transparency more effectively. Coinfirm is a company leading the way in providing standard setting AML and risk analytics solutions. A known player in the crypto space since it was founded in 2016, its regulatory solutions for blockchain are helping bring the technology into the regulated market.

Most known globally for its AML and analytics platform, Coinfirm has been providing comprehensive real-time risk analysis and tools that automate and streamline the AML and regulatory compliance aspects of cryptocurrency transactions. Its market leading blockchain coverage that includes XRP, BTC, ETH, ERC20 tokens, Dash, Hyperledger and more than 1,400 others has been used by many industry players around the world. The ‘blockchain agnostic’ platform has allowed it to make history multiple times by becoming the first provider of AML and risk analytics for many blockchain protocols. Examples include 2019 when it became the provider of AML analysis for XRP and, more recently in June 2020, Tezos. Such integrations allow protocols and its commercial users to be compliant and operate in regulated markets through the Coinfirm AML platform. The versatility and scope of such solutions enable

compliance with prevailing regulations and contribute to the mass adoption of blockchain technology overall. Giving companies the ability to analyse and manage risk at scale means they can operate successfully in the crypto space. Coinfirm’s core customer base ranges from the largest cryptocurrency exchanges that actively use its capabilities, such as Binance, to major protocols, such as XRP, as well as banks, financial institutions and national governments. It serves any entity that interacts with blockchain assets and wants to operate legitimately in a regulated environment and in markets across the world. “A complete ecosystem for the transparency and protection of cryptocurrency transactions is essential to the growth of the crypto economy,” says Coinfirm’s co-founder and CEO Paweł Kuskowski. “We’re providing a core component for the legitimate and mature economy of virtual asset exchange.” Coinfirm will release an end-to-end solution dedicated to meeting the requirements of the FATF Travel Rule this year for obligated entities engaging with cryptocurrencies. It will provide counterparty risk analysis for the purposes of AML, with views for regulated VASPs and for regulators. This visibility will directly enable compliance and oversight needed to make Travel Rule recommendations a reality. Beyond the Travel Rule solution, Coinfirm is expanding operations in the US and in Asian markets while strengthening operations in European markets, especially Switzerland and the UK. “For 2020 and beyond, our aims are high,” says Coinfirm co-founder Paweł Aleksander. “Continuing to deliver usable, scalable solutions that the crypto market needs will keep us positioned as a leading company in the continuing growth and global adoption of cryptocurrency.”

In this edition guest editor Ruth Wandhöfer and David Birch are going deep into everything ‘digital’! With all the stuff going on around us – the pandemic being the biggest force of change – digital is being accelerated, implemented and embedded in almost all aspects of our life. An obvious change that many have had to adapt to is, of course, money, which is no longer accepted in some shops as physical cash notes and coins (at least not in the UK). This is where our cover story begins, with a focus on central bank digital currencies (CBDCs), a big topic that, depending on implementation, has the potential to not only redefine how we consumers use money but also how banks manage the payments and money space. 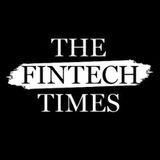