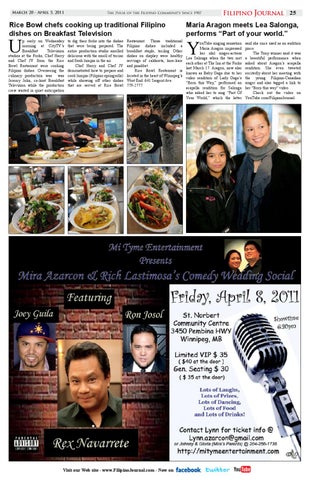 The Pulse of the Filipino Community Since 1987

to dig their forks into the dishes that were being prepared. The entire production studio smelled delicious with the smell of tocino and fresh lumpia in the air. Chef Harry and Chef JV demonstrated how to prepare and cook lumpia (Filipino springrolls) while showing off other dishes that are served at Rice Bowl

Restaurant. Those traditional Filipino dishes included a breakfast staple, tocilog. Other dishes on display were healthy servings of caldareta, kare-kare and pinakbet. Rice Bowl Restaurant is located in the heart of Winnipeg’s West End. 641 Sargent Ave. 779-2777

ouTube singing sensation Maria Aragon impressed her idol singer-actress Lea Salonga when the two met each other at The Inn at the Forks last March 17. Aragon, now also known as Baby Gaga due to her video rendition of Lady Gaga’s “Born this Way,” performed an acapella rendition for Salonga who asked her to sing “Part Of Your World,” which the latter

said she once used as an audition piece. The Tony winner said it was a beautiful performance when asked about Aragon’s acapella rendition. She even tweeted excitedly about her meeting with the young Filipino-Canadian singer and also tagged a link to her “Born this way” video. Check out the video on YouTube.com/FilipinoJournal. 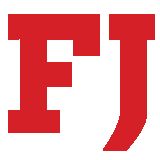