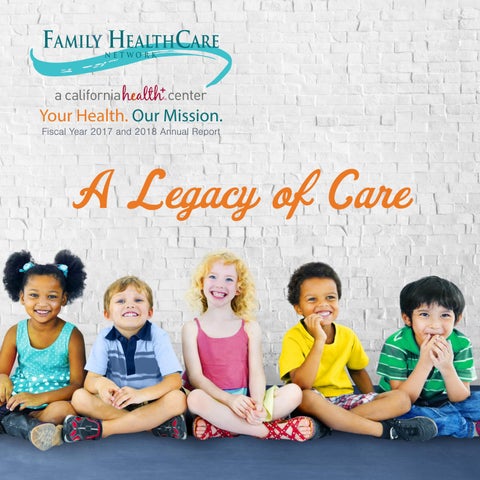 A Legacy of Care

“WE PROVIDE QUALITY HEALTH CARE TO EVERYONE IN THE COMMUNITIES WE SERVE.” -MISSION STATEMENT

Board of Directors Steve Kabot Chairperson

A Message from the President &amp; CEO Family HealthCare Network (FHCN) stands by its mission to provide quality health care to everyone in the communities we serve. For over 40 years, this focus on the needs of our communities has made us one of the largest networks of community health centers both in California and in the United States as a whole.

Highlights from fiscal years 2017 and 2018 (FY 17/18) serve to illustrate our commitment to the communities around us. In FYs 17-18, we served over 253,000 active patients at 30 sites. Our staff size exceeded 1,200 members, which allowed us to work cohesively to ensure that we provide quality care for all, regardless of their ability to pay.

For much of FHCNâ&amp;#x20AC;&amp;#x2122;s history, we have focused on providing high-quality comprehensive primary care and support services. Recently, to better serve our communities, we have expanded our service area to include Tulare, Kings, and Fresno Counties, and added or expanded 15 specialty services to our network. Having enhanced access to these specialties has had a tremendous positive impact on our patients who otherwise would have continued to struggle to access timely specialty care. As the seventh largest community health center in the United States, and the third largest in California, FHCN is also very honored to serve more agricultural workers than any other community health center in the nation. I invite you to learn more about FHCN and its progress in FYs 17-18 in the pages of our annual report. Sincerely,

Humble Beginnings Family HealthCare Network began in 1976 with just one office in a two-room house in Porterville. Then called United Health Organization, the fledgling non-profit clinic was started by a group of dedicated individuals determined to find a way to bring health care to Spanish-speaking farm workers in the area. At that time, only the county hospital in Tulare was providing access to care, however, prenatal care was nearly impossible to receive. The countyâ&amp;#x20AC;&amp;#x2122;s infant mortality rate at the time was a staggering 14.8 for every 1,000 live births.

In 1978, the organization restructured and the Porterville clinic became known as Porterville Family Health Center, Inc. Two providers were added to the staff and in 1980 the program relocated into a gas station/mini-market on Highway 190. This location was renovated and turned into a clinic with six exam

rooms. During these early years, our organization was so successful at serving individuals in the Porterville area that over the next four decades, the building had to be expanded twice to meet community needs. Currently, this health center has 65 exam roomsâ&amp;#x20AC;&amp;#x201D;and still sits on the original site. In 1989, the Board of Directors determined it was time to expand this successful model into other communities also in need of care. The community of Ivanhoe became the first of many expansions that focused on addressing the lack of accessible care. This was followed over the years by sites in multiple communities. During this same time, we expanded not just in size but in range of services provided.

With the opening of this health center, FHCN was the first FQHC to have a health center in the community of Pixley.

Family HealthCare Network relocated and expanded services, staff, and exam rooms in the city of Hanford.

Family HealthCare Network became the first FQHC to provide health care in the community of Strathmore.

Continuity of Care with a Provider &amp; Care Team

Innovative Partnerships to Expand Care Through an innovative partnership with Community Medical Center, the regionâ&amp;#x20AC;&amp;#x2122;s largest health care system, and UCSF Fresno Medical Education Program, Family HealthCare Network assumed the operations of three primary and specialty care centers located in downtown Fresno. The new locations include the Deran Koligian Ambulatory Care Center, the Surgical Services Center, and the Disease Management Center. Family HealthCare Network will work with the UCSF Fresno Medical Education Program to continue training residents and fellows within our clinics. The innovative partnership builds upon our strengths to meet the growing demand for health care services in the Valley.

Family HealthCare Network launched its first Mobile Health Center in May 2017 and expanded with a Mobile Dental Health Center in April 2018. The Mobile Health Centers allow us to offer medical and dental services in communities without a stationary health center, including: preventative screenings, health exams, well child exams, immunizations, lab services, dental services, and enrollment assistance. Through several partnerships with community entities, FHCN has been able to provide convenient access to care for individuals without the resources to travel.

Family HealthCare Network launched a pilot Diabetic Clinic in January 2017. The Diabetic Clinic gave patients the opportunity to understand risky behaviors, explore ways to manage their nutrition by viewing a cooking demonstration, and set goals with a nutritionist and provider. The Diabetic Clinic pilot produced tremendous success between a cohort and control group of patients. 7.5% decrease in Hgba1c for cohort vs. 1.5% increase for control 60% of cohort with BP under 140/90 vs. 50% of control

Overwhelming positive feedback from participants â&amp;#x20AC;&amp;#x153;I really liked the ability to question people who were experts in their field.â&amp;#x20AC;? -Diabetic Clinic Patient

Primary Care As a patient-centered health home, FHCN offers a wide range of comprehensive primary care services to meet the needs of the communities served. Primary care services are also integrated in to one location to improve accessibility for individuals and families to address their health care needs. Services such as family medicine, pediatrics, obstetrics and gynecology, internal medicine, adult and childrenâ&amp;#x20AC;&amp;#x2122;s dentistry, optometry, pharmacy, and chiropractic services complement ancillary and specialty services offered at FHCN health centers. Fiscal years 2017 and 2018 were no exception to FHCNâ&amp;#x20AC;&amp;#x2122;s continued success in offering a patientcentered model of care as noted in the Fiscal yearâ&amp;#x20AC;&amp;#x2122;s highlights.

3,891 APPLICATIONS FOR ENROLLMENT INTO SPECIAL PROGRAMS*

104 FAMILIES, INCLUDING 260 CHILDREN, SUPPORTED THROUGH THE ANITA FUND

4,293 APPLICATIONS FOR ENROLLMENT INTO SPECIAL PROGRAMS*

108 FAMILIES, INCLUDING 256 CHILDREN, SUPPORTED THROUGH THE ANITA FUND 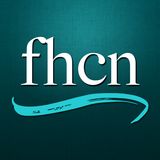