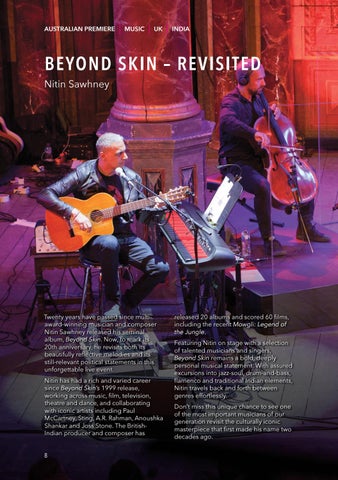 Twenty years have passed since multiaward-winning musician and composer Nitin Sawhney released his seminal album, Beyond Skin. Now, to mark its 20th anniversary, he revisits both its beautifully reflective melodies and its still-relevant political statements in this unforgettable live event. Nitin has had a rich and varied career since Beyond Skin’s 1999 release, working across music, film, television, theatre and dance, and collaborating with iconic artists including Paul McCartney, Sting, A.R. Rahman, Anoushka Shankar and Joss Stone. The BritishIndian producer and composer has 8

released 20 albums and scored 60 films, including the recent Mowgli: Legend of the Jungle. Featuring Nitin on stage with a selection of talented musicians and singers, Beyond Skin remains a bold, deeply personal musical statement. With assured excursions into jazz-soul, drum-and-bass, flamenco and traditional Indian elements, Nitin travels back and forth between genres effortlessly. Don’t miss this unique chance to see one of the most important musicians of our generation revisit the culturally iconic masterpiece that first made his name two decades ago.