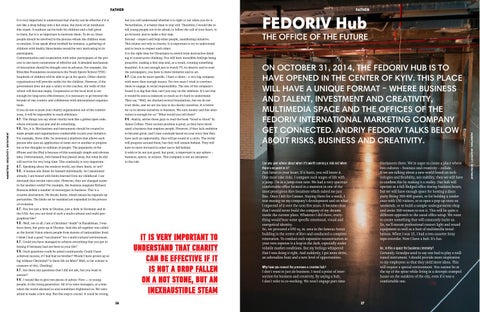 father but you will understand whether it is right or not when you do it. Nevertheless, it is better than to stay still. Therefore, I would like to tell young people not to be afraid, to follow the call of your heart, to go forward, and to make a first step. Second – respect and help other people, manifesting initiative. This relates not only to charity. It is important to try to understand and to learn to respect each other. It is the right time for Ukrainians to switch from destructive thinking to constructive thinking. You will have incredible feelings being proactive, making a first step and, as a result, creating something beautiful. It is not enough just to watch TV, to observe and to read the newspapers; you have to show initiative and to act. A.F.: Can you be more specific. I have a client – a very big company with more than enough money. For two years I tried to convince them to engage in social responsibility. The size of the company’s brand is so big that they can’t just stay on the sidelines. It’s not that it would be seen as indecent so much as it’s hard to understand. They say, “Well, we checked several foundations, but we do not trust them, and we are too lazy to do charity ourselves. It is better for us to devote ourselves to business. We earn money and this motivation is enough for us.” What would you tell them? V.K.: Andriy, advise these guys to read the book “Good to Great” by James Collins. Their current position is good, as they have developed a business that employs people. However, if they lack ambition to become great, and I may conclude based on your story that they have such an opportunity, they will go round in a circle. The world will progress around them, but they will remain behind. They will have to move forward in order not to fall behind. A wish to be not just good, but great, is important in any sphere – business, sports, or science. This company is not an exception to the rule.

If you do not to push your charity organization out of the comfort zone, it will be impossible to reach efficiency. A.F.: The things you say about charity look like a global open code, where everyone can join and do something. V.K.: Yes, it is. Mechanisms and instruments should be created to make people and organizations comfortable to join your initiative. For example, Steve Jobs: he invented a platform that allows each person who uses an application of some sort or another to propose his or her thoughts to millions of people. The popularity of the iPhone and the iPad is because of this seemingly simple and obvious idea. Unfortunately, Jobs himself has passed away, but what he did will survive for very long time. This continuity is very important. A.F.: Speaking about the modern world, are there limits, or not? V.K.: A human sets limits for himself individually. As I mentioned already, I am bound with limits learned from my childhood. I understand that certain rules exist. However, they are changed easier in the modern world! For example, the business magnate Richard Branson defied a number of stereotypes in business. This is a creative destruction. He breaks limits, which means he expands opportunities. The limits set by mankind are expanded in the process of evolution. A.F.: You live just a little in Ukraine, just a little in Germany and in the USA. Are you not tired of such a multi-cultural and multi-geographical life? V.K.: Well, not at all. I am a Ukrainian “made” in Kazakhstan. I was born there, but grew up in Ukraine. And this all together was called as the Soviet Union where people from dozens of nationalities lived. I think I had a good “vaccination” for a multi-cultural environment. A.F.: Could you have managed to achieve everything that you got in boxing if Germany had not been in your life? V.K.: Such questions could be asked continuously. Could I have achieved success, if I had had no brother? Would I have grown up so big without Chernobyl? Is there life on Mars? Well, so far science is unaware of this. (Smiling) A.F.: Are there any questions that I did not ask, but you want to answer? V.K.: I would like to give two pieces of advice. First — to young people, to the rising generation: All of us were teenagers, at a time when the world alarmed us and sometimes frightened us. We were afraid to make a first step. But this step is crucial. It could be wrong,

IT IS VERY IMPORTANT TO UNDERSTAND THAT CHARITY CAN BE EFFECTIVE IF IT IS NOT A DROP FALLEN ON A HOT STONE, BUT AN INEXHAUSTIBLE STEAM 26

THE OFFICE OF THE FUTURE ON OCTOBER 31, 2014, THE FEDORIV HUB IS TO HAVE OPENED IN THE CENTER OF KYIV. THIS PLACE WILL HAVE A UNIQUE FORMAT – WHERE BUSINESS AND TALENT, INVESTMENT AND CREATIVITY, MULTIMEDIA SPACE AND THE OFFICES OF THE FEDORIV INTERNATIONAL MARKETING COMPANY GET CONNECTED. ANDRIY FEDORIV TALKS BELOW ABOUT RISKS, BUSINESS AND CREATIVITY. freelancers there. We’re eager to create a place where two cultures – business and creativity – collide. If we are talking about a new world based on technologies and flexibility, not stability, then we will have to confirm this by making it a reality. Our hub will operate as a full-fledged office during business hours, but we will have enough space for hosting a disco party fitting 300-400 guests, or for holding a conference with 150 visitors, or to open a pop-up store on weekends, or to build a sample undergarments shop and invite 300 women to test it. This will be quite a different approach to the usual office setup. We want to create something that will constantly incite us. So, we’ll mount professional concert light and sound equipment as well as a host of multimedia installations. When I was 15, I had a two-cassette Sony tape-recorder. Now I have a hub. It’s fun.

Can you give advice about when it’s worth running a risk and when there’s no point in it? Just listen to your heart. If it hurts, you will know it. One must take risks. I compare such stages of life with a jump. I’m in a jump even now. We had a very spacious comfortable office located in a mansion in one of the most prestigious Kiev locations which suited me just fine. Once I left for Cannes. Staying there for a week, I was musing on my company’s development and on what I expected of it over the next five years. It became clear that I would never build the company of my dreams inside the current place. Whatever I did there, everything would bear some specific emotional, visual and energetical identity. So, we procured a 650 sq. m. area in the famous Arena building in the centre of Kiev and conducted a complete renovation. To conduct such expansive reconstruction at your own expense is a leap in the dark, especially under volatile market conditions. But my feelings whispered that I was doing it right. And suddenly, I got more drive, an adrenaline buzz and a new level of opportunities.

So, is this a space for business creativity? Certainly. Grandpa used to say one had to play a welltuned instrument. I should provide more inspiration to my employees so that they yield more ideas. This will require a special environment. You cannot be at the tip of the spear while living in a decrepit cramped house on the outskirts of the city, even if it was a comfortable one.

Why have you named the premises a creative hub? I don’t want to just do business. I need a point of intersection for business and creativity. By saying a hub, I don’t refer to co-working. We won’t engage part-time

It is very important to understand that charity can be effective if it is not like a drop falling onto a hot stone, but more of an inexhaustible steam. A stadium can be built for children and a ball given to them, but it is as important to motivate them. To do so, those people should be involved in the process whom the children want to emulate. If we speak about football for instance, a gathering of children with Andriy Shevchenko would be very motivating to its participants. Communication and cooperation with other participants of the process is one more cornerstone of effective aid. A detailed mechanism of interaction should be thought over in advance. For example, the Klitschko Foundation reconstructs the Youth Sports School (YSS): hundreds of children will be able to go in for sports. Other charity organizations will provide outfits for the children. However, if the government does not pay a salary to the coaches, the walls of this school will become empty. Cooperation at the local level is not enough for long-term effectiveness; it is necessary to go beyond the bounds of one country and collaborate with international organizations. 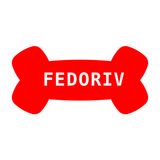