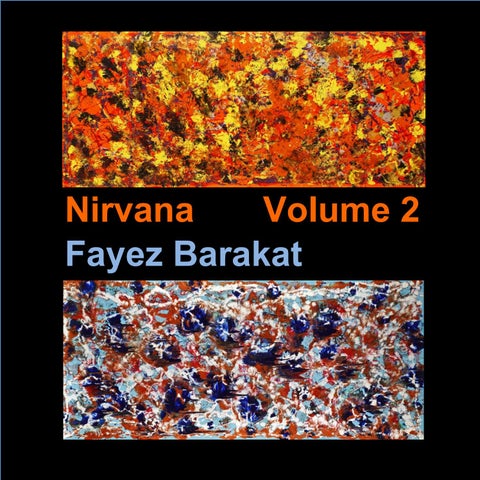 Introduction to Nirvana A question Fayez Barakat poses with his series, Nirvana, is: how can art be used as a vehicle to reach a state of nirvana? Fayez Barakat believes that Nirvana is a state of mind that is different for each one of us. Whatever an individualâ&amp;#x20AC;&amp;#x2122;s speciality, whether it is science, literature, music, or art, Fayez believes that it is possible to reach a level of perfection in oneâ&amp;#x20AC;&amp;#x2122;s practice that will transcend the individual to a state of nirvana. For a musician, excelling at playing notes on his/her instrument can achieve a state of nirvana, for instance. A poet reaches this level of consciousness when his/her words flow seamlessly on the page. For an artist, nirvana is experienced by accomplishing a work of art that touches all of the senses through the creative process. Fayez believes this state of nirvana to be one of the healthiest mental states in life. Utilising vivid colours and eccentric brushstrokes, the artistâ&amp;#x20AC;&amp;#x2122;s aim with this series is to transport the viewer to a state of individual and desired nirvana by engaging them in a truly captivating and multi-sensory experience.

Fayez Barakat (b.1949), one of the world&#39;s most distinguished and prominent collectors of ancient art, was educated in the USA. He is currently the CEO of Barakat Inc. and manages to distribute his time between his galleries in London, LA, Hong Kong, and Seoul, and works on his great passion, painting. Fayez Barakat&#39;s paintings are explosive variations of colours and forms, independent from the conventions of specific cultures, historic periods and trends, charged with a bold energy that openly and without any hesitation embraces and promotes an aesthetic identity through a unique artistic diversity. Being a prolific artist, a vast quantity of his paintings adopt multiple and various techniques rather than sticking to one specific style, his work has the nature of a disciplined practice that drives him as an artist beyond his own limits. Fayez has repeatedly stated that the presence of external forces motivates him to paint, and believes that his paintings are created through his immersion in an unconscious ‘space of energy’, and that viewers of his artworks are also influenced, moved, driven and transported by the power of this energy. A combination of the artist’s experiences in various phases of his life, through different religions and cultures, Fayez’s aesthetic world leads us to a place beyond the orthodox educational and institutional discussions, to a world that can only be reached by virtue of meditating through the body and its senses. Having created a prestigious reputation and dominated the ancient art market with his professional acumen, Fayez Barakat is presently actively captivated by his paintings. We confidently anticipate that his rich oeuvre will expand our sensorial awareness and expose us to new aesthetic levels of consciousness.