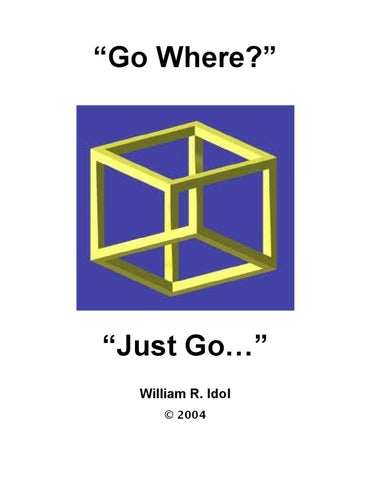 “Go Where?” “Just Go…” Early in my teaching career, I was concerned that what the kids were really learning, especially the brightest ones, was to figure out what the teacher wanted and deliver it rather than think for themselves. In other words, our primary effect was to produce good soldiers, not good citizens. This may be what basic training is about, but it didn't, and doesn't, seem to me to be the vision of any form of education that deserves the name. (Education comes from the Latin word “educare” which means "to lead out from…”). I worked very hard to set up structure that was truly liberating – demanding enough to stretch within empowering limitations. It was called The Media Program and was required for all fifty-five freshmen. There were two major purposes. One was to help the kids develop a basic survival literacy in eight different media (drawing/painting, sculpture, woodworking, movement, music, photography, writing and drama). After all, these were kids who for the rest of their lives were going to get more than 95% of their information from non-print sources. The second purpose was to enhance, rather than inhibit, each student's creativity and capability for self-direction. There were three parts to the structure: • Skill development was focused on two media each month and was conducted and evaluated by the individual teachers as they had always done it. (If I'd tampered with this, the program would've never gotten off the ground.) • Each month began with a "Stimulus Experience" shared by all, and concluded with the students presenting their "Monthly Projects" in a small group setting. These “Projects” were to be uniquely individual responses to the "Stimulus Experience" in one of the two media studied that month. In other words, there were no “right answers" to be found for this part of the structure (we even went to a Pass-Fail grading system for the whole program so faculty could offer suggestions but not threats). • The third part of the structure was helping the kids process the whole experience so they could understand how difficult freedom and ambiguity can be. This was my primary role, and I loved it! I met each week for fifty minutes with all the kids in small groups ranging from six to eight. There was no content agenda to these meetings. I’d just get the kids started talking about what was going on for them in the program that week, and the rest would take care of itself. The story I want to tell you is about the very first week of those meetings. There were nine faculty involved in the program. We were all artistically inclined with matching egos, we were about to launch a controversial program (it replaced the traditional freshmen English class) and we were designing it from scratch. I'd gotten the school to fund a ten day curriculum development

retreat before school started. In hindsight, this was one of the best things we did. It was in these ten days we all came to be comfortable with how the program would work, but, most importantly, we came to respect and trust one another in deep ways essential to such an undertaking. A major task during this retreat was to plan the first Stimulus Experience (SE). This opened a rift among us that threatened the whole program. About half of us insisted the SE had to be as meaningless as we could make it (the term "Happening" was in vogue then). Our reasoning was that the whole point of the program was to get away from the pattern of students success meaning figuring out what the teachers wanted and delivering it, and if we put “meaning” in the SE kids were supposed to find, we'd be right back in that ballgame. The opposing faction felt just as strongly that to deliberately create "meaninglessness" was an abdication of our responsibility, that if we weren't going to use our expertise and experience, then "What was the school paying us for?” We found ourselves caught in the paradoxes the program was meant to encompass. How could we have both experience and innocence, discipline and creativity, direction and freedom? Every leader (teacher, manager and especially parent) must, at some point, confront these paradoxes as fundamental issues of leadership, and, for ten days, we did. It wasn't always easy by a long shot, but we came together, and in the end were united around making the first SE as “meaningless” as we could. More than this, to use they colloquialism of the time, "We really got into it!” Here's what happened. We brought the fifty-five freshmen into the auditorium and sat them in the front rows. This is on the first day of their high school career when they have finally been elevated from "Middle School." We then reviewed the structure of the program and told them what they were about to see would be the basis for their first “Project” four weeks away. Then we left the stage where a pink feather boa was hanging slightly off-center. Steph, the shop teacher, entered from rear left attempting to bounce a deflated beach ball across the stage. He would push it down, look at it puzzledly, pick it up, take a step and push it down again. Gerry, the modern dance teacher, appeared from the right blowing soap bubbles as she crossed the stage ignoring Steph. Meanwhile, Mike, our Greek God of PE, is kneeling underneath the grand piano stage left front grunting loudly over and over as he tries to lift it with his back. Sara of sculpture suddenly appears balleting her way around the stage trailing an Isadora Duncan gauzy scarf. Chauncey, our senior, portly and most distinguished head of the music department, strolls onto stage left, and I enter right reading an unintelligible passage from Schopenhauer in the most professorial tone I can muster. When I finish, I snap the book shut and formally present it to the gray-haired Chauncey. With great seriousness, he balances the book on his head, walks over to the piano where Mike is still grunting, plinks the highest key once and Mike collapses, apparently unconscious, to the floor. There was more I can't remember thirty-five years later, but you get the point. The first SE was truly a wonderfully meaningless experience. And no one ever related to the hanging feather boa. To conclude, we all stood and said, "That’s it. See you with your projects at the end of the month.” © William R. Idol

"What do you mean?" "Just go." "Where?" His voice was plaintive. "Just go." "Do you mean into the hall?" He looked to the others for help. "Just go." "I don't know what you mean!” He stood there, confused and angry. Then it happened. Nancy's face lit up, and she said, "It's like the Projects! He's telling you how we’re supposed to do the projects!” "Yeah, that's it!” exclaimed Frank. “We’re supposed to do the projects like you’re supposed to go!” "He means we have to decide where to go - that they won't tell us,” added Marilyn. All five of those watching got it and understood. They had to help Bob a bit because he was so caught up in the frustration, but it didn't take long. Then we were able to began our conversation about how "growing up" meant not only getting good it going places, but also deciding for yourself which places are worth going to… I repeated this demonstration five times during the rest of that first week, and in each group the same powerful learning occurred. This was the first time I consciously "got it" that the important learnings of life could not be acquired through the safety of intellect alone, and that was because I, as well as Bob and the rest of those kids, went through a profoundly powerful emotional experience of my own…

“Learning is remembering what you already know. Teaching is just reminding others they know as well as you. Doing is proving you can remember.” From Illusions by Richard Bach, “A Manual for Apprentice Messiahs” 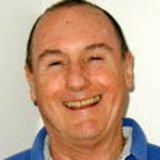 This one FW's earliest attempts to re-establish balance between his rational and non-rational selves - and it turned out to be good for othe...

This one FW's earliest attempts to re-establish balance between his rational and non-rational selves - and it turned out to be good for othe...