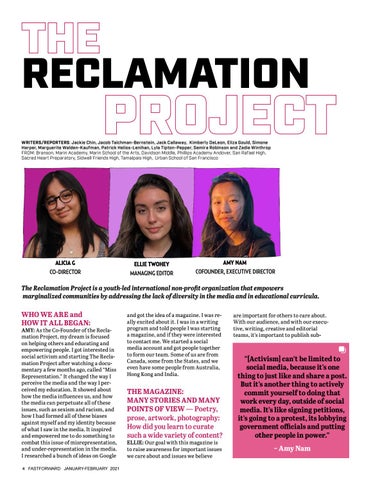 The Reclamation Project is a youth-led international non-profit organization that empowers marginalized communities by addressing the lack of diversity in the media and in educational curricula.

WHO WE ARE and HOW IT ALL BEGAN:

AMY: As the Co-Founder of the Reclamation Project, my dream is focused on helping others and educating and empowering people. I got interested in social activism and starting The Reclamation Project after watching a documentary a few months ago, called “Miss Representation.” It changed the way I perceive the media and the way I perceived my education. It showed about how the media influences us, and how the media can perpetuate all of these issues, such as sexism and racism, and how I had formed all of these biases against myself and my identity because of what I saw in the media. It inspired and empowered me to do something to combat this issue of misrepresentation, and under-representation in the media. I researched a bunch of ideas on Google 4 FASTFORWARD JANUARY-FEBRUARY 2021

and got the idea of a magazine. I was really excited about it. I was in a writing program and told people I was starting a magazine, and if they were interested to contact me. We started a social media account and got people together to form our team. Some of us are from Canada, some from the States, and we even have some people from Australia, Hong Kong and India.

THE MAGAZINE: MANY STORIES AND MANY POINTS OF VIEW — Poetry, prose, artwork, photography: How did you learn to curate such a wide variety of content? ELLIE: Our goal with this magazine is to raise awareness for important issues we care about and issues we believe

are important for others to care about. With our audience, and with our executive, writing, creative and editorial teams, it’s important to publish sub-

“[Activism] can’t be limited to social media, because it’s one thing to just like and share a post. But it’s another thing to actively commit yourself to doing that work every day, outside of social media. It’s like signing petitions, it’s going to a protest, its lobbying government officials and putting other people in power.” ~ Amy Nam

BY KIDS, FOR KIDS View a video collage of interviews conducted by FastForward Adventure Reporters over the years. FastForward is a publication written by kids, for kids. Our youth reporters are budding journalists and dedicated students who are fascinated by the world around them. FastForward provides a platform for students to conduct interviews and write about technology, entertainment, sports and business leaders and events in our community—sharing what they learn with their peers. We also engage in community-based media projects where youth learn new skills, creating media for FastForward and also benefitting other local non-profits. Learning the hardware and software of today’s media helps create citizens who can communicate and express themselves effectively in the 21st century. OUR MISSION is to empower and teach youth the skills to enable them to compete, create and impact their futures. AWARDS FastForward has won a State-wide Media Award from the California School Board Foundati