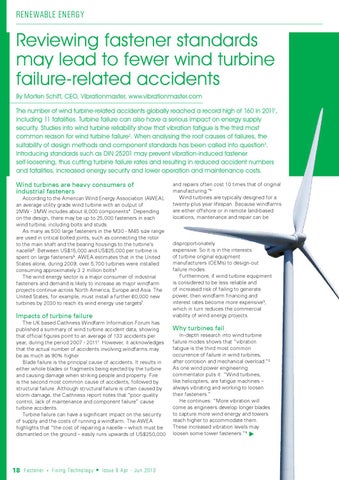 Reviewing fastener standards may lead to fewer wind turbine failure-related accidents By Morten Schiff, CEO, Vibrationmaster, www.vibrationmaster.com The number of wind turbine-related accidents globally reached a record high of 160 in 20111, including 11 fatalities. Turbine failure can also have a serious impact on energy supply security. Studies into wind turbine reliability show that vibration fatigue is the third most common reason for wind turbine failure2. When analysing the root causes of failures, the suitability of design methods and component standards has been called into question3. Introducing standards such as DIN 25201 may prevent vibration-induced fastener self-loosening, thus cutting turbine failure rates and resulting in reduced accident numbers and fatalities, increased energy security and lower operation and maintenance costs. Wind turbines are heavy consumers of industrial fasteners According to the American Wind Energy Association (AWEA), an average utility grade wind turbine with an output of 2MW - 3MW includes about 8,000 components 4. Depending on the design, there may be up to 25,000 fasteners in each wind turbine, including bolts and studs. As many as 500 large fasteners in the M30 - M45 size range are used in critical bolted joints, such as connecting the rotor to the main shaft and the bearing housings to the turbine’s nacelle5. Between US$15,000 and US$25,000 per turbine is spent on large fasteners5. AWEA estimates that in the United States alone, during 2009, over 5,700 turbines were installed consuming approximately 3.2 million bolts 6. The wind energy sector is a major consumer of industrial fasteners and demand is likely to increase as major windfarm projects continue across North America, Europe and Asia. The United States, for example, must install a further 60,000 new turbines by 2030 to reach its wind energy use targets7.

Impacts of turbine failure The UK based Caithness Windfarm Information Forum has published a summary of wind turbine accident data, showing that official figures point to an average of 133 accidents per year, during the period 2007 - 20111. However, it acknowledges that the actual number of accidents involving windfarms may be as much as 90% higher. Blade failure is the principal cause of accidents. It results in either whole blades or fragments being ejected by the turbine and causing damage when striking people and property. Fire is the second most common cause of accidents, followed by structural failure. Although structural failure is often caused by storm damage, the Caithness report notes that “poor quality control, lack of maintenance and component failure” cause turbine accidents. Turbine failure can have a significant impact on the security of supply and the costs of running a windfarm. The AWEA highlights that “the cost of repairing a nacelle – which must be dismantled on the ground – easily runs upwards of US$250,000

and repairs often cost 10 times that of original manufacturing.”4 Wind turbines are typically designed for a twenty-plus year lifespan. Because windfarms are either offshore or in remote land-based locations, maintenance and repair can be

disproportionately expensive. So it is in the interests of turbine original equipment manufacturers (OEMs) to design-out failure modes. Furthermore, if wind turbine equipment is considered to be less reliable and of increased risk of failing to generate power, then windfarm financing and interest rates become more expensive 3, which in turn reduces the commercial viability of wind energy projects.

Why turbines fail In-depth research into wind turbine failure modes shows that “vibration fatigue is the third most common occurrence of failure in wind turbines, after corrosion and mechanical overload.”2 As one wind power engineering commentator puts it: “Wind turbines, like helicopters, are fatigue machines – always vibrating and working to loosen their fasteners.” He continues: “More vibration will come as engineers develop longer blades to capture more wind energy and towers reach higher to accommodate them. These increased vibration levels may loosen some tower fasteners.”9 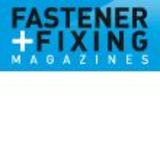