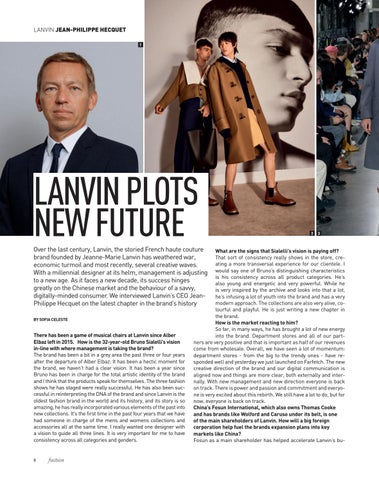 LANVIN PLOTS NEW FUTURE Over the last century, Lanvin, the storied French haute couture brand founded by Jeanne-Marie Lanvin has weathered war, economic turmoil and most recently, several creative waves. With a millennial designer at its helm, management is adjusting to a new age. As it faces a new decade, its success hinges greatly on the Chinese market and the behaviour of a savvy, digitally-minded consumer. We interviewed Lanvin’s CEO JeanPhilippe Hecquet on the latest chapter in the brand’s history BY SOFIA CELESTE

There has been a game of musical chairs at Lanvin since Alber Elbaz left in 2015. How is the 32-year-old Bruno Sialelli’s vision in-line with where management is taking the brand? The brand has been a bit in a grey area the past three or four years after the departure of Alber Elbaz. It has been a hectic moment for the brand, we haven’t had a clear vision. It has been a year since Bruno has been in charge for the total artistic identity of the brand and I think that the products speak for themselves. The three fashion shows he has staged were really successful. He has also been successful in reinterpreting the DNA of the brand and since Lanvin is the oldest fashion brand in the world and its history, and its story is so amazing, he has really incorporated various elements of the past into new collections. It’s the first time in the past four years that we have had someone in charge of the mens and womens collections and accessories all at the same time. I really wanted one designer with a vision to guide all three lines. It is very important for me to have consistency across all categories and genders.

What are the signs that Sialelli’s vision is paying off? That sort of consistency really shows in the store, creating a more transversal experience for our clientele. I would say one of Bruno’s distinguishing characteristics is his consistency across all product categories. He’s also young and energetic and very powerful. While he is very inspired by the archive and looks into that a lot, he’s infusing a lot of youth into the brand and has a very modern approach. The collections are also very alive, colourful and playful. He is just writing a new chapter in the brand. How is the market reacting to him? So far, in many ways, he has brought a lot of new energy into the brand. Department stores and all of our partners are very positive and that is important as half of our revenues come from wholesale. Overall, we have seen a lot of momentum: department stores - from the big to the trendy ones - have responded well and yesterday we just launched on Farfetch. The new creative direction of the brand and our digital communication is aligned now and things are more clear, both externally and internally. With new management and new direction everyone is back on track. There is power and passion and commitment and everyone is very excited about this rebirth. We still have a lot to do, but for now, everyone is back on track. China’s Fosun International, which also owns Thomas Cooke and has brands like Wolford and Caruso under its belt, is one of the main shareholders of Lanvin. How will a big foreign corporation help fuel the brands expansion plans into key markets like China? Fosun as a main shareholder has helped accelerate Lanvin’s bu- 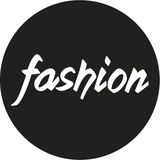