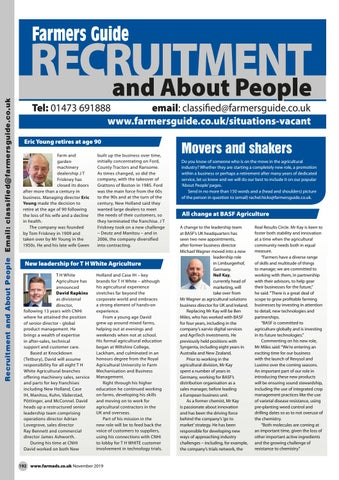 Eric Young retires at age 90 Farm and garden machinery dealership J T Friskney has closed its doors after more than a century in business. Managing director Eric Young made the decision to retire at the age of 90 following the loss of his wife and a decline in health. The company was founded by Tom Friskney in 1909 and taken over by Mr Young in the 1950s. He and his late wife Gwen

built up the business over time, initially concentrating on Ford, County Tractors and Ransome. As times changed, so did the company, with the takeover of Grattons of Boston in 1985. Ford was the main force from the 60s to the 90s and at the turn of the century, New Holland said they wanted large dealers to meet the needs of their customers, so they terminated the franchise. J T Friskney took on a new challenge – Deutz and Manitou – and in 2006, the company diversified into contracting.

Holland and Case IH – key brands for T H White – although his agricultural experience stretches far beyond the corporate world and embraces a strong element of hands-on experience. From a young age David grew up around mixed farms, helping out at evenings and weekends when not at school. His formal agricultural education began at Wiltshire College, Lackham, and culminated in an honours degree from the Royal Agricultural University in Farm Mechanisation and Business Management. Right through his higher education he continued working on farms, developing his skills and moving on to work for agricultural contractors in the UK and overseas. Part of his mission in the new role will be to feed back the voice of customers to suppliers, using his connections with CNHi to lobby for T H WHITE customer involvement in technology trials.

Movers and shakers Do you know of someone who is on the move in the agricultural industry? Whether they are starting a completely new role, a promotion within a business or perhaps a retirement after many years of dedicated service, let us know and we will do our best to include it on our popular ‘About People’ pages. Send in no more than 150 words and a (head and shoulders) picture of the person in question to (email) rachel.hicks@farmersguide.co.uk.

All change at BASF Agriculture A change to the leadership team at BASF’s UK headquarters has seen two new appointments, after former business director Michael Wagner moved into a new leadership role in Limburgerhof, Germany. Neil Kay, currently head of marketing, will take over from Mr Wagner as agricultural solutions business director for UK and Ireland. Replacing Mr Kay will be Ben Miles, who has worked with BASF for four years, including in the company’s xarvio digital services and AgriTech investments. He previously held positions with Syngenta, including eight years in Australia and New Zealand. Prior to working in the agricultural division, Mr Kay spent a number of years in Germany, working for BASF’s distribution organisation as a sales manager, before leading a European business unit. As a former chemist, Mr Kay is passionate about innovation and has been the driving force behind the company’s ‘go to market’ strategy. He has been responsible for developing new ways of approaching industry challenges – including, for example, the company’s trials network, the

Real Results Circle. Mr Kay is keen to foster both stability and innovation at a time when the agricultural community needs both in equal measure. “Farmers have a diverse range of skills and multitude of things to manage; we are committed to working with them, in partnership with their advisors, to help gear their businesses for the future,” he said. “There is a great deal of scope to grow profitable farming businesses by investing in attention to detail, new technologies and partnerships. “BASF is committed to agriculture globally and is investing in its future technologies.” Commenting on his new role, Mr Miles said: “We’re entering an exciting time for our business with the launch of Revysol and Luximo over the coming seasons. An important part of our role in introducing these new products will be ensuring sound stewardship, including the use of integrated crop management practices like the use of varietal disease resistance, using pre-planting weed control and drilling dates so as to not overuse of the chemistry. “Both molecules are coming at an important time, given the loss of other important active ingredients and the growing challenge of resistance to chemistry.”