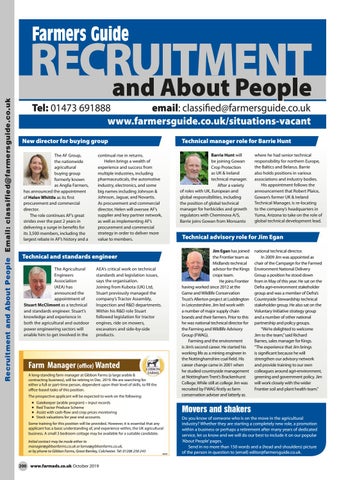 New director for buying group The AF Group, the nationwide agricultural buying group formerly known as Anglia Farmers, has announced the appointment of Helen Whittle as its first procurement and commercial director. The role continues AF’s great strides over the past 2 years in delivering a surge in benefits for its 3,500 members, including the largest rebate in AF’s history and a

continual rise in returns. Helen brings a wealth of experience and success from multiple industries, including pharmaceuticals, the automotive industry, electronics, and some big names including Johnson & Johnson, Jaguar, and Novartis. As procurement and commercial director, Helen will oversee AF’s supplier and key partner network, as well as implementing AF’s procurement and commercial strategy in order to deliver more value to members.

Technical advisory role for Jim Egan Jim Egan has joined the Frontier team as Midlands technical advisor for the Kings crops team. He joins Frontier having worked since 2012 at the Game and Wildlife Conservation Trust’s Allerton project at Loddington in Leicestershire. Jim led work with a number of major supply chain brands and their farmers. Prior to this he was national technical director for the Farming and Wildlife Advisory Group (FWAG). Farming and the environment is Jim’s second career. He started his working life as a mining engineer in the Nottinghamshire coal field. His career change came in 2001 when he studied countryside management at Nottingham Trent’s Brackenhurst College. While still at college Jim was recruited by FWAG firstly as farm conservation adviser and latterly as

Farm Manager (office) Wanted A long-standing farm manager at Gibbon Farms (a large arable & contracting business), will be retiring in Dec. 2019. We are searching for either a full or part-time person, dependent upon their level of skills, to fill the office-based tasks of this position. The prospective applicant will be expected to work on the following:

national technical director. In 2009 Jim was appointed as chair of the Campaign for the Farmed Environment National Delivery Group a position he stood down from in May of this year. He sat on the Defra agri-environment stakeholder group and was a member of Defra’s Countryside Stewardship technical stakeholder group. He also sat on the Voluntary Initiative strategy group and a number of other national partnership and policy groups. “We’re delighted to welcome Jim to the team,” said Richard Barnes, sales manager for Kings. “The experience that Jim brings is significant because he will strengthen our advisory network and provide training to our own colleagues around agri-environment, greening and government policy. Jim will work closely with the wider Frontier soil and plant health team.”

Some training for this position will be provided. However, it is essential that any applicant has a basic understanding of, and experience within, the UK agricultural business. A small 3 bedroom cottage may be available for a suitable candidate. Initial contact may be made either to manager@gibbonfarms.co.uk or lorna@gibbonfarms.co.uk, or by phone to Gibbon Farms, Great Bentley, Colchester. Tel: 01206 250 243

where he had senior technical responsibility for northern Europe, the Baltics and Belarus. Barrie also holds positions in various associations and industry bodies. His appointment follows the announcement that Robert Plaice, Gowan’s former UK & Ireland Technical Manager, is re-locating to the company’s headquarters in Yuma, Arizona to take on the role of global technical development lead.

Do you know of someone who is on the move in the agricultural industry? Whether they are starting a completely new role, a promotion within a business or perhaps a retirement after many years of dedicated service, let us know and we will do our best to include it on our popular ‘About People’ pages. Send in no more than 150 words and a (head and shoulders) picture of the person in question to (email) editor@farmersguide.co.uk.