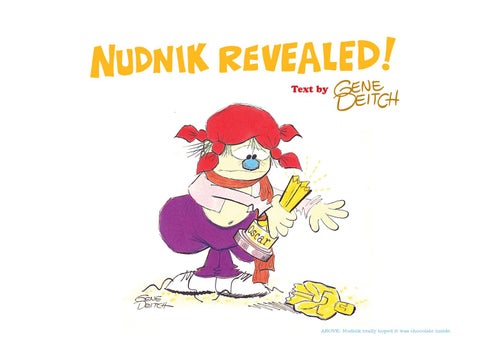 ABOVE: Nudnik really hoped it was chocolate inside.

Nudnik is a loser, a hard-luck character with a near-zero batting average. So why do I love him so? Fate has not been kind to Nudnik, either in his cartoons or in real life. Nudnik’s very first film was nominated for an Oscar (probably because the voters all felt sorry for him). That conned Paramount into ordering 12 episodes for theater showings. No sooner did Nudnik hit the big screen than the entire idea of cartoon shorts in movie theaters collapsed. (Nudnik could have warned Paramount.) Later, one of the hottest hustlers in TV cartoon syndication fell in love with Nudnik and proclaimed that “NudnikMania” was at hand. No sooner did she begin hustling Nudnik than she was offered a better job. Next, Adam Snyder, my partner in all things Nudnik, put together a brilliant package with the catchy title, Gene Deitch Presents the Nudnik Show. (That threatened the entire idea of syndicated TV!) So until we’re offered a Nudnik iPad game (which, incidentally, is a sensational idea!) our last gasp chance to give this hapless creature his due is the very book you now hold in your hands. So I am baring everything — showing you the most secret, never-ever-before-published back story, the inner workings — yes, a full-frontal-nekkid study in Nudnik, stumbles and all. Every sketch, every drawing, every idle pencil, ink, and paint mark in these pages was done by me, and by me alone. (So there’s no one else to blame!) In this book, I present to you the backstory of my fellow striver, Nudnik. No one outside of his natal Prague animation studio has seen any of this before: the idea sketches, the model development, original storyboards, and color scene setups. I also offer some thoughts about the brick wall Nudnik ran into. And I will try to give you some laughs and make you realize that whatever troubles and failures you may suffer, you are

better off than Nudnik. (For proof, I refer you to the excellent DVD of every Nudnik movie ever made, available at last!) You’ll see how and why Nudnik came about (“born” is a questionable term — as is every term that might refer to Nudnik!) I will tell you all about how he stirred within me and what I tried to do to bring him to the screen most important to your life — whether in the theater, on broadcast television, on your home screen, on your computer, or on your favorite portable personal device. Nudnik is proudly in the tramp clown tradition of Emmett Kelly, Otto Griebling, and most especially Buster Keaton, Charlie Chaplin, Red Skelton, and Jackie Gleason. Nudnik was born with a permanent case of the blues. (Witness, even, his nose. Where the typical sad clown’s nose is red, Nudnik’s nose is blue!) When I named him, I thought “Nudnik” suggested a luckless but nonetheless happy loser. But he quickly became a winner — for sure, I thought, when his very first film was nominated for a Hollywood Oscar! Nope. Many pratfalls followed. Nudnik had to wait until now — as Fantagraphics gives him one more shot at fame! Go for it, Nudnik!

OPPOSITE AND ABOVE: My 1964 Nudnik doodles done in the UPA manner, but they couldn't be animated well enough. 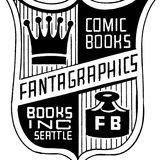