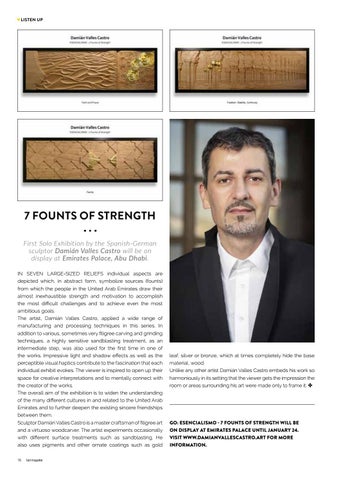 7 FOUNTS OF STRENGTH First Solo Exhibition by the Spanish-German sculptor Damián Valles Castro will be on display at Emirates Palace, Abu Dhabi. IN SEVEN LARGE-SIZED RELIEFS individual aspects are depicted which, in abstract form, symbolize sources (founts) from which the people in the United Arab Emirates draw their almost inexhaustible strength and motivation to accomplish the most difficult challenges and to achieve even the most ambitious goals. The artist, Damián Valles Castro, applied a wide range of manufacturing and processing techniques in this series. In addition to various, sometimes very filigree carving and grinding techniques, a highly sensitive sandblasting treatment, as an intermediate step, was also used for the first time in one of the works. Impressive light and shadow effects as well as the perceptible visual haptics contribute to the fascination that each individual exhibit evokes. The viewer is inspired to open up their space for creative interpretations and to mentally connect with the creator of the works. The overall aim of the exhibition is to widen the understanding of the many different cultures in and related to the United Arab Emirates and to further deepen the existing sincere friendships between them. Sculptor Damián Valles Castro is a master craftsman of filigree art and a virtuoso woodcarver. The artist experiments occasionally with different surface treatments such as sandblasting. He also uses pigments and other ornate coatings such as gold 16

leaf, silver or bronze, which at times completely hide the base material, wood. Unlike any other artist Damián Valles Castro embeds his work so harmoniously in its setting that the viewer gets the impression the room or areas surrounding his art were made only to frame it. ✤

GO: ESENCIALISMO - 7 FOUNTS OF STRENGTH WILL BE ON DISPLAY AT EMIRATES PALACE UNTIL JANUARY 24. VISIT WWW.DAMIANVALLESCASTRO.ART FOR MORE INFORMATION.

Nine realistic resolutions for 2019 - leave the judgement at the door! Here are some great personal goals to kick-start your New Year motivation in Abu Dhabi. Plus, the best in food, fashion, beauty, tech, travel and so much more. Happy New Year, readers! 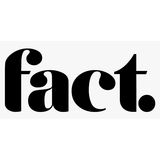